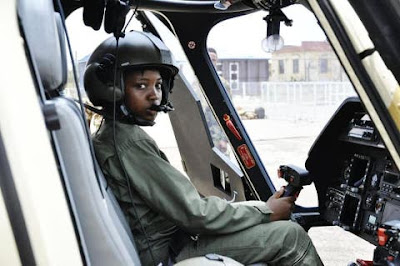 The Kogi-born FO, who died in a car accident on Tuesday in Kaduna State, hailed from the Ijumu Local Government Area of the state.

Arotile was the first female Combat Helicopter Pilot in the history of the Nigerian Air Force.

In a condolence message signed by the Governor’s Chief Press Secretary, Onogwu Muhammed, Bello described Arotile as not only a combat pilot but a fantastic aviator who reached the sky in her professional calling at a very tender age of 23.

The statement partly read, “Late Flying Officer Arotile brought the country to a standstill on the 15th of October 2019 when she was decorated as the first female combat Helicopter Pilot. This was a huge honour to her family and state, the nation, and the entire women in the country and beyond.

“As a trained military aviator, with a blend of professionalism and patriotism, Arotile’s engagement in air-to-ground combat in rooting out armed bandits and other criminal elements in the country, particularly in the North Central region was a sacrifice that cannot be forgotten.

“We are devastated by the tragic death of this young promising lady who took bravery to the next level, demystified prejudicial stereotype and flew her parents, state and nation high in honour and professionalism.

“On behalf of the state, I commiserate with the family of late ‪Flying Officer Arotile‬ over this irreparable loss and I pray that the Almighty God grants her soul eternal rest, She will be sorely missed.”

Muller before Barca: anything can happen in a match of this level
Mammana about moving to Sochi: I will Try to achieve a lot with this great club
Chakyr should not have counted Langle's goal. Ex-referee Andujar Oliver on the Barcelona-Napoli match
Lampard on Chelsea's challenge for the new season: we Don't want to limit ourselves to fighting for the top 4
Lewandowski scored his 66th goal in the Champions League and moved to 4th place, ahead of Benzema. To Raul's 5 goals
Barcelona and Bayern have won the Champions League 10 times. 6 other participants of the 1/4 final of 0 cups
Gennaro Gattuso: Napoli fell asleep for half an hour and gave Barca victory. We dominated and hit more often
Source http://www.nigerianeye.com/2020/07/devastating-national-tragedy-says-bello.html?utm_source=feedburner&utm_medium=feed&utm_campaign=Feed%3A+Nigerianeye+%28NigerianEye%29

Future Of Nigeria’s Golf Is Bright If… – Afolabi

Edo: It’s one week, one trouble

Why the colour of #RevolutionNow was not Arab Spring-red

We will not allow any group to subvert process —Okoye, INEC chief

With love for my brother, Femi Adesina

Insurance Industry Recapitalisation In Midst Of

Verratti included in PSG squad despite continued doubts over availability

I’m happy I forgave Kashamu before he died – Gbenga Daniel

JUST IN: Buruji Kashamu for burial on Sunday

Ize-Iyamu’s endorsement: ‘Shut up, leave us alone’ – Buhari fires back at PDP

Sarri was like an uncomfortable guest at Juventus ― Tacchinardi

NDDC Paid For Contracts Under Duress To Get Budget Approval – Pondei

Appointment of judges in Nigeria is influenced by the elite -Osinbajo

I have been invited to rejoin APC ― Ortom

The world may end before next RCCG convention – Pastor Adeboye

APC wooing me to return, but I’ll not leave PDP — Ortom

Edo: PDP exposes why ‘Tinubu is bitter with Obaseki’