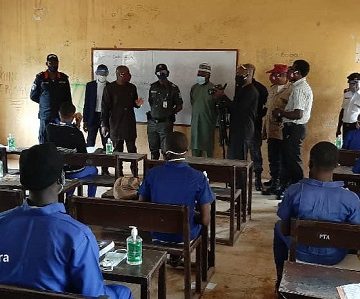 Barely three days after the resumption of schools in the Federal Capital Territory (FCT) to prepare students for their exit examinations, the Chairman, FCTA Ministerial TaskForce on COVID 19 Enforcement, Ikharo Attah, on Thursday, vowed to shut down any school within the territory that violates the COVID 19 protocols recommended for the safety of students.

He made this known while inspecting some schools in Abuja.

According to him: “Any school that fails to comply, we will do everything within our power to safeguard the students. And such schools will likely be shut down through legal processes and the students will have to go and write exams somewhere else, pending when the school complies with the safety guidelines, and those responsible for the school mismanagement will be brought to book.

“The FCT Minister, Mallam Muhammad Musa Bello, has been very clear about it, that he is not going to risk the life of any student or teacher. He said that everyone must come in within the context of safety,” he emphasised.

Attah insisted that the administration could not afford to expose the students to the danger of contracting the virus, and therefore, would not compromise the guidelines for the resumption of the schools.

The chairman confirmed that the compliance level at both private and some public schools within the city centre was commendable.

He, however, frowned at the attitude of the Heads of Model Junior Secondary School, located in Asokoro, for their failure to adequately prepare the school environment before the resumption.

“From our own point it is already encouraging, in the sense that the schools we have been to, both government and private if we assess them at a point of average, you will score them about 85 per cent preparedness. They have complied. You could see handwashing points, hand sanitiser and there was also social distancing in their classrooms.

FG Increases Hate Speech Fine From N500,000 To N5m
THE Federal Government has announced that its newly- unveiled reviewed Nigeria Broadcasting Code has provisions to increase the hate speech fine for people found culpable of hate speech from N500,000 to N5 million. This is as it said the amendment of the broadcasting code is boosting local content, among other provisions…

Mauricio Pochettino: To lead Real Madrid is my dream. I was contacted by Benfica and Monaco
Steaua and Serbia's Backa Topola played 6:6 in the Europa League. For the first time in the history of European competitions, both teams scored 5+
B-36, Senderyuske and Kolos from the village of Kovalevka. These teams, unlike Dynamo, reached the next round of the Europa League
💥 A Europa League match in which everything seems crazy: the score is 6:6, a comeback with five, a winning penalty shootout from the debutant goalkeeper
Depay may move to Milan from Lyon as part of a Package deal
Rafael Benitez: The rivalry with Jose was good for the game. Liverpool were able to compete with Chelsea
Liverpool can play Arsenal, Tottenham can play Chelsea in the 4th round of the League Cup
Source https://tribuneonlineng.com/well-shut-down-schools-violating-covid-19-protocols-%e2%80%95-fcta/

Adamawa PDP faction reacts to split, vows to fight on

Hands Down, These Were the Best Dressed Stars at “The Smart Money Woman” Series Premiere – BellaNaija

Chelsea vs Liverpool: Thiago Alcantara to be unveiled ahead of EPL clash

COVID-19: Survival fund will be available from next week – Presidency tells Nigerians

BBNaija 2020: Why I want Laycon, Dorathy out of Lockdown house – Nengi

COVID-19: We’re beginning to flatten the curve, but… —FG

BBNaija 2020: I almost had sex with Neo – Vee confesses to Laycon

Trump to establish a commission to promote a ‘patriotic education’

Nigeria police, please stop being vampires in our empire

Playstation 5 to debut in stores Nov 12

On Amotekun in Oyo State

War against the poor

Flick: I can only congratulate Klopp on Thiago signing

How ‘The Voice Nigeria’ is discovering, nurturing Nigerian musical talents

Why companies are borrowing huge from money market — Standard Chartered

Children under five don’t have to wear facemasks – FG

It took nine years to get on BBNaija — Prince

Why we brought Saudi Arabia to Ibadan – Halal fashion CEO

I graduated as a civil engineer, but fashion came calling —Timilehin Fagbemi