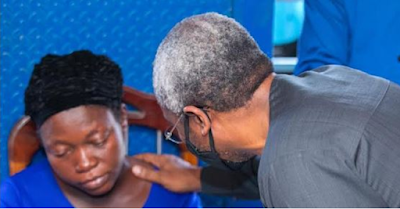 Josephine Okereke, the wife of the newspaper vendor shot and killed by a Department of State Services operative attached to the Speaker of the House of Representatives, Femi Gbajabiamila, has disowned her husband’s family over their demand for N500m compensation.

Josephine spoke at a press conference in Abuja on Thursday.

The family of Ifeanyichukwu Okereke had written to Gbajabiamila, demanding N500m.

Lawyer to the family, Chief Mike Ozekhome (SAN), in a letter dated November 23, 2020, said he was given the mandate to write the letter by the father of the deceased, Okorie Okereke; and the younger brother to the deceased, Destiny Okereke.

The DSS had last week arrested the operative, Abdullahi Hassan, who shot Okereke while Gbajabiamila had also visited the family of the deceased and promised to ensure that they do not suffer.

However, the family demanded more, adding that nothing could bring the dead vendor back to life.

The widow, however, said she was not aware of the pre-litigation process, urging the Speaker to ignore the family fulfil his promises to her and her two children.

Bruno picked up 4 Player of the Month awards in 2020. Ronaldo, Henry and Lampard had the same number-but for a career in the Premier League
Lev - the best coach of the decade in the national teams, Deschamps-2nd, Shevchenko-17th (IFFHS)
Head of the Premier League: We ask players not to hug and change their behavior
Milan had rented the midfielder, Torino Meite until end of season with option to buy
Ramos played on painkillers with Athletic due to knee problems
Barcelona's presidential election is scheduled to take place on March 7
Sir Alex Ferguson: Fortunately, I was retired when I watched Liverpool play in the last two years
Source https://www.nigerianeye.com/2020/11/widow-of-vendor-killed-by-gbajabiamilas.html?utm_source=feedburner&utm_medium=feed&utm_campaign=Feed%3A+Nigerianeye+%28NigerianEye%29

Taking care of your wig

Do you think asking for DNA paternity check on your ward is a lack of trust?

Paternity test: How did we get here?

Good governance has nothing to do with gender —Jane Chris Ezetah

My stolen laptop made me change my research topic ―Kudus Adebayo

Why Nigeria is unable to curb corruption – Lawyers

How I became prominent in Nollywood in just 7 years —Actor, Bolanle Ninalowo

As Museveni dips into more ignominy

Justice Akintan: An iroko that never forgets his roots

Problem of ASUU and the way forward

That Okorocha’s 2023 message to Wike!

Ibadan: The many firsts of an ancient city