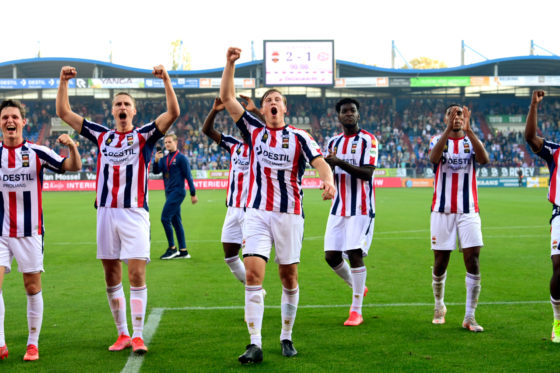 Willem II climbed to second place in the Eredivisie at the expense of Brabant neighbours PSV Eindhoven in a match decided by a goalkeeping blunder.

PSV’s goalkeeper Joël Drommel allowed an a soft shot by Che Nunnely to slip between his fingers in the 76th minute to give the Tilburgers a 2-1 victory.

In the first half PSV striker Eran Zahavi opened the scoring by deflecting a free-kick into his own net, before making amends with the equaliser after half an hour.

Defeat for Roger Schmidt’s side allowed Ajax to stretch their lead at the top to three points with a routine 3-0 win over Groningen.

Steven Berghuis set up the opener for Edson Álvarez with a floating cross and then released Antony to cut in from the right for the second. Noussair Mazraoui added a third with a crisp finish late in the game.

Feyenoord moved up to third, ahead of PSV on goal difference, as they won an eight-goal thriller against NEC Nijmegen in a packed De Kuip.

The visitors came back from 2-0 down to lead 3-2 when Calvin Verdonk found the top coroner in the 74th minute. But Guus Til headed in an equaliser six minutes leader and then put Feyenoord back in front in the 89th minute, before Cyriel Dessers made sure of the points in injury time.

Cambuur Leeuwarden looked a different outfit from the side that suffered a 9-0 reverse to Ajax as they beat Sparta 4-0 in Rotterdam, including two goals from the impressive Issa Kallon.

AZ Alkmaar also banished their early season blues as they strolled to a 5-0 win against Go Ahead Eagles. Jesper Karlsson scored twice, including a penalty, while Yukinari Sugawara set up goals for Dani de Wit and Zakaria Aboukhlal before Tijani Reijnders added a fifth from long-range.

Twente Enschede took a 2-0 lead into the break at Heerenveen and went further ahead when Sven van Beek miscued a back-pass into his own net in the 65th minute. But it turned out to be vital as the Frisians cut the deficit with a Robin Pröpper own goal and Henk Veerman’s fifth of the season.

PEC Zwolle’s miserable start continued as they went down 5-1 in Utrecht, while a goal by Delano Burgzorg earned Heracles Almelo a 1-0 win over RKC.

The most spectacular goal of the weekend was in Arnhem, where Mats Seuntjens scored direct from a corner to put Fortuna Sittard 1-0 ahead in the second minute. Nikolai Baden Frederiksen earned the hosts a point with a header three minutes after half-time.