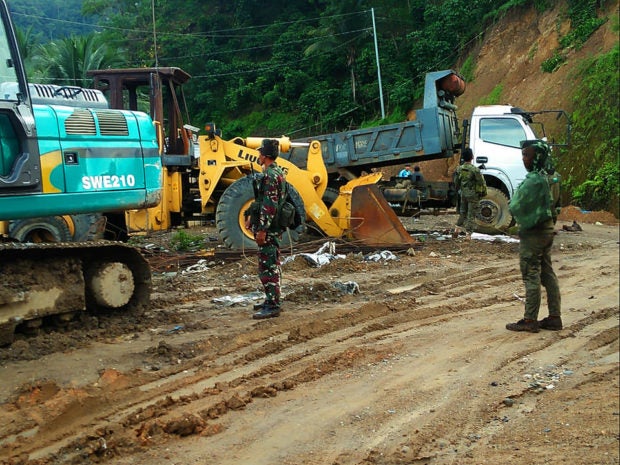 About 30 New People’s Army (NPA) guerrillas showed up at 2 p.m. Friday at a government road concreting project in Barangay Kinalaan of Kalamansig town and told civilian workers to back off for they would set ablaze the heavy equipment, said Lt. Col. Allen Van Estrera, commander of the 37th Infantry Battalion.

Soldiers who were tasked to secure the project quickly responded and traded shots with the rebels.

The firefight lasted for about 40 minutes and the rebels fled with their wounded companions.

“Our troops, although outnumbered, foiled the attack and safely secured the construction equipment,” Estrera said.

He said that government troops found traces of blood in the escape route of the rebels, indicating they could have suffered some fatalities.

Military officials said the rebels are also disrupting the completion of the road project as it will provide easy access for government service providers to the geographically isolated communities in the town where they are also building their guerrilla base.

Ex-Director of Valencia on the transfer of Ronaldo: in 2006, the club agreed with his agent and sponsors, but the deal did not take place
Klopp, Lampard, Rodgers and Wilder claim the award for the best coach of the Premier League, Pep-no
The authors of Showsport choose the winner of the Champions League: Chernyavsky - for Leipzig, Muiznek believes in real 🤪
Trent, rashford, martial and Greenwood are up for the award for the best young player of the season
Ronaldo started the 2016-17 season poorly – and then scored 10 goals in the Champions League play-offs and produced the best performance in the history of the tournament
Henderson, de Bruyne, Pope and Ings is among the contenders for the award for the best player of the Premier League season
The Bundesliga plans to start the season on September 18 with a match between Bayern – Schalke or two Borussia
Source https://newsinfo.inquirer.net/1301929/army-foils-npa-attack-on-govt-project-in-sultan-kudarat

400 Filipinos expected to be flown out of Lebanon next week

These Dainty Phone Cases Will Level Up Your Mirror Selfies

Pagasa: LPA may intensify into tropical depression in coming days

Russia’s race for virus vaccine raises concerns in the West

Sam Milby believes Catriona Gray is ‘The One’

Lakers not exactly rolling along as playoffs approach

Chance to face Tyson ‘too incredible’ to resist, says Jones

‘Love Life with Kris’ might not preem on schedule

Kevin Durant picks Clippers to win it all in NBA restart

FIRST LOOK: These Color-Changing Face Masks Are So Badass

3 Wyoming sightseeing balloons crash, as many as 20 injured

10 of the Funniest Names Suggested for Pasig's COVID-19 Lab

Number of Pinoys killed in Beirut blasts rises to 4

WADA to reduce bans for recreational drugs from 2021

4 accessories that will help you bike to work

Children in regular contact with nature could suffer from eco-anxiety, study finds

Abstract art can change our vision of time and space, new study finds

Leclerc hits back at racism accusations for not taking a knee

29 Isabela villages on lockdown due to COVID-19

COVID-19 tests of dialysis patients in Marikina to be prioritized