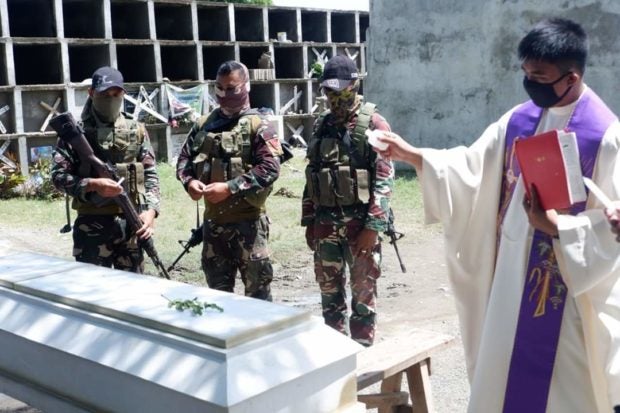 FINAL RESPECTS. Soldiers carry the coffin containing an unidentified communist guerrilla during his burial in Sindangan, Zamboanga del Norte on July 2. (Photos from the 97th Infantry Battalion of the Philippine Army.)

PAGADIAN CITY, Zamboanga del Sur, Philippines — After days of waiting for relatives to claim the body of a suspected New People’s Army (NPA) guerrilla who was killed in a battle with government troops, the military has decided to give it a decent burial.

Col. Manaros Boransing, commander of the Army’s 97th Infantry Battalion, said relatives who would want to claim the body could coordinate with the Sindangan municipal government in Zamboanga del Norte.

The body was buried on Thursday, July 2, at the public cemetery of Sindangan town.

The body was discovered by government troops in Barangay Piwan of Midsalip town in Zamboanga del Sur after a 25-minute gunfight with some 30 NPA rebels on June 28. He was slumped with his M14 rifle. 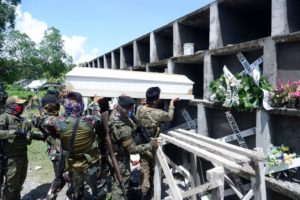 Also recovered from the clash site were four anti-personnel mines, one hand grenade, one rifle grenade, some magazines, and ammunition.

The body was brought to nearby Bayog and Midsalip so the locals could help identify him, but no one in those towns knew him.

This prompted the military to bring it to Sindangan town and ask its Municipal Task Force to End Local Communist Armed Conflict (MTF-ELCAC) to facilitate the identification of the body.

“The provincial and municipal task forces … are working to identify the cadaver so that we can inform the family about his death,” Boransing said.

He thanked the Sindangan government for giving the dead man a decent burial.

Manchester United presented their away form for the 2020/21 season
Ferdinand on Barca breeding: Bad. They still rely on old-timers
Inter wants Perisic back, even if Conte remains in the team. Bayern hopes to buy the player for less than 20 million euros
Rudi Garcia on Lyon's chances against city: the quarter-Finals showed that the favourites can also be beaten
CSKA agreed a 5-year contract with Fuchs. The transfer is estimated at 7-10 million euros
Ferdinand on Messi at Barca: Will he want to stay, given the results and the team's performance? Does he have time to wait?
I would not be surprised if Pochettino is appointed in less than 3 days. Ex-Barca winger Carrasco on the club's new coach
Source https://newsinfo.inquirer.net/1301917/army-troops-bury-suspected-npa-guerrilla-killed-in-battle

The latest on Dev Patel, J Balvin and ‘Diana’

Bald eagle attacks drone, sends it to bottom of lake

J Balvin says he is recovering from coronavirus

Maria Ressa P.A. Before As Per Jay Sonza, Rappler CEO Reacts To This

Spanish GP: Hamilton fastest ahead of Bottas in 2nd practice

Volunteers rescue pets, search for lost ones in Beirut blast

Tiger confirms he will play in US PGA playoff opener

Holed up in Thailand, Zamboanga awaits return to Circle

New Olongapo City patients may have contracted COVID-19 in workplace

Raptors’ Kyle Lowry got his title, now set to chase another

Raven Villanueva – Where Is The Former Sexy Actress Now?

Clippers top Thunder in OT as stars rest for playoffs

10 Pretty Mirrors That Will Level Up Your Mirror Selfies

Magic say Mo Bamba out for year; center had COVID-19 in June

Trump orders Chinese owner of TikTok to sell US assets

South Korea fears COVID-19 infections getting out of control