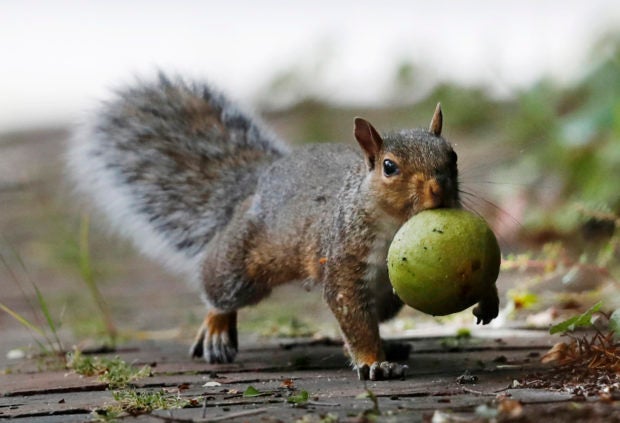 In this Tuesday, Sept. 11, 2018, photo a squirrel carries a walnut in Portland, Maine. A bumper crop of acorns, pine cones and other staples last year led to a population boom of squirrels. AP

There’s a bumper crop of squirrels in New England, and the frenetic critters are frustrating farmers by chomping their way through apple orchards, pumpkin patches and corn fields.

The varmints are fattening themselves for winter while destroying the crops with bite marks.

Robert Randall, who has a 60-acre orchard in Standish, Maine, said he’s never seen anything like it.

Evidence of the squirrel population explosion is plain to see along New England’s highways, where the critters are becoming roadkill.

Last year, there was a bumper crop of acorns and other food that contributed to a larger-than-normal squirrel population this summer across the region, said Rob Calvert, wildlife biologist from the New Hampshire Fish and Game Department.

This summer, there’s not as much food, so the squirrels are looking for nutrition wherever they can find it, including farms, Calvert said.

New England is home to both red and gray squirrels. Known for their bushy tails, the rodents are a common sight in city parks and backyards, and people enjoy watching their frenetic movements.

They eat everything from beechnuts and acorns to berries and seeds.

“It is crazy. You see squirrel tails everywhere,” said Greg Sweetser, who has a boutique apple orchard in Cumberland Center, Maine. In the past, he said, squirrels have sometimes nibbled on apples that had fallen to the ground. But this season they’re skittering into the trees, scurrying to and fro, and making their mark.

Oftentimes, the squirrels will take a single bite, then move on.

But a single bite is all it takes to ruin fruit.

In Vermont, where the harvest is just beginning in earnest, farmers are keeping a watchful eye because rodent damage has been a growing problem for its apple producers, said Eric Boire, the president of the Vermont Tree Fruit Growers Association.

The good news for farmers is that boom years for both acorns and squirrels are uncommon. Thus, it’s likely that populations will return to normal soon.

The fact that squirrels are hustling to find food, and getting run over in prodigious numbers on highways, suggests the culling already has begun, Calvert said.

As hungry as the squirrels are, it’s unlikely that they’ll inflict massive economic damage.

“Every year in farming, there’s something that we’re dealing with,” said Margie Hansel, an owner of Hansel’s orchard in North Yarmouth, Maine. “It is what it is. It’s part of farming. You expect to have something like this happen every once in a while.” /cbb

Messi wants to finish his career at Barca. Bartomeu believes that Leo will not leave in a year
Gasperini about Atalanta: we Want to reach the Champions League and break the club's record for points in Serie A
Hames can leave Real Madrid for the Premier League for 25 million euros. A year ago, Atletico and Napoli offered 45-50 million euros for him. Real Madrid Midfielder Hames Rodriguez is likely to change clubs at the end of the season
Gattuso on Napoli: We must develop a winning mentality
Avangard congratulated Zenit with the title: it's Time to match and take the Gagarin Cup
Coach of Orenburg Pro 0:1 with Rubin: Morally devastated, could have drawn
Kike Setien: Griezmann played a great match, understood Messi well, scored a great goal. We changed something
Source https://newsinfo.inquirer.net/1033156/squirrels-driving-farmers-nuts-in-us-state

Duterte Emotional Over Death Of Soldiers In Sulu Killing

PNP, AFP to create board of inquiry to improve operational procedures

Hundreds of scientists say coronavirus is airborne, ask WHO to revise recommendations – NYT

Sharon Cuneta ends feud with Ronald Carballo: ‘I forgive you’

75 persons nabbed for burning of houses in South Cotabato town

Meralco to refund consumers who paid their installment plan in full

When coronavirus robs you of your sense of smell

Who Invented The Telephone? Answer To This Question

Guide to EIGASAI 2020: The Japanese Films to Stream This Year

[OPINION] Is Duterte now a dictator?