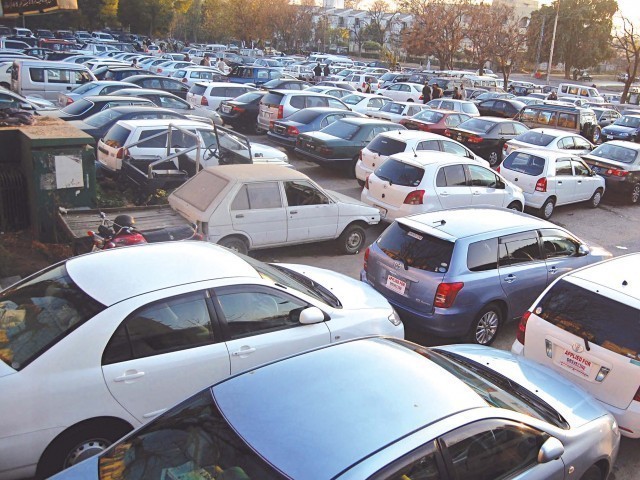 RAHIM YAR KHAN: The municipal corporation in Rahim Yar Khan seems to have succumbed to the tactics of the parking mafia in major city areas. Illegal parking lots have sprung up in different areas across the city.

Officials told Express News that private contractors are ripping people off by misbehaving, threatening to tow vehicles and tampering with slips. They charge up to Rs10 for a motorcycle and Rs20 for a car, officials added.

A visit to different parts of the city by Express News showed that illegal parking stands can be seen outside private hospitals, shopping centres and markets.

A number of collectors charge car and motorcycle owners in order to let them park on the streets outside the aforementioned spots. The collectors hand out receipts to drivers; majority of these receipts do not bear a district administration label.

One of the parking collectors outside a busy market told Express News on condition of anonymity that they are deployed in different places by their contractors, who have made arrangements with the traffic police and other officials.

Police held some fee collectors on different occasions for illegally charging the parking fee, but their contractors had them released, he added.

The main purpose behind hiring contractors is to ensure that the vehicles are parked correctly so that traffic jams can be avoided. But contractors are only interested in making money. They even allow vehicles to be parked on roads which hinders the flow of traffic.

Citizens have demanded the deputy commissioner take notice of the matter in order to curb this practice. Meanwhile, local government officials told Express News that there is no free space and land available in the city to serve as parking spot. They added the local government representatives have limited resources and powers and are helpless in this matter.

Is it a chicken after all?

How marvels of marketing count

China on the front foot

Acing the Red Dragon through Media

Rethinking Neoliberalism against the backdrop of COVID-19

Abuse of power in uniform

Coronavirus kills another 75, infects at least 2,751 in a day

Govt to withdraw Kharqamar case ahead of talks with PTM

Govt prepares SOPs to contain resurgence of Covid-19 on Eid