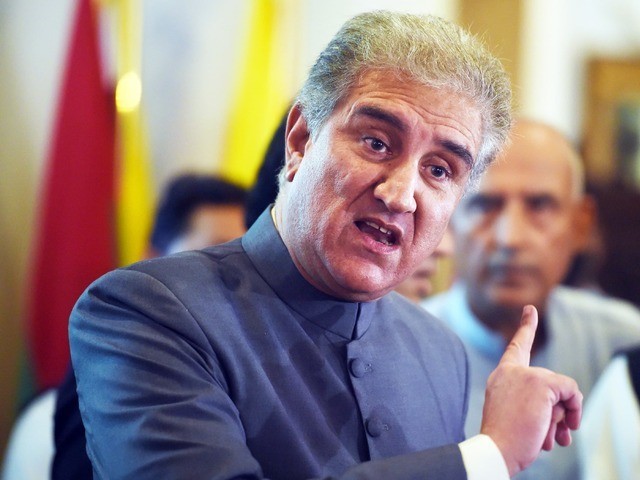 “Pakistan has not agreed to consider Afghanistan-India trade through our land,” the Foreign Office said while quoting Minister Shah Mehmood Qureshi.

The rejection came after US Ambassador to Afghanistan John Bass has said that Pakistan is considering resumption of India-Afghanistan trade via its territory.

Pakistan had already approached Afghanistan earlier this year and indicated its willingness to resume trade between Afghanistan and India through its land, Bass told The Economic Times in an interview on Saturday.

The revelation is significant given the fact that Pakistan has not allowed Indian goods to be transported through its territory into Afghanistan.

Bass also stated that the US did not believe that the conflict in Afghanistan would end with a military victory.

The US diplomat went on to add that a political settlement in Afghanistan “is in Pakistan’s long-term interest”.

“We have seen an increase in exports from Afghanistan to India [through air cargo]. It is obviously one part of the export strategy but it is an important part… and I think part of the reason why, in addition to the economic relationship between Afghanistan and Uzbekistan, a couple of months ago for the first time the Pakistani government expressed a willingness to start talking with its Afghan counterparts for parameters to enabling trade between India and Afghanistan through Pakistan,” he said.

The US ambassador also stated that Indian firms had been investing heavily in Afghanistan’s growth. Increased trade, connectivity through Central and South Asia through Afghanistan were all missed opportunities as a result of the prevalence of status quo, he added.

Bass also discussed the impact of US sanctions on Iran and the impact it would have on Chabahar port which was a subject of discussion when US Secretary of State Mike Pompeo and Defence Secretary James Mattis visited India last week.

Both Pompeo and Mattis were conveyed the importance of Chabahar as a means to expand bilateral trade and help improve Afghanistan’s connectivity with South Asia, he said.

“My government is still thinking through how Chabahar factors in the reimposition of the toughest sanctions that we believe need to be put in place to hold the Iranian government accountable for its action,” added the US diplomat.

30 killed in attacks in Mali

Burhan-like youth can give befitting response to Indian aggression

Amir pays tribute to his nephew

No threat to PTI govt, will complete five years: Fawad

Teacher arrested over rape of student in Sargodha

Only verified intelligence? A look at US presidents’ briefings

Confirmed coronavirus cases are rising in 40 of 50 US states

BLA-RAW-NDS nexus behind attack on PSX

Russians allow Putin to rule until 2036

‘Very little risk’ that pets can infect owners with COVID — WHO

Yet another train accident

The Russian Roulette in Afghanistan

A New outlook and emerging needs for education systems

Honor for family, women and nation

Alanis on her wrenching new album, 25 years of ‘Jagged Little Pill’ and more