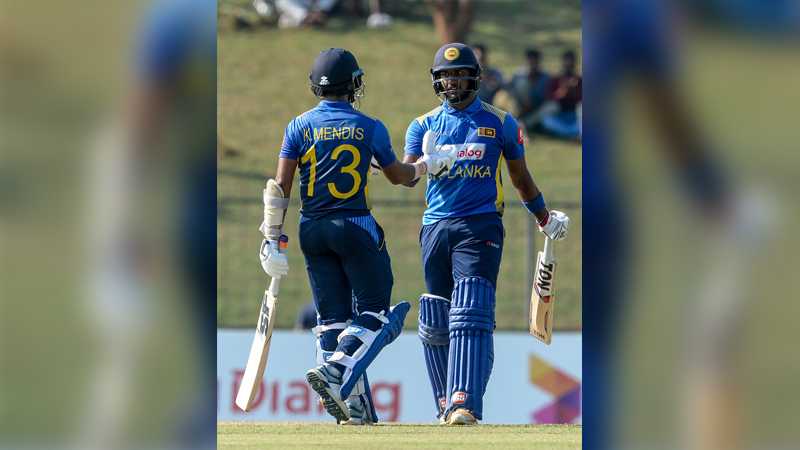 HAMBANTOTA: Sri Lanka comprehensively defeated West Indies by 161 runs in the second one-day international at MahindaRajapaksa International Stadium in Hambantota on Wednesday and sealed the three-match series 2-0 with one game to go.Chasing 345, the Kieron Pollard-led side started well as the opening pair of Shai Hope (51), and Sunil Ambris (17) added 64 runs for the first wicket before the latter got run out in the 13th over. Hope, who smashed a century in the series opener, completed his half-century, but couldn’t go further as he was dismissed by Angelo Matthews in the 18th over.Just two overs later, middle-order batsman, Darren Bravo was trapped by WaninduHasaranga’sgoogly, and was sent back for 16. Then the duo of Roston Chase (20) and Nicholas Pooran (31) did manage to add some runs and tried to build a partnership in order to get their team out of the trouble, but Lakshan Sandakan ripped apart the defense of Chase and the visitors were reduced to 130-4.

Chase’s dismissal opened the floodgates as West Indies lost their next two wickets for just seven runs, with skipper Pollard gone for a duck followed by Jason Holder for 3. Pooran, who was the highest scorer for tourists after Hope, couldn’t prevent his wicket for longer as he got out in the 36th over with 158 on the board.The next pair added 26 runs and took the score to 184 when Keemo Paul went back to the hut for 21. At the same score, West Indies lost their remaining two wickets and lost the match by 161 runs.Hasarnaga and Sandakan shared three wickets each, while NuwanPradeep claimed two and Matthews bagged one.

It was the biggest win for Sri Lanka in ODIs against West Indies.Earlier, Avishka Fernando and KusalMendis guided Sri Lanka to post a massive score of 345-8. Both the batsmen smashed centuries after early blows provided by the Windies bowlers. The pair took their team from 9-2 to 248, adding a dominating stand of 239 runs, before Alzarri Joseph broke the partnership and Mendis for 119.A few runs later, Fernando, too, lost the momentum and was sent back to the pavilion by Joseph for 127 in the 43rd over of Lanka’s innings. In the same over, Joseph dismissed experienced all-rounder Matthews for 1, and all of a sudden, the Islanders were 274-5.It looked like the Caribbeans will come into the match, but the lower-order of Lankans had some other plans. In the remaining seven overs, Sri Lanka managed to score 71 runs, thanks to some handy knocks of ThisaraPerera (36 from 25 balls), Dhananjaya de Silva ( 12 off 5 balls), Hasaranga (17 off 10 balls), and IsruUdana (17 off 9 balls).

‘Public places must be disinfected at the earliest’