Addressing the UNGA in his speech last week, Prime Minister Sogavare highlighted those experiences such as the onset of extreme temperatures, heat waves, flooding and drought has increased Pacific Island countries’ vulnerability to the negative impacts of climate change. 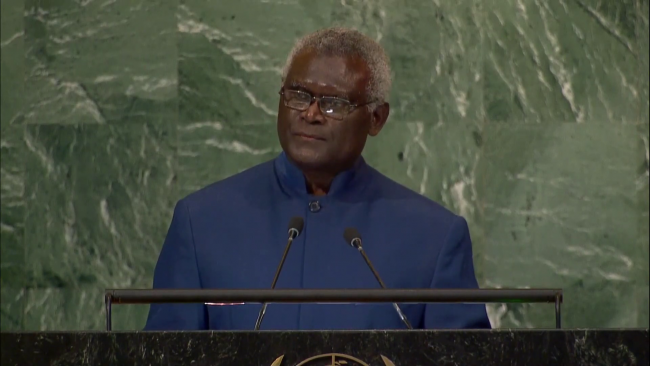 He informed the meeting that current indicators to address these islands’ vulnerability are inadequate.

“For pacific island countries like the Solomon Islands, vulnerability is a key hindrance to sustainable development. Currently, indicators to measure vulnerability are inadequate.

Solomon Islands therefore calls on all states and partners to support the development of the multidimensional vulnerability index (MVI) and looks forward to its finalization and adoption,” he said.

“Pacific Island countries including Solomon Islands are in a constant mode of recovery from disasters. Global financial mechanisms for disaster recovery need to be established to ensure the burden of recovery and building back better and stronger following rapid onset of disasters that are not born solely from countries that are in serious need of support.

Considering these challenges, the pacific region has declared a state of climate emergency. Sadly, we are seeing more resources spent on war than on combating climate change. This is extremely unfortunate.”

He further calls on the UNGA to support the pledging session for the Pacific Resilience Facility which will also be held during the meeting.

“Pacific countries have also established a Pacific Resilience Facility, a financing mechanism that aims to build resilience and reduce vulnerability of the pacific population to the negative impacts of climate change.

A pledging session for the facility will be held during this session and we call on all partners to support the facility.”

Sogavare also commended Vanuatu’s initiative requesting support from the UNGA to ask the international court of justice for an advisory opinion on climate change.

The Vanuatu Government last year, with support from a global alliance of civil society groups representing more than 1,500 civil society organizations in 130 countries launched a campaign which seeks an International Court of Justice Advisory Opinion on the issue of climate change and human rights.

This Vanuatu led initiative was a step forward in getting climate change to be considered by the World’s Highest Court.

The Pacific Islands Forum 2022 communique further shows support from Pacific Island countries towards the initiative, as Leaders commended Vanuatu on its initiative on a pathway to secure a request from the UN General Assembly (UNGA) for an advisory opinion from the International Court of Justice (ICJ) to clarify legal consequences of climate change, noting the urgency of the climate change threat and the need for accelerated global climate action and implementation of the Paris Agreement.

The communique further states that Leaders want the UN General Assembly to pass a resolution requesting the International Court of Justice to provide their opinion on the obligations of states under international law to protect the rights of present and future generations against the adverse impacts of climate change.

Prime Minister Sogavare then called on all parties going into COP27 to set more ambitious, national-determined contributions that would put the world on a 1.5-degree pathway.

“We would also like to see a roadmap for ease of access and timely disbursement of the year’s 100 billion Dollars adaptation finance by 2025.

The discussions on loss and damage demand a stand-alone agenda and COP 27 aims at establishing a loss and financing facility”, he said.