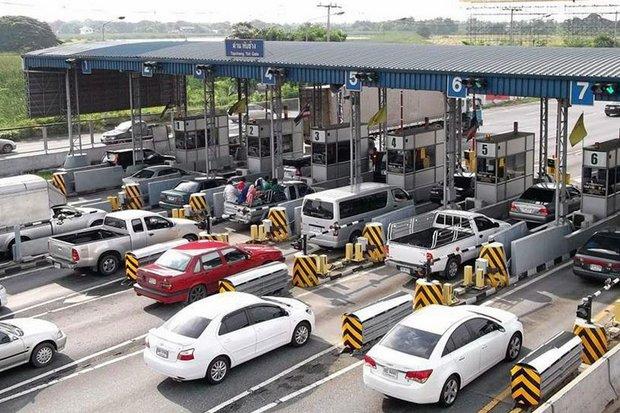 Vehicles line up to pay the toll for the Bangkok-Chon Buri Motorway. The Ministry of Transport has plans for an 18.5km elevated road to ease the congestion. (Screen cap ThaiPBS)

The Ministry of Transport should revise the design of the elevated six-lane road on the Bangkok-Chon Buri motorway to reduce costs, construction time, pollution and land expropriation, an academic at King Mongkut's Institute of Technology Ladkrabang (KMITL) says.

Associate Professor Supot Srinil, deputy rector of KMITL, said he accepted that the project needs to be built to reduce traffic congestion. Yet he said the government should conduct more studies "because there are flaws in the design blueprint" of the eastern inter-provincial motorway project.

The primary worry concerns pillars to be erected along this eastern inter-provincial motorway, which will cost 35 billion baht to build.

Under the current design, two elevated roads are planned -- for inbound and outbound lanes, separately. That would require the state developer to pay for more pillars, more land expropriation on roadsides and will need more time to build.

But the construction time can be shortened to 700 days instead of over 1,000 days and costs brought down to 20 billion baht if the blueprint is revised, said Assc Prof Supot, who is an expert in civil engineering and environmental management. 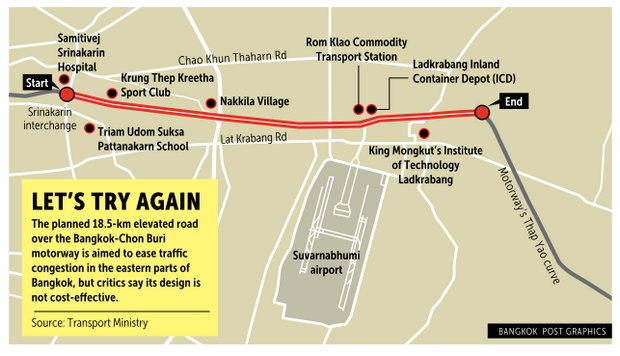 Assc Prof Supot said that building the elevated road in the median of the existing road would be more suitable as it would have only a single row of pillars in this space.

He said current technology allows engineers to do this, citing the elevated Bhuraphawithi Expressway which is built above the median traffic strip along a 55-km section of Bang Na-Trat road.

The single pillars not only enable the government to speed up construction by 36% and save the budget by 37% in this project, but they also require less space, during and after construction, Mr Supot said.

This will help the government avoid being dragged into environmental problems and land expropriation issues.

Assc Prof Supot cautioned that under the current plan, the contractor needs to place pillars on both roadsides.

As a result, officials need to claim some adjacent areas for the construction.

He said the pillar design would affect property values along both sides of the road. ''The project should not cause an impact on roadside areas," he said.

The government needs to look into the future in which the land can serve as new business, university and community areas, he said.

In terms of the environment, the two-pillar design will make the elevated road stand closer to existing communities.

Old car engines can emit ultra-fine dust particles, known as particulate matter (PM) 2.5, into the air and pose a health risk because its size of less than 2.5 micrometres, which is smaller than the width of a human hair, can easily lodge into lungs.

Noise pollution is also a matter of concern, he added. According to the blueprint of the project, soundproof walls will be added only near educational and religious compounds. "These may not be enough to deal with the unpleasant noise."

The Transport Ministry already held public hearings on the project and is looking forward to the construction.

Officials expect the new elevated motorway will serve up to 150,000 cars a day.

Officials are planning to build the new 18.5-kilometre road from Srinakarin interchange to Thap Yao in Bangkok's Lat Krabang district as an alternate and "faster" route for drivers.

Mr Supot raised concern that the 35-billion baht project might not be able to relieve traffic congestion as expected.

This is the best Milan in years: superkambekom with Juve (3 goals in 5 minutes!) saved the intrigue in Serie A
Zlatan Ibrahimovic: I am the President, player and coach! If I had been in Milan since the start of the season, we would have taken the scudetto
Sarri on the defeat by Milan: we played first-class football for 60 minutes. Then-turbidity
Pioli on the victory over Juve: Milan became a team. We can play even better
Pioli beat Juventus for the first time as a coach
Vardy has scored 10 goals for Arsenal in Premier League matches. Only Rooney has more
Ronaldo scores or gives an assist in 17 consecutive Serie A matches, where he scored 25 (21+4) points
Source https://www.bangkokpost.com/news/general/1541222/call-for-revamp-of-new-motorway-blueprint

Somkid warns of economic storm ahead

Progressive Movement hits back at allegations of donation mismanagement

One drowned, another still missing off Surat Thani

One drowns, one missing while collecting shellfish in South