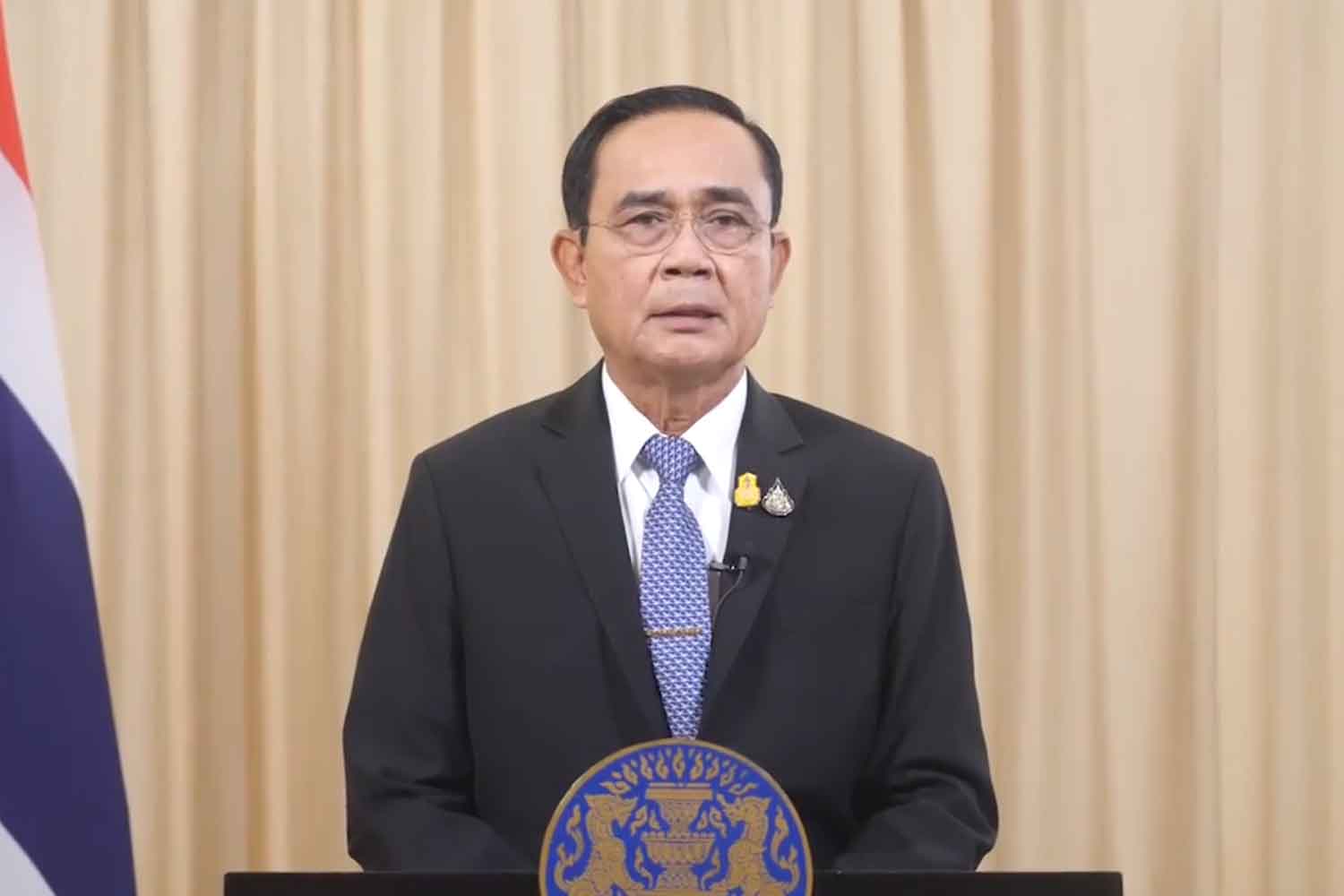 Prime Minister Prayut Chan-o-cha announces the government will on Friday sign a contract for the purchase of a Covid-19 vaccine that can be produced locally. (Screenshot from his video)

A forward contract to acquire a Covid-19 vaccine that can be produced locally will be signed on Friday, marking the next step forward in the battle against the virus, Prime Minister Prayut Chan-o-cha said on Thursday.

The prime minister gave the details in a video posted on the government's Facebook page on the eve of the contract signing between the National Vaccine Institute and vaccine developer AstraZeneca Plc.

The contract is for the purchase of 26 million doses, enough for 13 million people.

Gen Prayut said the world was suffering a worst-case scenario, with the Covid-19 pandemic claiming a large daily death toll, the World Health Organisation warning of a possible third wave, and lockdowns in many European countries.

Cooperation from all parties and the management of resources by his government had  prevented an uncontrollable Covid-19 situation that would otherwise have overloaded the national health system and impacted on the treatment of people with other illnesses, Gen Prayut said.

"We are preparing for the next phase in managing the Covid crisis, so that it does not do even greater damage to our country's economy and to people's livelihoods.

"The long-term solution to overcoming the crisis of the Covid pandemic is the availability of a vaccine and its adequate distribution to people," he said.

There were 3-4 groups of vaccine producers likely to succeed and big countries were trying to reserve vaccines. "Thailand, too, must be able to get sufficient doses of a successful vaccine early," Gen Prayut said.

"That is why, a few months ago, I made the decision for Thailand to seek to partner in vaccine production with an eminent vaccine research group as a way of securing a vaccine early."

The government's efforts bore fruit last month when it signed a contract with the University of Oxford and AstraZeneca to produce a vaccine in Thailand and to receive the production technology.

"And tomorrow [Friday], we will sign a further agreement for the purchase of the vaccine," he said.

The prime minister said that the vaccine the two organisations were developing showed a very good efficacy rate of 70-90%.

Gen Prayut said the vaccine would be relatively cheap and suitable for Thailand. It could be stored at 2-8°C, which allowed for convenient nationwide distribution.

Vaccines from other producers must be stored at between -20°C and -70°C , and this would mean transport difficulties.

"We expect this vaccine to be properly certified, approved for use and in production by the middle of next year. The sooner we can advance this timetable, the sooner we can open our doors to large numbers of visitors and begin the task of rebuilding our economy," the prime minister said.

Lautaro on the contract with Inter: The agent and the club are working on it. I feel good in Milan
Messi worked in Barcelona's general group on the eve of the Spanish Super Cup final with Athletic
Pablo Sabaleta: Man City are capable of reaching the final of the Champions League, but the opponents there do not forgive mistakes
Filipe Luis: Simeone is not so good at communicating with players, but sometimes goes over pride
Ronaldo: Ronaldo is not the same as in Real Madrid. Now he knows how to control himself. Staying in the shadows for the entire match, he can harm the opponent in a minute
Soslan Gatagov is among the commentators of the Liverpool - Manchester United match on Okko. Track with Stognienko-separately
Ronald Koeman: Messi will decide whether to play with Athletic or not. With Leo Barcelona stronger, we lack his creativity
Source https://www.bangkokpost.com/thailand/general/2025963/covid-19-vaccine-purchase-contract-to-be-signed-friday

Seven arrested as activists and police face off