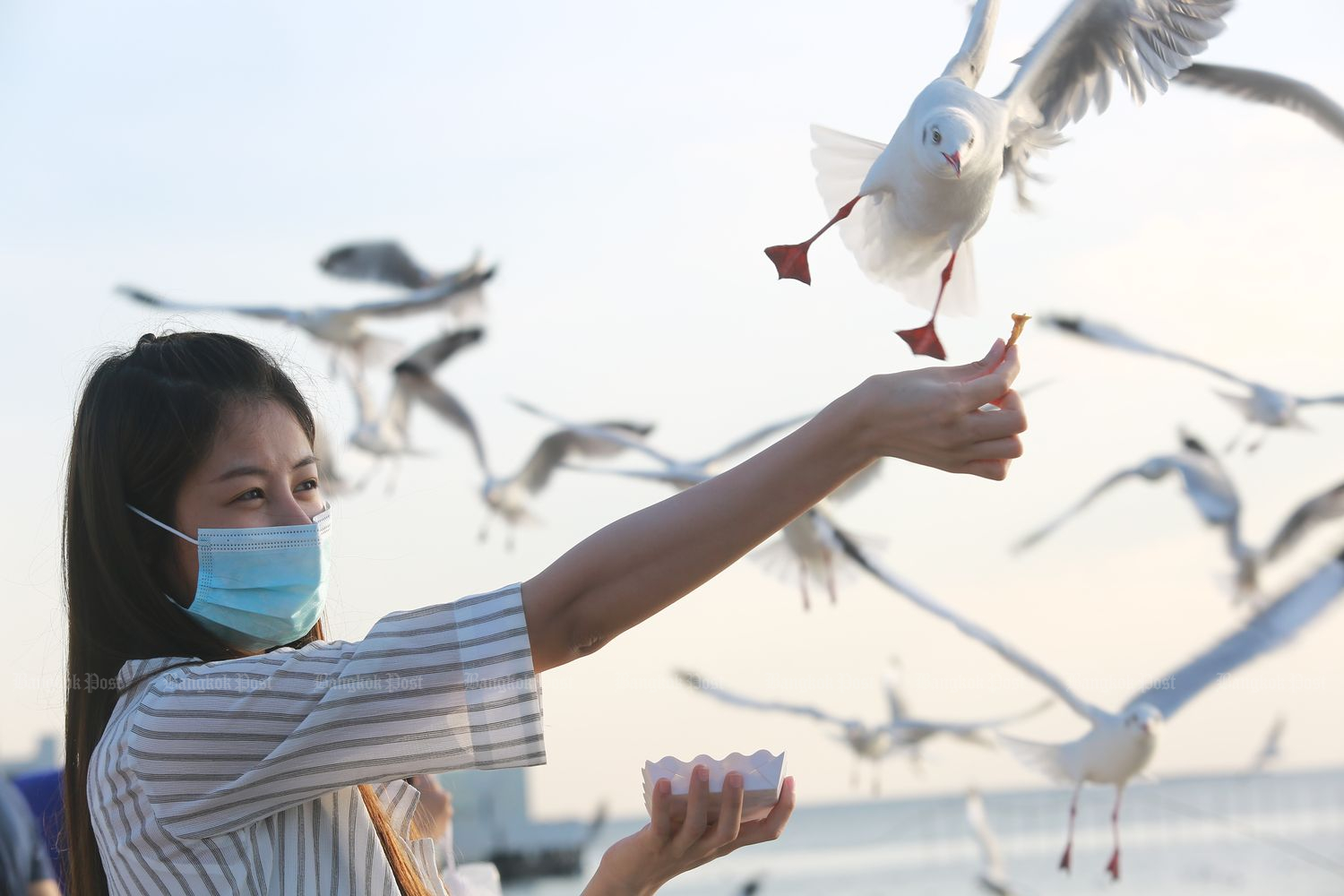 A Thai woman feeds a flock of seagulls at Bang Pu in Samut Prakan province on Nov 6. Local people have been the main tourism driver since the Covid0-19 pandemic, with zero foreign tourists recorded in April to September this year. (Photo by Somchai Poomlard)

A total of 1,201 foreign tourists were reported in October after a ban in April aimed at averting coronavirus outbreaks, as the country gradually opens up to a select number of visitors to help its struggling, tourism-reliant economy.

The economy contracted 6.4% in the third quarter from a year earlier after the second quarter's 12.1% slump as most virus restrictions were eased, but an absence of tourists is limiting the recovery.

The 1,201 foreign visitors in October is a fraction of the 3.07 million arrivals in the same month last year.

Tourism ministry data showed the latest visitors included 471 from China, 231 from neighbouring Cambodia, 178 from Middle East countries and 116 from Europe. All of them travelled on special 90-day visas that require two-week quarantine.

The entry restrictions have helped keep its coronavirus case tally less than 4,000.

It plans to restart talks with China on a travel bubble to boost an economy the government predicts will shrink by 6% this year.

But the country has yet to agree any such arrangements and previous plans were abandoned in August after coronavirus cases in Asia increased.

New outbreaks have seen several other travel bubbles between Asia-Pacific countries aborted or fail to take off, including between New Zealand and Australia, and Hong Kong and Singapore.

In January-October, the number of foreign tourists in Thailand dropped 79.5% to 6.69 million. There were zero tourists recorded in April-September.

It predicts only 5 million foreign visitors in 2021.

Neymar: Thank God for the charisma. I have a gift to be different from the rest
Wayne Rooney: It's time to lead the younger generation. I had a great career
Lineker on Rooney: One of our greatest players. England would have won Euro 2004 had he not been injured
Chelsea will give Drinkwater the third rent - Kasimpasa. He has not played since February
Neymar: I became an icon and idol in football. Courage is my main advantage
Ole Gunnar Solskjaer: Liverpool want to beat everyone. Manchester United knows that they can beat anyone
Messi missed today's Barca training session
Source https://www.bangkokpost.com/travel/2025927/first-trickle-of-tourists-in-october-as-curbs-ease

B15 fare for Gold Line from Saturday

Global deaths near 2m as WHO battles new strains

40 arrested in a suspected gambling house in Nonthaburi

Kanchanaburi governor orders all hotels in the province to close immediately