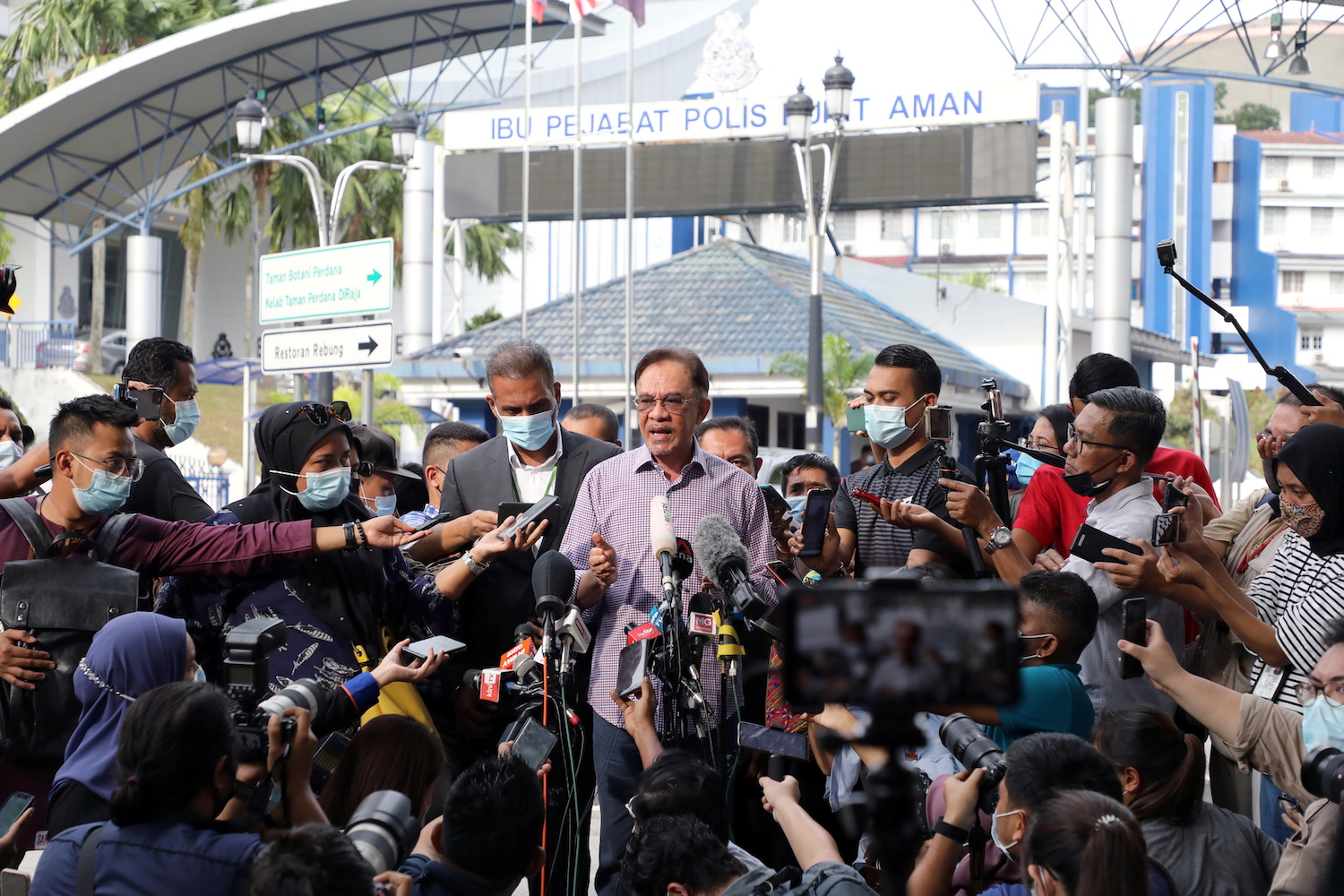 Malaysian opposition leader Anwar Ibrahim speaks to reporters after being questioned by police about a list of 121 federal lawmakers who reportedly back his bid to take over the premiership from Muhyiddin Yassin,, in Kuala Lumpur on Oct 16. (Reuters Photo)

KUALA LUMPUR: Malaysia’s king will consult with other hereditary rulers, possibly as early as Sunday, to discuss proposals by Prime Minister Muhyiddin Yassin, who has reportedly asked the king to declare a state of emergency.

Muhyiddin met with King Al-Sultan Abdullah on Friday to present the emergency proposal that includes a suspension of parliament, sources told Reuters. Opposition leader Anwar Ibrahim denounced the move as an attempt by the premier to cling to power amid a power struggle.

The proposal comes as Malaysia sees a resurgence in coronavirus cases and as Muhyiddin faces a leadership challenge from Anwar, who last month said he had majority support in parliament to oust the premier.

In a statement on Saturday, the palace did not identify the recommendations made by Muhyiddin, and said the king would soon hold the consultation with other Malay rulers.

“Al-Sultan Abdullah greatly understands the need for the country’s administration to continue to tackle the threat of Covid-19,” the palace said in a statement. The Council of Rulers, which groups the heads of Malaysia’s nine royal houses, has the power to withhold consent from any law and deliberate on questions of national policy.

A source familiar with the matter said the rulers would meet at 2.30pm on Sunday, after which the king will deliver a decision to the prime minister, The Star newspaper reported.

Muhyiddin’s office has not commented on the emergency proposal.

The government is scheduled to propose its 2021 budget on Nov 6, and there have been questions over whether it can muster a majority in parliament for that.

The government agreed at a special cabinet meeting Friday that declaring a state of emergency would halt any attempts to politically destabilise the government, allowing it to focus on containing the outbreak, The Star reported.

Parliament wouldn’t sit during an emergency and laws would be enacted through ordinance by the king, the newspaper said, citing people it did not identify.

A condition for the measure is that curfews and martial law would not be imposed, and economic activity could proceed as normal, the report added.

Muhyiddin in March emerged as the country’s leader, heading an unwieldy bloc with a majority of only a few lawmakers that has led to constant speculation about the government’s possible collapse. Anwar said on Oct 13 that he had the backing of more than 120 of Malaysia’s 222 MPs, and urged the prime minister to resign.

Malaysia has recorder 24,500 cases of Covid-19 and registered a record 871 new cases last Sunday and 710 on Friday. Authorities have ordered around 1 million people to work from home in a bid to tighten movement controls in Kuala Lumpur and several states. The country has reported 214 deaths in total.

Тот Tottenham midfielder Winks scored from 49 yards. This is the 3rd result in the Europa League, all - in this draw
This miss will hurt all men: Molde player missed from half a meter and drove into the bar
Mikel Arteta: I am Very happy with Pepe's game against Molde. Arsenal played well overall
Napoli players came out in t-shirts with Maradona's name and number 10 for the Europa League match
Daniele Bonera: Milan is happy with the game with Lille and only regrets the result
Neymar on Maradona: You will always remain in our memory. Football is grateful to you
If football was a movie, Diego would be its main character. Showsport readers say goodbye to Maradona
Source https://www.bangkokpost.com/world/2007575/malaysian-pm-proposes-emergency-rule