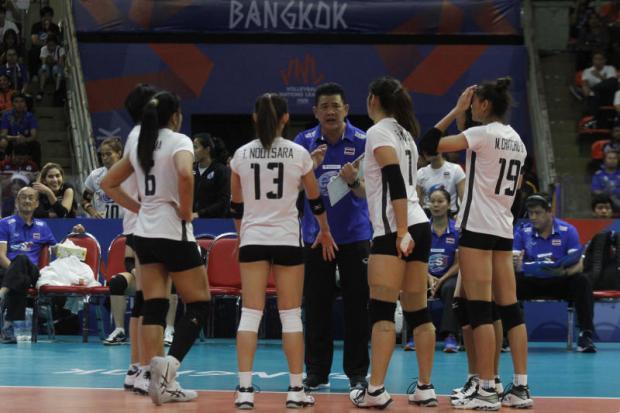 Thailand coach Danai Sriwacharamaytakul, centre, talks to his players during the match against Germany in Bangkok last week. (Photo by Pornprom Satrabhaya)

Thailand hope to bounce back from a disappointing third week as they take on Asian rivals South Korea in the inaugural FIVB Nations League at Chatchai Hall in Nakhon Ratchasima on Tuesday.

Japan play Turkey in the first Pool 15 game in the fourth week of action at the same venue.

Coach Danai Sriwacharamaytakul will have a huge task on his hands as he tries to rally his troops, who lost all three matches against the Dominican Republic, Germany and the United States in Bangkok last week.

They will face a Korean team determined to rebound as well following three straight defeats in Apeldoor, the Netherlands, last week.

"The team always play well in Korat [Nakhon Ratchasima]," said Danai, who, along with the players, paid their respects to Thao Suranaree at her statue in the northeastern province on Sunday.

"Maybe it's because we always pay our respects to 'Ya Mo' [Thao Suranaree] whenever we're here and that lifts everybody's spirit.

"Hopefully the fans will come out to give us support. We will try to do our best in all three matches and make the fans happy."

Thailand are 14th in the 16-team standings with just six points from two wins and seven losses.

South Korea are ninth on 11 points, from four wins and five losses, Japan are 10th with the same number of points and win-loss record but have inferior points ratio. Turkey are the highest-ranked team at No.5 in Pool 15 after six wins and three losses.

The top-five teams from the league rounds will join hosts China in the final round in Nanjing.

Andujar Oliver on deletions: Fati went too far in the foot, and the foul on the Peak was even more dangerous, perhaps
Atalanta extended the winning streak to 11 matches, beating Sampdoria-2:0
Milner played his 536th game in the Premier League and was ranked in the top 5 of the League in games played
Barca midfielder Fati is removed in the Derby with Espanyol. He spent 5 minutes on the field
Suarez scored 195 goals for Barcelona and finished third in the club's top scorer list
Daniele de Rossi: People call Messi cowardly, but they are afraid to ask their wives for a remote control from the TV
Daniele de Rossi: Ronaldo is comparable to Messi in goals and trophies, but Leo's game is more fun
Source https://www.bangkokpost.com/news/sports/1479121/thai-volleyball-team-hope-for-turnaround-in-fortunes

Narongpan tipped to be next army chief

MCOT 'not insolvent' as cash shrinks