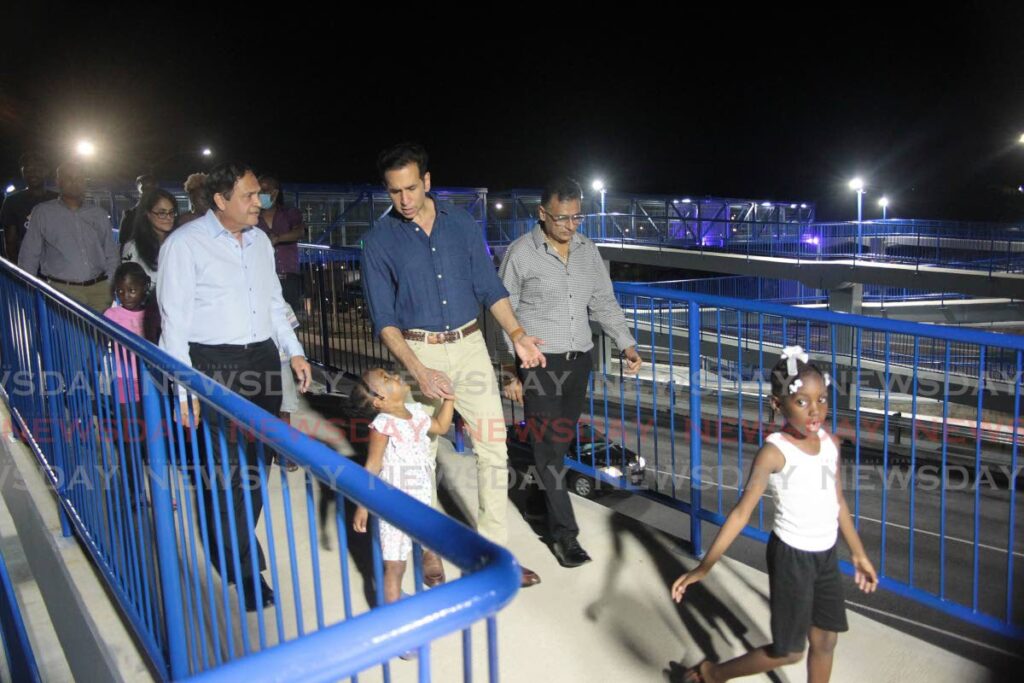 Minister of Works and Transport Rohan Sinanan, Chairman of the Coosal group of companies Sieunarine Persad Coosal, San Fernando West MP Faris Al Rawi and children of the Embaccadre use the the Rienzi Kirton Highway Overpass. Photo by Lincoln Holder

RURAL Development and Local Government Minister Faris Al-Rawi has said no date has been set for the next local government elections.

He spoke at the opening of the Rienzi-Kirton Overpass in San Fernando on Wednesday.

In response to a question from one reporter about the budget debate being over, Al-Rawi said, " Budget over? The budget (debate) has just begun."

He reminded the media that after Finance Minister Colm Imbert presented the 2022./2023 budget on Monday, the budget debate begins in the House on Friday from 1.30 pm, with Opposition Leader Kamla Persad-Bissessar's response to it.

By established parliamentary convention, Persad-Bissessar will have the same speaking time as Imbert did on Monday. His presentation lasted four hours.

Al-Rawi said, "The budget (process in Parliament) is one month in length."

While hinting at the possibility of weekend House sittings to facilitate the budget debate, Al-Rawi said those particulars are matters for Leader of Government Business Camille Robinson-Regis and Opposition Whip David Lee to work out.

"As to dates for elections, there is a Constitution where there is someone called the Prime Minister of the republic of Trinidad and Tobago. You will have to ask him about dates."

Al-Rawi previously said the life of local government bodies ends in December and the law allows for a period up to next March in which the elections can be called. The 14 local government corporations in Trinidad are evenly divided between the PNM and UNC.

He dismissed any notion of infrastructure being prioritised on the basis of politics.

Ali-Rawi said the newly formed Secondary Road Repair and Improvement Company, which falls under his ministry, has $200 million to undertake work under its remit. He added that $250 million was allocated to the Works and Transport Ministry's PURE programme for roadworks.

"So there is a significant pool of money, and remember we're coming off of the back of covid with a $13-14 billion deficit. So we could not attend to roads, secondary roads, in the manner that we wanted to, before now."

Al-Rawi reiterated, "Road repair is a priority for the Government."

Works and Transport Minister Rohan Sinanan said he does not decide which road works take precedence.

"There is a system at the ministry were we actually use data to tell us which of the roads should be prioritised."

Sinanan recalled that over 300 infrastructural projects were done by the ministry in fiscal 2022.

"Yes, we would have gotten some licks for the condition of the roads, and based on the allocation that we got, we were able to do over 300 road projects."

For fiscal 2023, Sinanan said the ministry will use its data to determine which roads are in need of repair and use its budgetary allocation to address them accordingly.

Al-Rawi also said the ranks of the municipal police force will be increased from 771 to 1,500 officers this year.

Asked about safety features at the overpass and preventing people from crossing the highway without using the overpass, Al-Rawi said municipal police will collaborate with residents to ensure this does not happen.