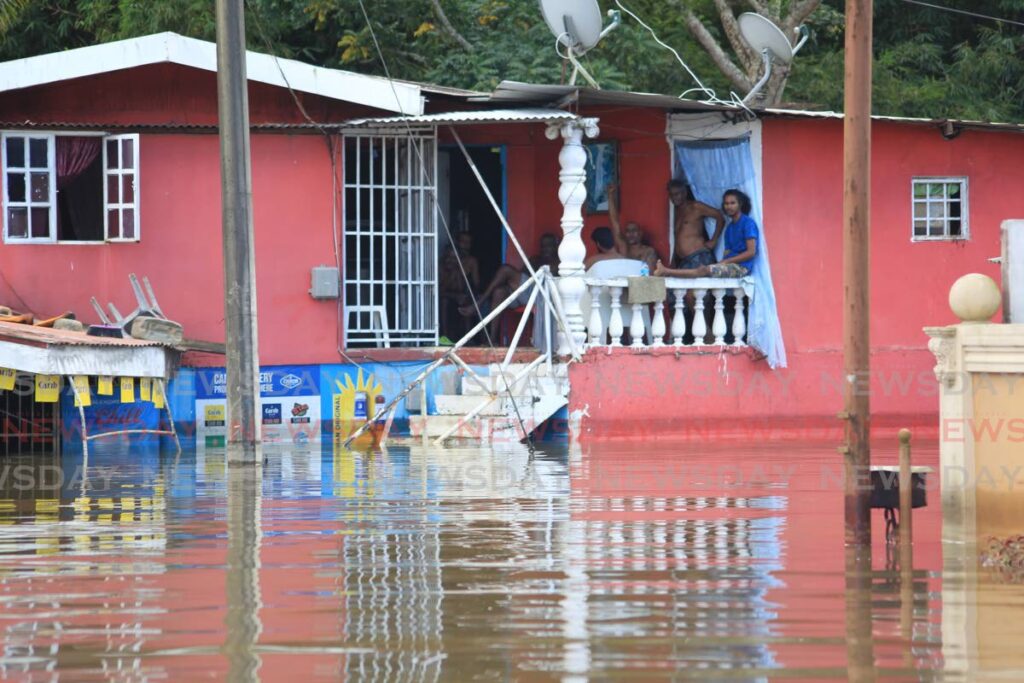 For the fifth day in a row, residents of Bamboo No 2, Valsayn South are unable to access their homes except by boat on Wednesday. Photo by Roger Jacob

For four nights and three days, residents of Bamboo No 2 have been underwater. Koi fish make their homes in the flooded streets. Four-wheel-drive vans take the chance to drive through, but their mufflers become covered. And a resident has apologised on behalf of his community for the tongue lashing given to the ministers who visited on Tuesday.

Zahid Mohammed said, "We're having a rough time. We're waiting on the pumps the ministers promised, but apparently, it's stalled on the way. We appreciated that they came. But the promises weren't fulfilled." 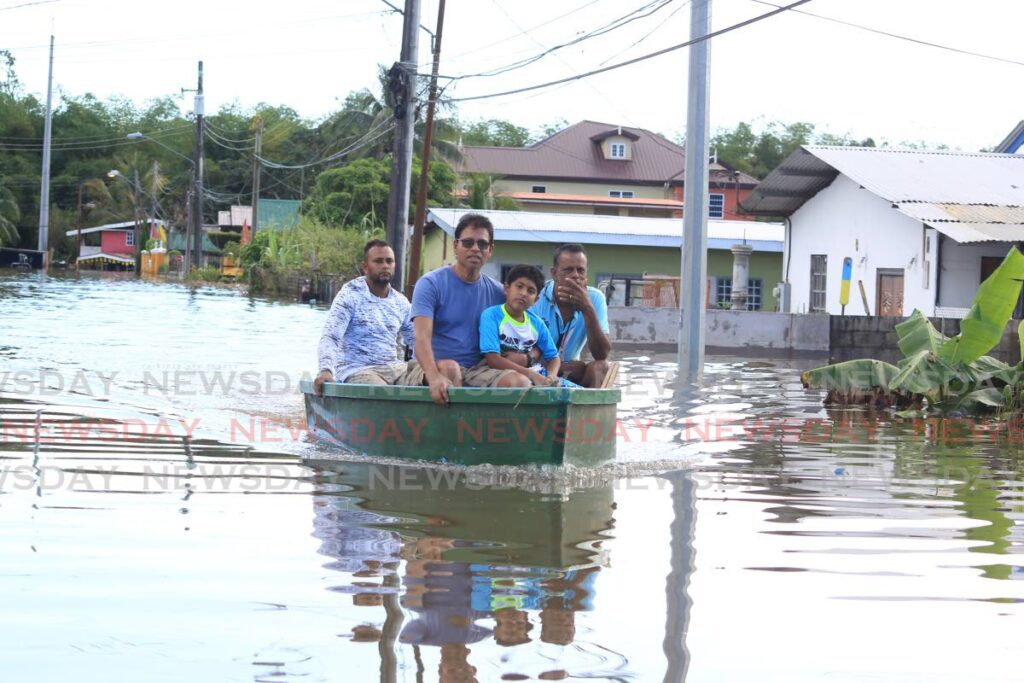 In what has become a regular sight, a boat is used to transport residents through floodwaters on Nabbie Street, Bamboo No 2, Valsayn South on Wednesday. Photo by Roger Jacob

Asked how he felt about the treatment of the ministers on Tuesday, "They were not run out. They just had some hard talking with some of the villagers who were frustrated and are still frustrated."

A man who identified himself as Mohanlal Beharry from Mohan Street said, "We could apologise on behalf of those persons because we do need some assistance."

Mohammed echoed Beharry, "We really need the assistance because we house under water. I live on Jaffar Street and my house under two to three feet of water."

Beharry said his house was under 12 feet of water as it was closer to the Caroni riverbank. He said a neighbour's house on Rattan Street was under nine feet of water.

Beharry said he lost many kois, goldfish and African cichlids to the floods but hoped he would be able to find them again. 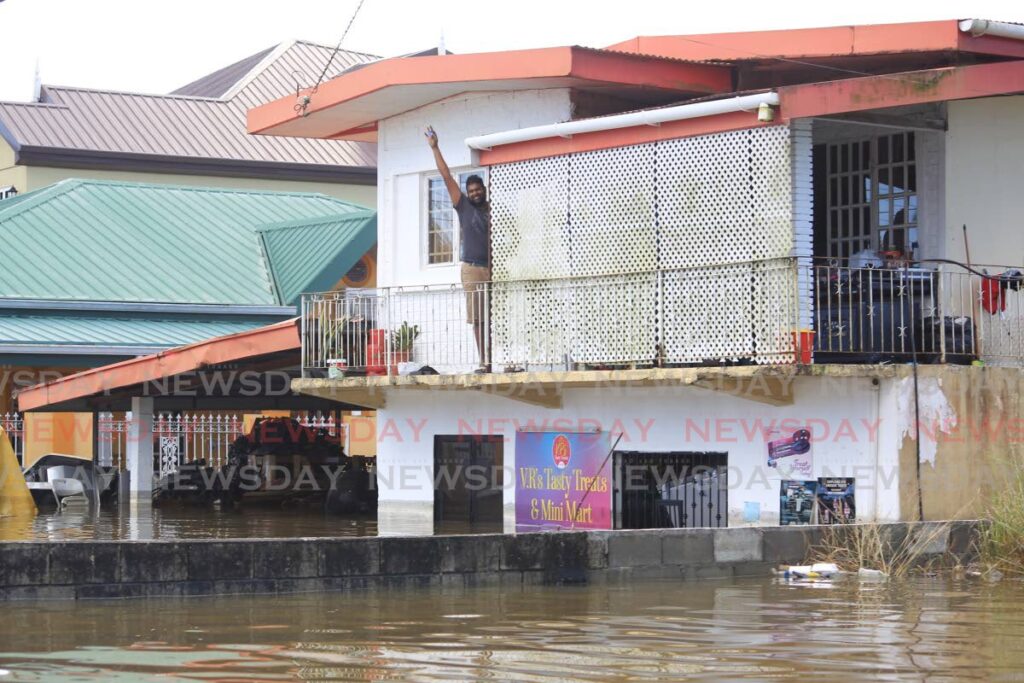 A resident of Nabbie Street, Bamboo No 2, Valsayn South, keeps his spirits up as he waves to Newsday from his flooded home on Wednesday. Photo by Roger Jacob

Another resident, Anthony Sookdeo lost his two turtles and hoped they were alive.

Mohammed said, "We organised tractors with pump and they're gonna help us pump out some of the water."

While driving on Nabbie Street in a resident's van, Newsday saw T&TEC workers using an amphibious vehicle to disconnect power lines that could become hazardous given the high level of floodwater.

One man who was sitting in the van commented.

"You know the vehicle from Dumb and Dumber? That's it. They buy it and paint it yellow."

Residents believed the water would begin to subside by Friday. One man recalled that the run-off took five days, when the area flooded in 2018.

Dolsy Rattan, who said her house on the corner of Rattan Street never flooded before, said water levels had already started to fall, as palms in her yard and the culvert, which were below water on Tuesday, became visible on Wednesday.

Rattan's neighbour helped her lift her stove and fridge off the floor of her home but when he returned to check them, he did not believe they would be salvageable.

Rattan said she lost her husband five months ago and could not explain how she was coping.

"My washing machine in the back floating, that's to tell you how high the water was."

Rattan's sister-in-law and neighbour, Doolin Rattan has remained on the second floor of her flooded home. Neighbours bring food that is pulled up to her with rope. She has lived there for 70 years, she said, and this week was the second time she ever got flooded out, the first was in 2018. 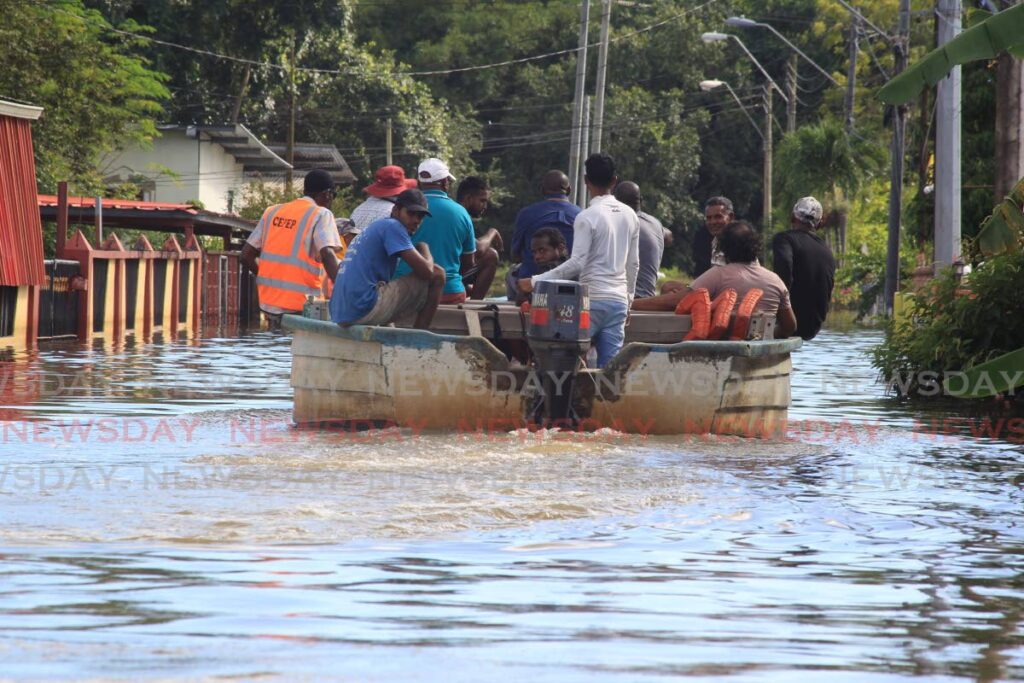 Nanan Boat Tours uses one of its boats to transport government officials through floodwaters as they provide relief to residents on Nabbie Street, Bamboo No 2, Valsayn South on Wednesday. Photo by Roger Jacob

One resident, Ian, on Paray Lane said he heard there were five pumps but only one was working. He hopes the government can help residents out.

He said, "It bad out here. It going and take three to four days for the water to go down, and the water done turning black. It turning dark brown and by tomorrow, it going and turn more black."

Pressed to elaborate, Ian said, "Over here is cesspit, it's not sewer. Well, cesspit and all kind of thing mixing in the water, so the water staying so long it bringing up all the nastiness. It's not no running water, it's stagnant and everything gonna settle there now. That's where sickness does come from."