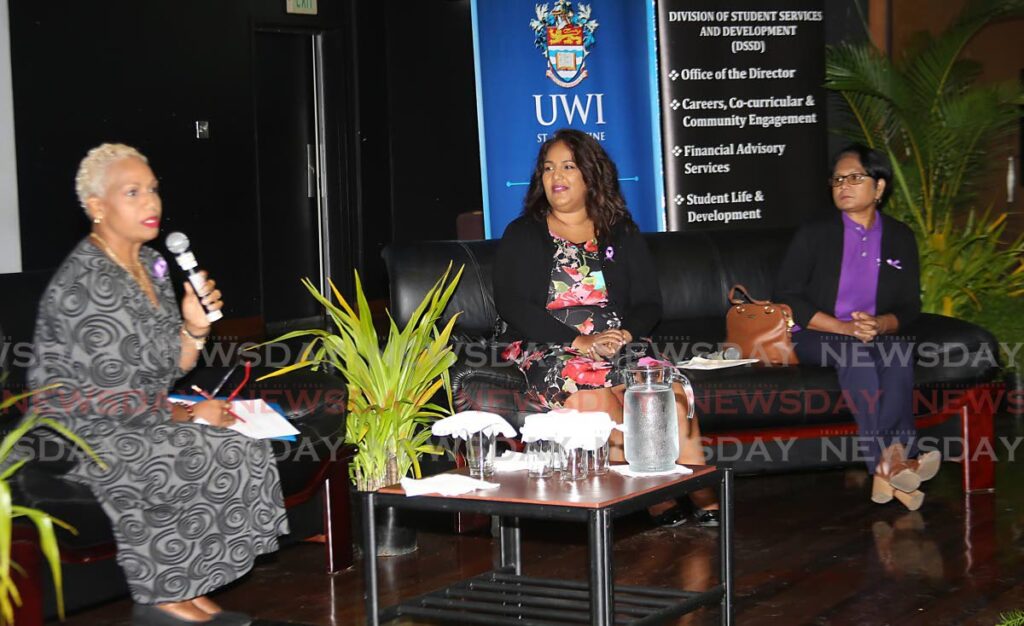 From left, moderator Dr Karene De Caires, panellists Dr Katija Khan and Sabrina Mowlah Baksh at UWI's Deconstructing Domestic Violence Panel discussion on Friday, which was celebrated as the International Day for the Elimination of Violence Against Women. The discussion was held at UWI's St Augustine Campus. - Photo by Sureash Cholai

Should gender-based violence (GBV) be treated as a public health concern? This was the main subject of debate during the University of West Indies’ (UWI) Deconstructing Domestic Violence Panel discussion on Friday, which was celebrated as the International Day for the Elimination of Violence Against Women.

The discussions took place against the background of statistics provided by UWI’s Division of Student Services and development manager Kathy-Ann Lewis, who said the United Nations Women’s Organisation estimates that globally, 736 million women, almost one in three, have been subjected to physical and sexual intimate partner violence, non-partner sexual violence, or both, at least once in their lives.

“In 2020, the police service and the domestic violence (DV) hotline reported 556 DV cases, with approximately 80 per cent of the reports being against women and girls. The police's Victim and Witness Support Unit said that, between 2008 to 2015, there were 7,000 reported cases of DV, 875 per year.

Speaking at a joint select committee meeting in 2022, addressing the state’s capacity to provide support for DV, the chairman of the JSC reported that between March 2020 and March 2022, there were 6,250 or 3,125 per year, roughly seven reports of DV per day.”

Three of the four panellists agreed that treating GBV as a public health issue meant that more people would realise that the issue involved them, rather than thinking that it was someone else’s problem.

Khan said the response to GBV depended on people’s perception of its severity as well as the barriers to action.

“When do we drop the red flag? Is it the first time he insults me, or gets me to do something I don’t want to do? Psychological abuse is the most prevalent type in abusive relationships. If I were to talk about it, what are the perceived benefits to speaking up? Will I be shamed if people find? Where will I go if I leave? And then we want to layer that with age, gender, community, ethnicity, education, health knowledge.”

Barratt said she had been brought up on the adage that women should scream fire instead of rape so that someone would come and help, as people saw they were at risk with fire.

Sanatan said the change in thinking would mark a shift in paradigm from thinking of it as a national security issue to a health issue. He compared it to diabetes, which has different impacts at different levels.

“People always stop in their tracks when I ask how many (sick) days do you have to take if you’re being abused? GBV can be seen as a human resources issue, as a burden on the healthcare system, an issue that affects the economy, and then think about how it impacts children. A public health approach is critical to understanding how diffuse the problem is.”

Mowlah-Baksh disagreed and said GBV had to be looked at holistically in its political, social, financial, economic, and cultural contexts, including those of religion and gender. She questioned whether reframing the lens the issue is viewed through would solve the problem.

“If we are already fighting the authorities to treat GBV seriously, to fund the NGOs that are doing some of the work, to put more resources into the fight, how is putting it in another box going to help us to solve it? We already struggle to get survivors heard and get them the help they need. What we need are efficient systems that work the way they’re supposed to.”

Barratt said looking at GBV from a health perspective wouldn’t solve the problem totally but it would allow entry points for policy makers to give more resources and for different sectors to see how it affects them.

The issue of dating violence was also raised, as reports say that one in four women between the ages of 15 to 29 have been in an abusive relationship.

Sanatan said schools needed to take responsibility for making their environments GBV-free, including when students were on their way to school. He said at the secondary level there needed to be more guidance counsellors and more opportunities for students to report GBV without fear of repercussions.

Khan said schools are where students interact in developmentally appropriate ways. She said while they are learning about sex, authorities should be concerned about where they are learning from, and asked why policymakers and others were not interested in producing information for them to learn from.

Barratt said GBV was prevalent on university campuses. She said generally society needed to step away from taboos and talk about what could and did actually happen.

“People who look at pornography get a skewed perception of what sex is and how it can happen. We speak about sex as if it’s medical and don’t talk about the desires that go with it.”

Mowlah-Baksh said young people mainly dated on social media, and there were increased incidents of cyber-bullying and women being scammed. She said GBV intervention needed to start long before the secondary school level, as children were talking about having boyfriends and girlfriends at the kindergarten level, often encouraged by their parents and society in general.

The event was the first of the UWI’s events celebrating the UN’s 16 Days of Activism against Gender-based Violence, which runs from November 25 to December 10. It was followed by a candlelight procession.