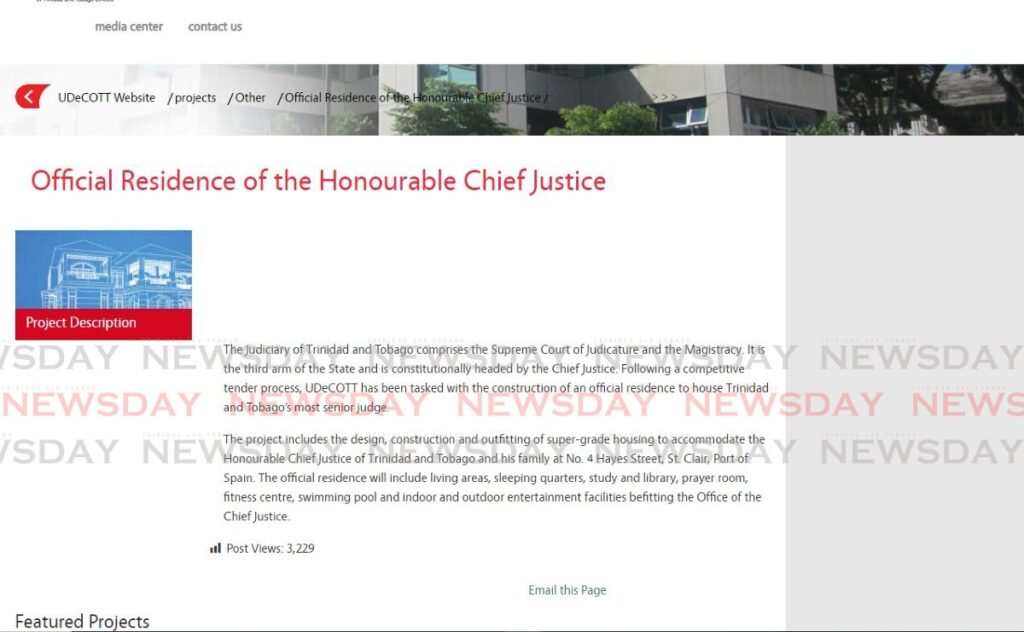 Udecott's description of the official residence for the Chief Justice as listed on its website up to October 3, 2022.

The official residence for the Chief Justice will only cost $4 million out of the $265.2 million set aside for the construction, refurbishment and renovation of public buildings and offices under the government’s Public Sector Investment Programme (PSIP) 2023.

It also may not be as opulent as described on the website of Udecott, the agency assigned to build the official residence for Trinidad and Tobago’s most senior judge.

Up to Monday, Udecott’s website gave a description of the project, which has been tagged “new.” The website says Udecott is “tasked to manage the project." which it said included the design, construction and outfitting of super-grade housing to accommodate the Chief Justice and his family at 4 Hayes Street, St Clair, Port of Spain.

The PSIP 2023 – under the heading Public Buildings – said, “The construction, refurbishment, renovation and equipping of public buildings and offices to provide improved accommodation for staff and clients accessing government services will continue to be executed in fiscal 2023 with an allocation of $265.2 million.”

In the list of projects for execution in fiscal 2023, the construction of the official residence is highlighted and the document advised, “conceptual designs were developed, the request for proposal document was completed as well as procurement for a design consultancy...completed. Works to be undertaken in fiscal 2023 include civil and foundation works and superstructure works.”

However, in a media release on Sunday, the Judiciary took issue with Newsday’s report of what the PSIP 2023 says and an editorial which discussed the construction of the CJ’s residence.

It accused the newspaper of “twisting and juxtaposing of information, speculation, and erroneous statements coupled with its headline and opening sentences appeared to be written to provoke negative comment from those who were unaware of the facts.”

It said there are three arms of the state – the legislature, the executive and the judiciary – and, the offices of the Chief Justice, Prime Minister and President, regardless of who they are, are constitutionally required “to be housed at fully maintained super grade housing which is secured.”

“The Prime Minister and President have now been so housed and the Chief Justice remains in rented premises at the sum of $54,000 per month.

“The residence that was provided previously to the Chief Justice was owned by the State and was located on Prada Street, St Clair.

“The Prada street residence was sold inexplicably by the government in December 1997, despite the protestations of the then Chief Justice.

“In July 2014, Cabinet decided that Udecott would be tasked with building the house at No 4 Hayes Street, St Clair. This location is on a far smaller piece of land than the original property at Prada Street occupied. The Judiciary rejected what Udecott proposed at the time because they considered it far too expensive.

“Since then, the Judiciary has prepared a conceptual design and is having final designs and plans done at present. These plans will be costed,” the release said.

It also added that “given that the Judiciary has not yet decided on the final design or cost, it is inconceivable that any information on any website or in any newspaper article can state what will be in the house,” although the description of the official residence is listed on Udecott’s website.

The Judiciary said its requirements for design for the Chief Justice’s official residence are: a simple minimalist design capable of being made “theirs” by successive occupiers; privacy for occupiers including from on compound security; provision for human security that does not intrude on family’s private living spaces; family quarters capable of separation from official entertainment and from guests; disabled friendly and secure; occupants may have children of any age and so the house must be capable of providing for different scenarios; indoor-outdoor living with privacy from roads, neighbours, passers-by, etc; hardy, easy to maintain materials and construction which enable longevity.”

Editor's note: Newsday's news report on this topic was based on accurate reporting of information contained in the PSIP and included a verbatim description on Udecott's website of the planned residence.

There is no indication on that website of any modification to the plan for the Chief Justice's residence. If the Judiciary has rejected that plan, then any incorrect information on Udecott's website should be updated.

Our report and our editorial were based entirely on the information publicly available until the Judiciary revealed the change of plans on October 2.

As the Judiciary confirms, the Chief Justice is currently accommodated in rented housing, presumably of satisfactory (super grade) quality. Former chief Justice Michael de la Bastide says in his memoir Within the Law that he recommended to the Salaries Review Commission in 1996 that rather than provide housing for judges, it made more economic sense to increase their housing allowances. In November 1997, he changed his mind, but the Prime Minister appeared not to agree with him.

Our editorial, which is the opinion of this newspaper, argued that given current economic circumstances in general and the financial position of the Judiciary in particular, the construction of an official residence in the form presented by Udecott should not proceed at present.