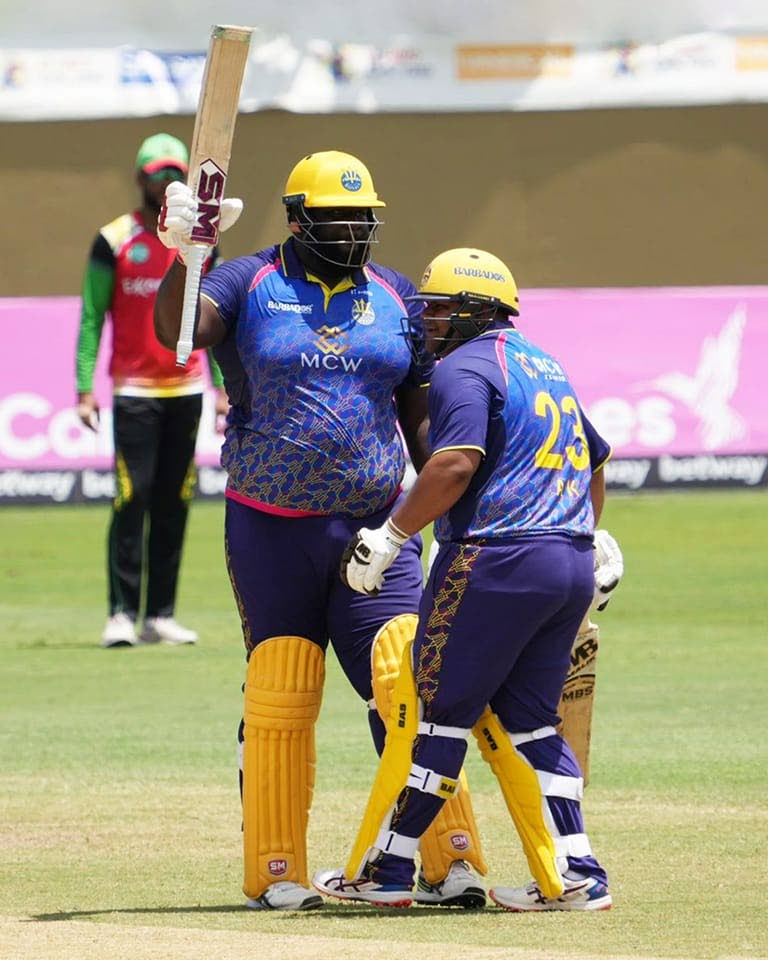 Rahkeem Cornwall (centre) of Barbados Royals raises his bat after reaching his half-century, while his teammate Azaam Khan congratulates him, during their team's Hero Caribbean Premier League qualifier against the Guyana Amazon Warriors, on Tuesday, at the Providence Stadium, Guyana. PHOTO COURTESY BARBADOS ROYALS. -

BARBADOS Royals all-rounder Rahkeem Cornwall has urged his team to make "one last push" as it seeks to win its third Hero Caribbean Premier League (CPL) title on Friday at the National Stadium, Providence, Guyana.

In contrast to Sunday's top-order collapse to the same opponents, in a preliminary contest, Barbados Royals got the perfect start from their openers, who put on 53 for the first wicket.

After a watchful start that saw Barbados six without loss after two overs, man-of-the-match Rahkeem Cornwall switched gears and clobbered 11 sixes for a top score of 91, his highest total of the CPL.

A partisan crowd was expecting a similar outcome to Sunday when Barbados lost their first three wickets for eight runs and never recovered. But Cornwall and Kyle Mayers (26) left them silent with some brutal hitting.

Guyana thought they had made inroads when left-arm spinner Junior Sinclair bowled out Myers and Imran Tahir trapped new batsman Harry Tector LBW for a duck, but Cornwall and Azam Khan had other ideas.

The pair put on 90 runs for the third wicket to take the game away from Guyana. Even the typically frugal Tahir was given some rough treatment with three sixes in one over – two from Cornwall and one from Khan.

By the time Shakib Al Hasan got rid of Cornwall, in the 17th over, the platform was set for a big total.

Poor bowling and fielding compounded a bad day for Guyana as Khan (52) continued the late onslaught. A 22-run over from Odean Smith in the 19th, which included a no ball, highlighted a poor overall display from the hosts as wicketkeeper Rahmunullah Gurbaz waved away his teammates to attempt a catch off a top edge from Khan, but he lost the ball in the sky and ended uptaking evasive action as the ball fell at his feet. Barbados closed on 195 for five.

Any hope of a successful chase was dashed early as Guyana's in-form Gurbaz was out bowled to Mayers in the first over. From there, it was a steady procession of batsmen back to the pavilion. Shai Hope (16), Al Hasan (1) and Chandrapaul Hemraj (10) all fell cheaply as Guyana were reduced to 32 for four.

Skipper Shimron Hetmyer tried his best to fight back with 37 off 29 balls but failed to find a reliable partner.

As wickets continued to tumble, the Guyana crowd began making their exit, still hopeful their team would not be following them out the tournament on Wednesday. Ramon Simmonds (3/17), Mujeeb Ur Rahman (2/21) and Cornwall (2/10) did the damage as Guyana were bowled out for 108.

Guyana will face the winner of Tuesday night's match between St Lucia Kings and Jamaica Tallawahs for a second crack at the final.

On the team's mindset going into Friday, Cornwall said, "It's just one last push. We have to give it our all – can't take anything for granted, just do the right things."

He said Sunday's loss to Guyana did not faze his teammates, who are quickly making up for the absences of former captain David Miller and batsman Quinton de Kock, who left after the Trinidad stage for international duty.

"We stick together as a team, we cheer up each other. Even though we have a bad game we don't show no one a bad face. The team is gelling well. Not much talk, we had a bad game and put it behind us. We know we're a good team."

Despite his impressive knock, Cornwall said the pitch was not conducive to strokeplay.

"I think it's a slow, low one, not good for cross-batted shot, but still thankful for the score that we get today."

The giant Antiguan said he backed his power and skills when the ball was in his hitting arc.

"I stick to my game plan. I know once the ball is in my area, I know I can put it away. Early on it was a bit slow, but I just give myself time to make it up in the end."