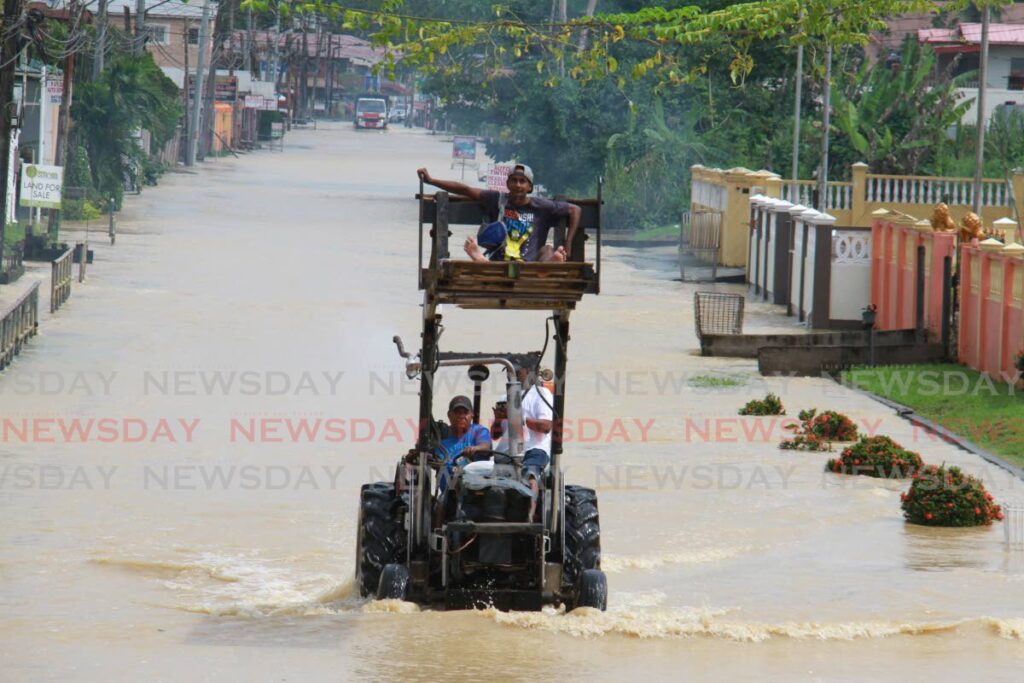 This man, who is up high on this heavy motor vehicle, was rescued along the Penal Rock Road on Tuesday. - Photo by Marvin Hamilton

Even though the rain had stopped and the sun was out on Tuesday, massive flooding left some Penal residents marooned.

At Goodman Branch Trace, the water rose about five feet, and they estimate that with no further rain, it could take three-four days for the water to subside. 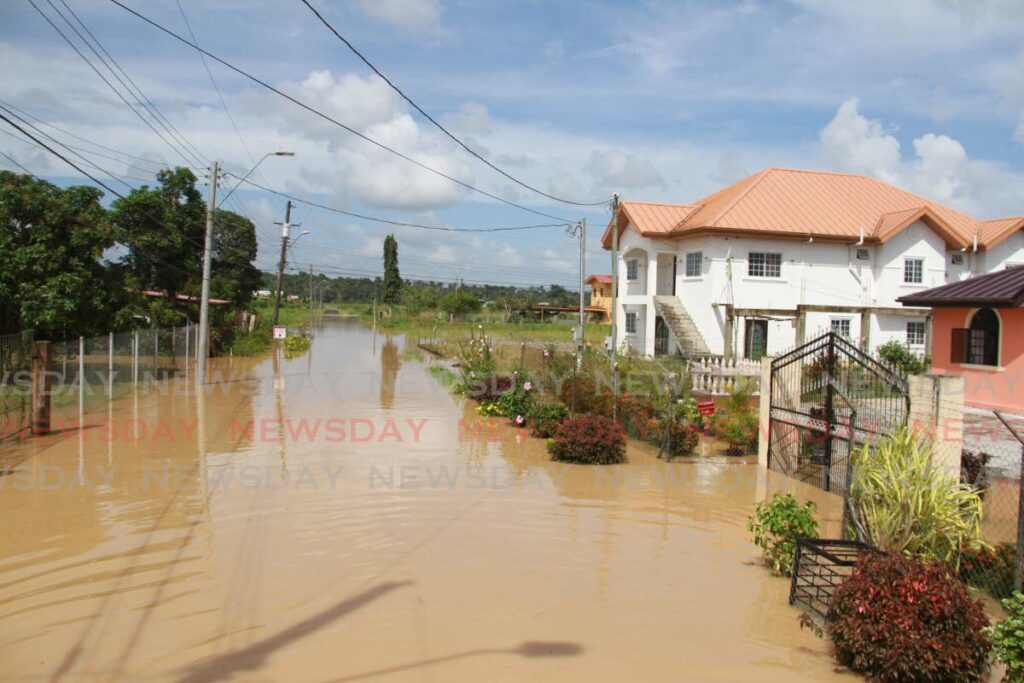 The water was so high that trucks could not get to the area. Members of the disaster management unit (DMU) of the Penal Debe Regional Corporation distributed food and meals to some affected people using a dinghy.

Truck driver Mahindra Goberdhan and his coworkers spent most of the day helping stranded people. On Monday night, the DMU distributed over 600 meals.

Deochan Ramnath, 55, who has diabetes, said the rising water surrounded his family's property where there are two houses. They had been stranded since Saturday.

"We cannot go anywhere. I was thinking about going through the water to go out the road to get some food.

"We appreciate this very much. You are the first set of people to come and offer help," he said as DMU worker Sumai Phillip gave him food and a case of bottled water. 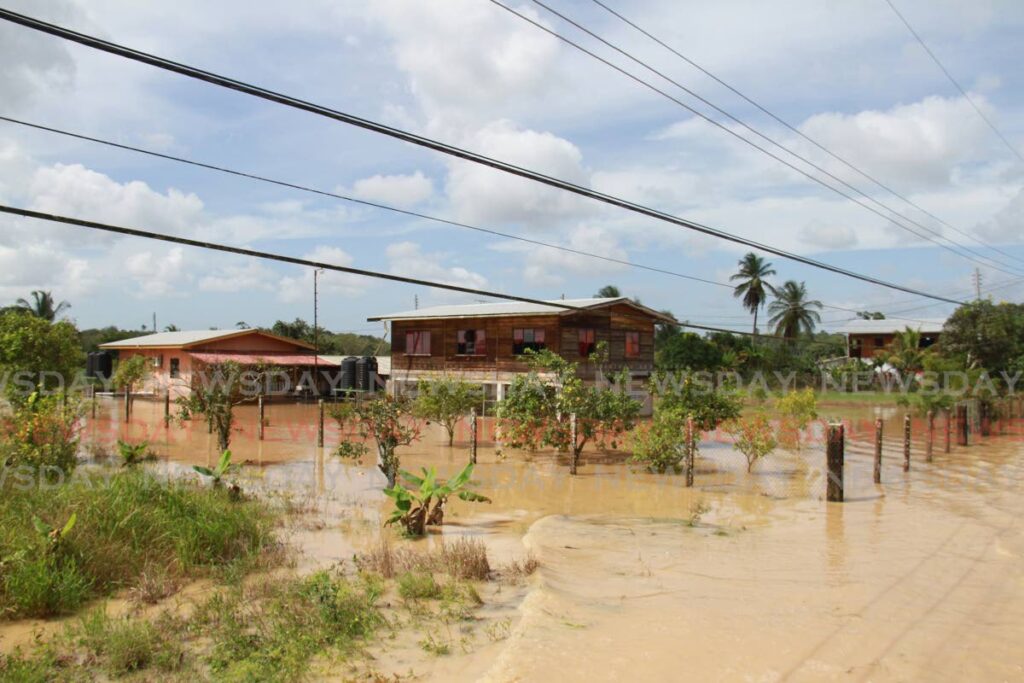 Another relative, Govin Ramgoolam, said, "We live in a low-lying area. This is the third major flood we have had in two months. Our neighbours parked their cars in our yard. No one can go out or come in."

Kumar Ramjattan said he and his 80-year-old mother had been stranded since Saturday. Ramjattan, a livestock farmer, said he is living off the land.

"I have some fig trees in the yard. I have cows, chickens, and goats."

The water was also high at Old Rochard Road, Moolchan Trace, Goodman Trace, and parts of Penal Rock Road. The Kubairsingh Penal Rock Hindu School was closed, and the road was impassable.

A GMR ambulance with two workers waited for about an hour, hoping the water would subside. They were heading for a patient further along the Penal Rock Road, and there were reports of flooding on alternative routes. 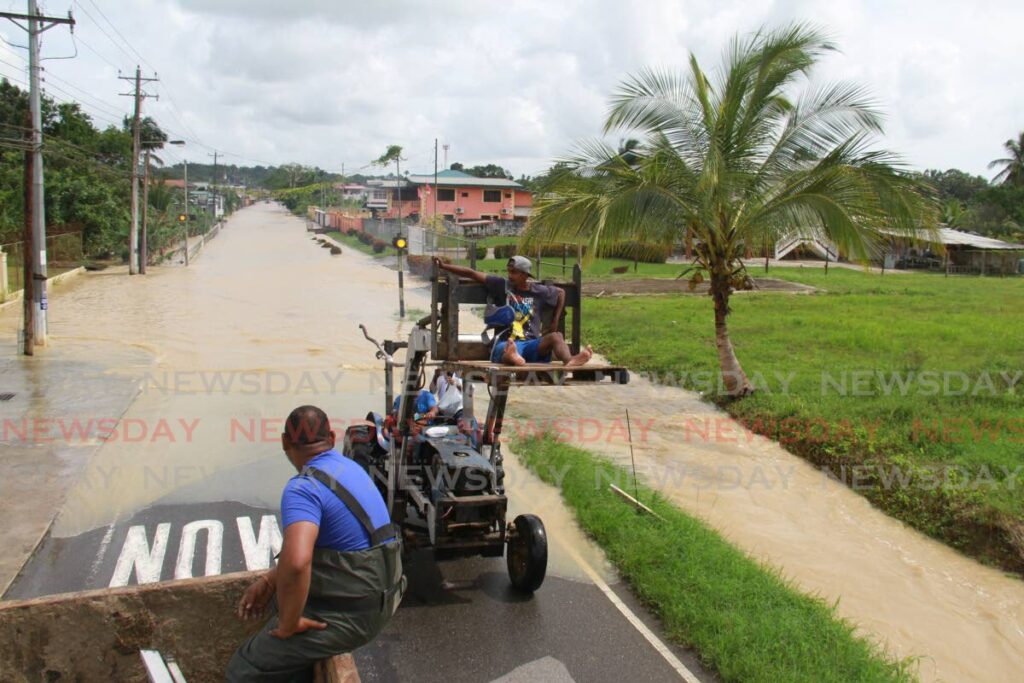 This man, who is up high on this heavy motor vehicle, was rescued along the Penal Rock Road on Tuesday. - Photo by Marvin Hamilton

The patient, who is said to be in his 50s, complained of coughing up blood and feeling unwell. After being told he had left using an alternative route, the ambulance went to meet him in the Debe area.

The orange-level adverse weather alert that the Met Office issued on Sunday was downgraded on Monday to yellow-level. On Tuesday, it was further downgraded to green, meaning the threat of adverse weather has substantially diminished.