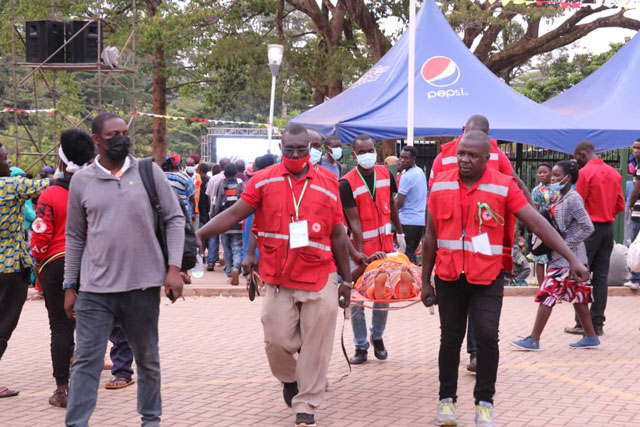 Health officials and police had a busy 24 hours at Namugongo.

Namugongo, Uganda | THE INDEPENDENT | Sixty-four suspects are in police custody for targeting pilgrims during the Martyrs’ Day celebrations. Luke Owoyesigyire, the Kampala Metropolitan deputy police spokesperson, says that the suspects were arrested both inside and outside the martyr’s shrines and are locked up at Kira division police station.

He says that 34 suspects were arrested as a result of 36 cases reported by pilgrims including one for issuing counterfeits. Uganda Radio Network (URN) has earlier reported the arrest of 30 thugs who disguised themselves as Boda boda riders to terrorize pilgrims on the roads leading to Namugongo shrines.

Apart from cases of stealing clothes, wallets, and luggage, Owoyesigyire explained that they had also recorded crimes related to phone theft, assault, and motor vehicle theft.

The number of suspects arrested this time is far less compared to the over 200 picked up during the previous events. This has been attributed to the few pilgrims who showed up this time and the majority came in during the last hour.

Previously, pilgrims would fill Namugongo to the brim by May 31. Caroline Kushemererwa, the Kampala Metropolitan head of the Police Child and Family unit, says that they registered at least 15 cases of children who lost contact with their parents due to the big number of pilgrims at the catholic martyrs’ shrines.

Osbert Sserugo, the manager Red Cross central division, said they had received 13 children disconnected from their parents. But seven children had been reunited with their parents while six others were yet to get their parents.