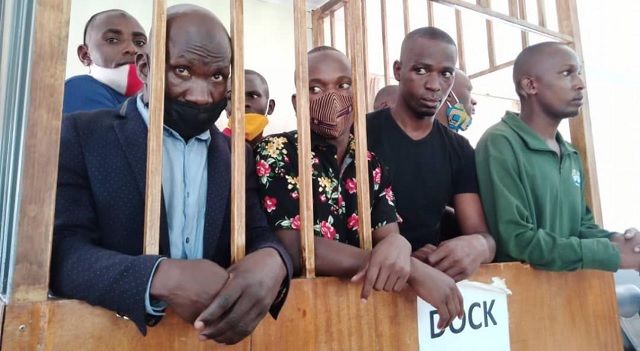 Some of the NUP Supporters facing trial in the General Court Martial in Makindye. URN photo

Kampala, Uganda | THE INDEPENDENT | The army prosecutor Lt Col Raphael Mugisha has asked the General Court Martial in Makindye to give him extra time to present more witnesses in the case in which 32 supporters of National Unity Platform are accused of being in unlawful possession of explosive devices.

Mugisha told the court presided over by Lt General Andrew Gutti on Monday that the witness he wanted to bring had been assigned other official duties and as such he was unable to make it.

He thus asked for an adjournment which was granted up to June 6th 2022.

The suspects who were represented by lawyers led by George Musisi, have also continued with their bail application and brought relatives to stand for them surety and on the next session, they will continue hearing the bail application by bringing more sureties.

The army prosecutors allege that the group and others still at large were found in illegal possession of 13 pieces of explosive devices which are ordinarily the monopoly of the defense forces.

According to the prosecutors, the crime was committed between November 2020 and May 2021 in areas of Jinja, Mbale, Kireka, Nakulabye, Kawempe, Natete and Kampala Central.

The accused persons were arrested by the Chieftaincy of Military Intelligence after the Uganda Police Force accused them of plotting to carry out petrol bomb attacks targeting government vehicles and buildings in various places in the country. This was towards the swearing in ceremony of President Yoweri Kaguta Museveni in May 2021, whom the state alleges that they were protesting his election and had planned to fail his oath taking.

Police claimed that the suspects masterminded attacks on Kasubi Royal Tombs, on former Jinja Resident City Commissioner Eric Sakwa in Nakulabye, on Uganda Registration Services Bureau and on Katwe police station among others.

But the suspects who are still on remand at Kitalya and Luzira prisons denied the charges and are applying for bail in shifts.

Meanwhile, one of the suspects Muhydin Kakooza who was convicted of contempt of court and last month attempted to jump from the dock to attack the court officials was yesterday brought in court with his both legs shackled with a chain.

Kakooza is both serving his eight months sentence for contempt of court and is also remanded at Luzira prison for the charges he is jointly charged with 31 others.