Two Ugandans detained in India over illegal possession of cocaine 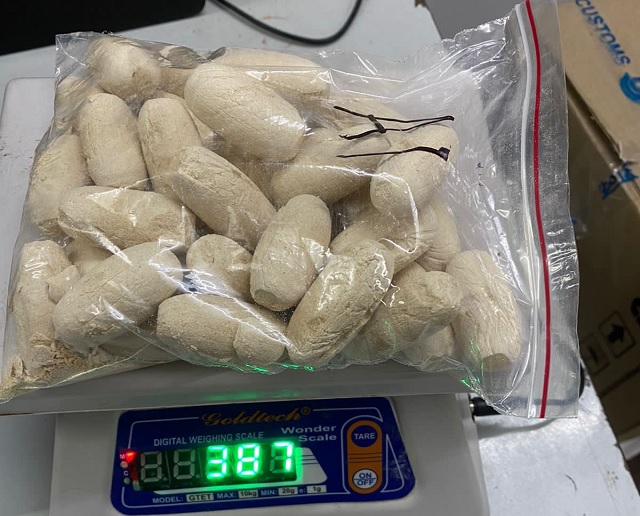 Kampala, Uganda | THE INDEPENDENT | Indian authorities are detaining two female Ugandans for alleged possession of 1.85kilograms of cocaine. According to a tweet from the Customs department in New Delhi, the suspects were picked up shortly after arrival on May 26, 2022, aboard Ethiopian Airlines 686 flight from Addis Ababa.

The department notes that the cocaine was recovered from the suspects after medical supervision in RM Hospital. India’s National Drugs and Psychotropic Substances Act, 1985 prohibits the manufacture, distribution, financing, and consumption of illegal substances.

Section 23 of the Act provides that any person who engages in illegal import or export or transshipment of narcotic drugs or psychotropic substances shall on conviction serve a jail term ranging from one year to 20 years and various fines based on the quantity of the banned substance.

Thirteen Ugandans have so far been detained at Delhi Airport this year over narcotic substances. The Delhi Airport customs department reported in March this year that it had detected 13 cases of narcotics smuggling and seized 32.5 kilograms of heroin and 6.5 kilograms of cocaine in the last six months. In the same period, 14 people were arrested including 6 Ugandans in February and January.

On May 15, 2022, the same department detained a Ugandan traveler who was found in possession of 1.8 kilograms of cocaine. The department said that the cocaine was “concealed in 210 buttons of 5 kurtas stitched randomly.” On April 11, a Ugandan passenger under medical supervision was discovered to have ingested 69 pellets of cocaine, weighing 762 grams.

Another Ugandan who arrived on March 3  from Entebbe via Sharjah was held over possessing 921 grams of heroin. Another 894 grams and 815 grams of heroin were recovered over several days from two other Ugandans on the same flight.

On February 19, a Ugandan passenger arrived from Nairobi with 949 grams of heroin while another Ugandan arriving from Doha was intercepted at Delhi Airport with heroin. The male traveler had ingested 51 capsules, weighing 501 grams.

On February 4, a Ugandan arriving from Sharjah admitted to having swallowed 30 capsules of heroin. After ejection, the capsules weighed 382 grams. A Ugandan passenger who arrived on January 18 from Entebbe via Dubai was detained at Dehli airport with 1.2 kilograms of heroin. She had concealed the drugs in her undergarments, according to the customs officials.