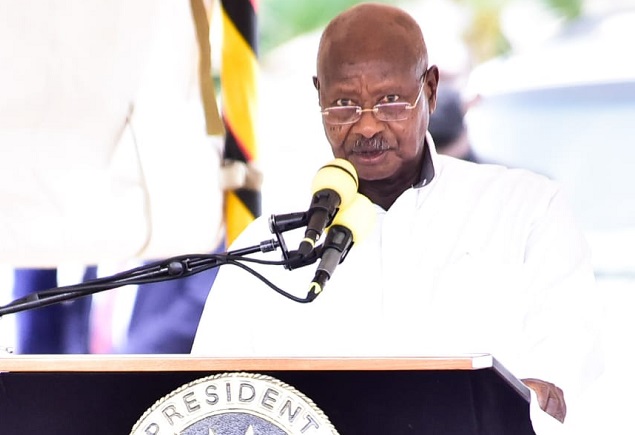 President Yoweri Museveni delivers his  State of the Nation Address.

Kampala, Uganda | THE INDEPENDENT | Uganda has surpassed the middle-income status threshold and is only awaiting a declaration, according to President Yoweri Museveni. In his State of the Nation Address on Tuesday, Museveni said that the economy has now grown to US$ 45.7 billion, which is slightly above the population of the country.

Museveni said this has been achieved in spite of the many challenges that the country has faced in recent times. He noted that the growth of the country’s economy suffered a setback due to the current crisis but said that Uganda can take advantage of the supply shortages. He said that even with that and the high population growth, the Gross Domestic Product has continued to grow.

The world’s middle-income countries are defined as lower-middle-income economies if they have a Gross National Income per capita between US$ 1,036 and US$ 4,045. The gross national income is the total domestic and foreign output claimed by residents of a country, consisting of gross domestic product, plus factor incomes earned by foreign residents.

It excludes income earned in the domestic economy by nonresidents. On the other hand, GDP is the total monetary value of all the finished goods and services produced within a country’s borders in a specific time period.

It functions as a comprehensive scorecard of a given country’s economic health. Museveni says the economy would be performing even better if it had not faced the previous and current crises like COVID-19, the Ukraine war, and natural disasters.

The president reiterated his stand against tax cuts to help ease the prices of essential imports. “Cutting taxes or subsidies, especially on imports, is suicidal because our people may buy carelessly and we end up draining our forex reserves. Moreover, cutting taxes or subsidizing means taking away money from planned projects and putting it into consumption.”

He however said Uganda can take advantage of what is happening around the world, with some countries like India and Malaysia withholding exports. “Before the global destabilization by COVID-19 and the Ukraine crisis, Uganda was a country of surpluses crying out for market for sugar, maize, chicken, eggs, milk, etc this global crisis actually presents Uganda with plenty of opportunities,” he said.

Uganda has only to deal with the issue of standards so as to have her products accepted in the global markets, according to Museveni.