Peshawar, Pakistan — Pakistani authorities have arrested two men for allegedly murdering two female family members after a video which showed them being kissed by a man was posted online, police said Sunday.

The two women were killed on Thursday in a northwestern district near the Afghan border, where women often have few rights and are subjected to strict tribal codes that limit their movement outside of the home.

"Both men have confessed to killing them," said police official Mohammad Nawaz.

The two men — one of whom was the father of the first victim and the other was the brother of the second, were both being held in custody pending trial.

Police said the victims were in their 20s and had appeared in a short video that was posted online that showed them being kissed by a man.

The women were later gunned down in North Waziristan's remote Garyum village and buried by family members, according to Nawaz.

Loye Daraz, a second police official in the area also confirmed details of the incident.

Police said authorities were searching for two other suspects who were believed to have been involved in the killings.

BBC News said a senior local police official told Pakistan's Dawn newspaper that the video was apparently shot almost a year ago, but went viral on social media just a few weeks ago.

The officer told Dawn that police were focused on the safety of a third girl and the man seen in the video. 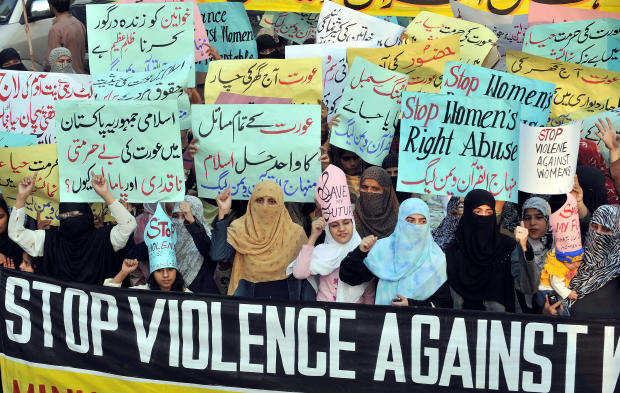 Around a thousand Pakistan women are murdered in so-called "honor killings" each year - in which the victim, normally a woman, is killed by a relative for bringing shame on the family.

Perpetrators have often walked free because of a legal loophole that allowed them to seek forgiveness for the crime from another family member.

But the government has since passed a law that mandates life imprisonment even if the attacker escapes capital punishment through a relative's pardon.

In September a Pakistani court sentenced three men to life in prison for the murder of three women filmed enjoying themselves at a wedding in 2012.

Griezmann will miss Barca's last two games in La Liga. He was out for at least three weeks
Inter midfielder Brozovich was stripped of his driver's license. He was driving a Rolls-Royce under the influence of alcohol
Former player of the Australian national team and crystal Palace Edinak finished his career
These stadiums will open in 2020: record-breaking expensive-in the United States, with illuminated facades-in Georgia
Hames wants to leave Real Madrid and is actively looking for a new club
Should we cut off our hands? This madness. Atalanta almost nailed Juve, but lost the victory due to two penalties
Director Of Juventus&nbsp;Partici: Dybala is a very important player for us
Source https://www.cbsnews.com/news/pakistan-honor-killing-women-allegedly-sparked-online-video-showing-them-kissed-by-man/

How 6 Problem-Solvers Tackled Pandemic Challenges In Their Neighborhoods

Churches amid the pandemic: Some outbreaks, many challenges

A year after leaving prison, he has a job, a fiancée and maybe only a week of freedom

You Haven't Heard The Last Of Iowa This Election Cycle

What We’ve Learned from 101 Years of American Unrest

What Donald Trump Could Learn From Playing Poker

Mexico City was once the realm of the mammoth

Three teachers who shared a classroom got coronavirus. One of them died

Historians will likely rank Trump as one of the worst presidents

How to Interview Celebrities, With Taffy Brodesser-Akner

Dear Care and Feeding: My Husband and I Always Agreed We’d Have More Than One Child. Now He’s Changed His Mind.

RGV to Amitabh Bachchan: I won't pray for you, but I will pray for Coronavirus

Three Arizona teachers who shared a classroom got coronavirus. One of them died

Love in the time of coronavirus: Couples share how they found matches in the middle of a pandemic

Live with snoops or just want privacy? Tech smarts for your smartphone

Trump vs. the Women Who Lead Michigan: A Battle With 2020 Implications

What Trump Wants From Roger Stone

The mystery of the 1998 World Cup final

Trump Wears a Mask Publicly for the First Time

Ronaldo: The mystery of the 1998 World Cup final, and why Brazil's star striker barely turned up

Record heat possible from California to Texas on Sunday

Could This City Hold the Key to the Future of Policing in America?

Most Births at a Concert?! The Wildest Records Ever Written Into the Music History Books

Corey Lewandowski praises Goya Foods CEO: 'This guy stood up to the left'

TikTok star among 13 arrested for murder of realtor in Ramanagara

Outspoken Chinese Professor Is Said to Be Released From Detention