Dr. Cory Franklin was the head of medical intensive care at Cook County Hospital during an unforgettable five days in July 1995, when a “crisis in slow motion” swamped the emergency room.

A freakishly severe heat wave turned the city into an inferno, sending hordes of people to the hospital and more than 700 to the morgue. Franklin recalled treating a roofer whose body temperature hovered around 111 degrees, the highest he had ever seen (incredibly, the man survived).

Memories of that hellish week are stirring again 25 years later, but this time with a twist: A lingering heat wave is colliding with a pandemic, producing new risks whose gravity has yet to be determined. 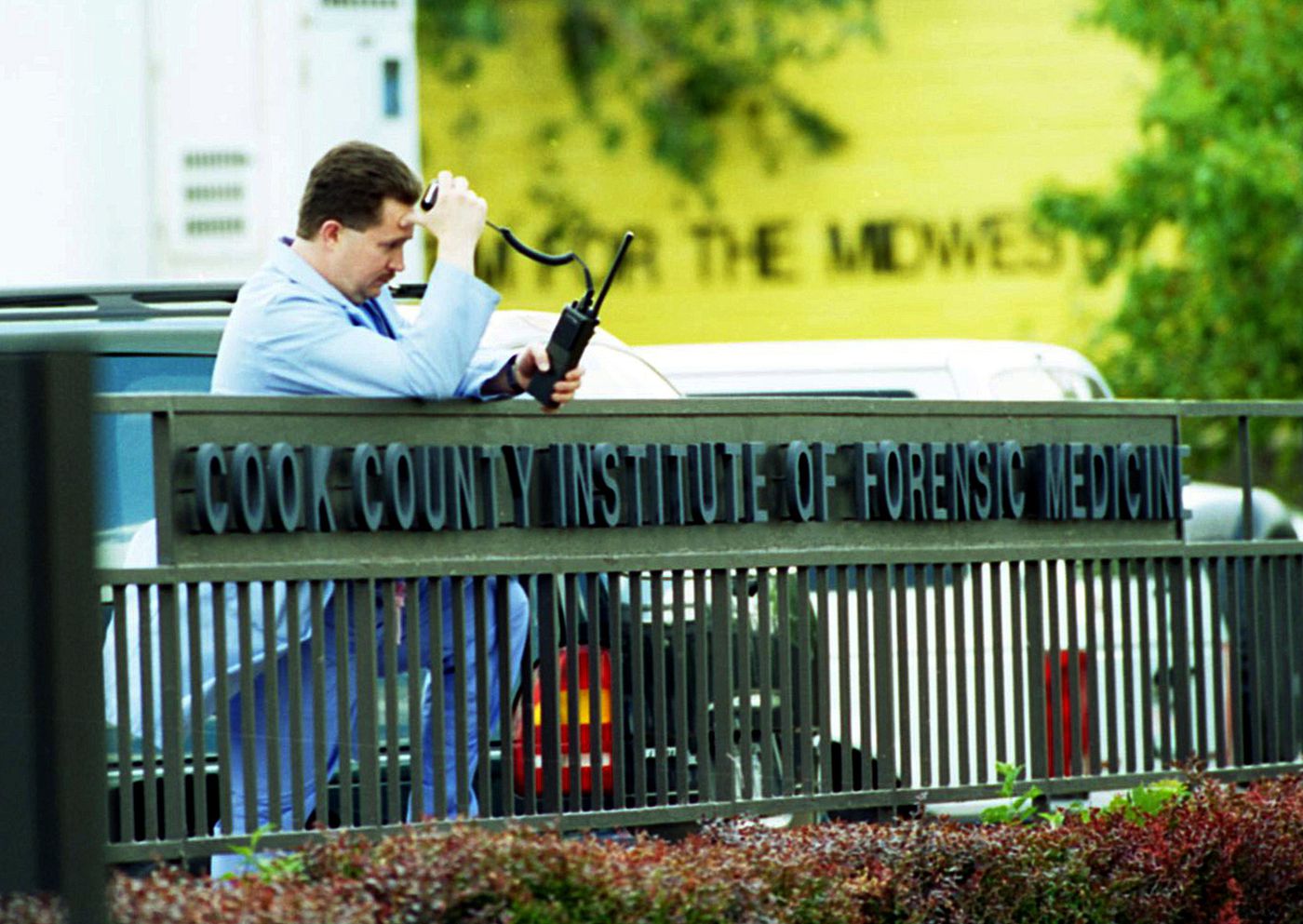 The scene in the parking lot of the Cook County Institute of Forensic Medicine as police wagons arrive to drop off the bodies of people who had died in the heat wave on July 17, 1995. The bodies were kept in refrigerated trucks until they could be processed in the morgue. (Jose More/Chicago Tribune)

The summer of 2020 has trapped Chicago between two scourges. In one corner, a deadly virus that can be easily transmitted in crowded indoor settings, especially when cooling systems are just recirculating virus-pocked air. In the other, a heat wave with the potential to kill.

Government officials have learned many lessons since 1995, and with preventive measures now in place, Cook County usually sees just a handful of heat-related deaths each year. But some worry COVID-19 could upset that progress.

The pandemic has forced people to stay home to prevent the spread of the virus, and some experts say fear of contracting the disease could keep them there even as their houses and apartments grow dangerously hot.

“What’s concerning during this pandemic is we don’t know how effective some of those strategies and measures (to combat heat deaths) can be,” said Olga Wilhelmi, a research scientist at the National Center for Atmospheric Research who is studying the intersection of COVID-19 and extreme heat. “Do cities make them available to use, and are people willing to use them?”

On July 12, 1995, after days of continuous rain, a musty heat spread across the Chicago region and temperatures soared with a record-high heat index of about 126 degrees.

Air conditioners quickly sold out. Thousands took to Lake Michigan for solace in the cool water. 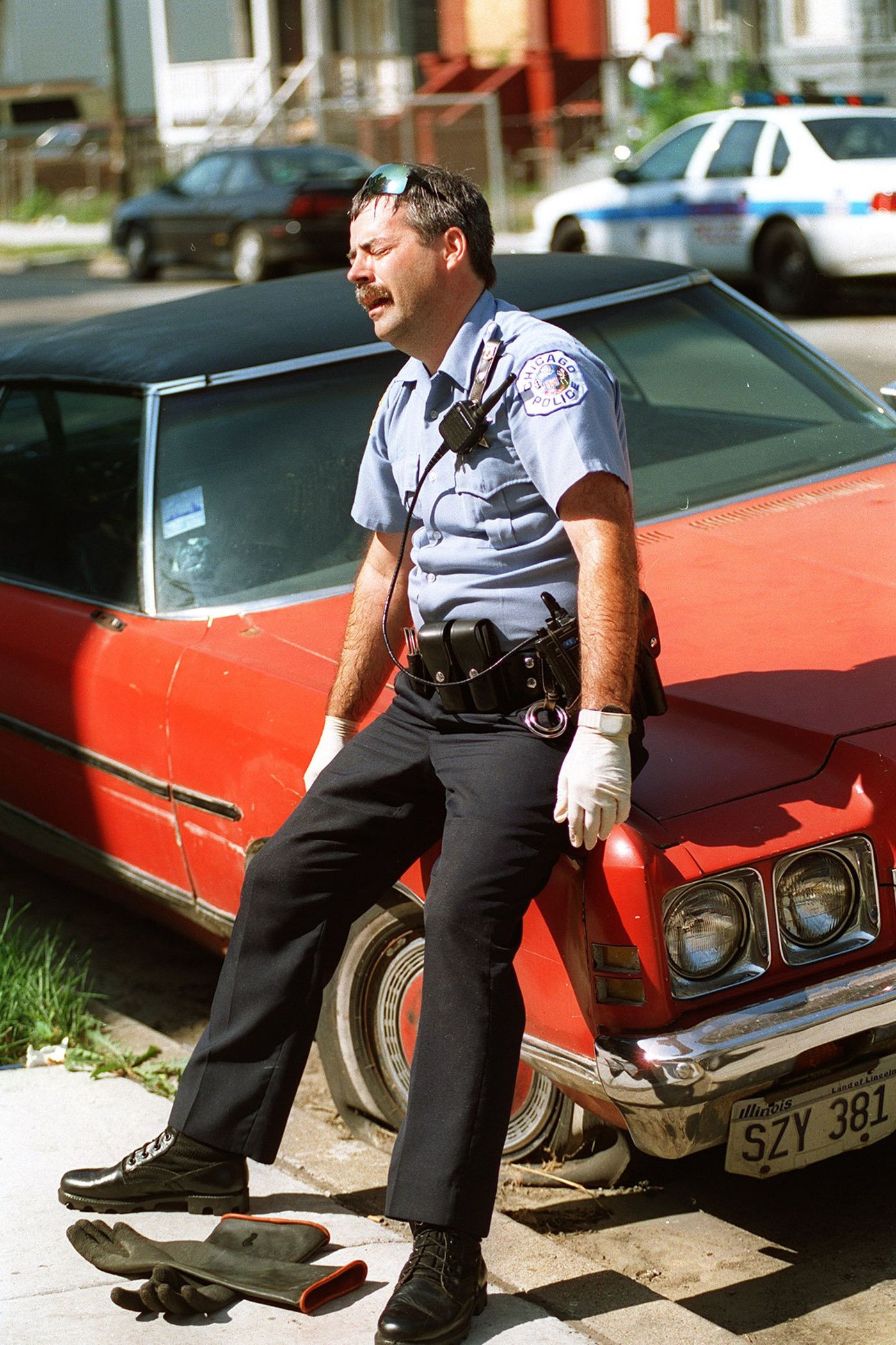 Chicago police Officer Charles Henson of the Englewood District is shaken after removing a heat victim's body from an apartment where two people died on July 17, 1995. (Phil Greer/Chicago Tribune)

The heat index climbed well past the level required to trigger the city’s emergency heat plan. But instead of raising an alarm, city leaders waited three days before warning residents.

“We all have our little problems but let’s not blow it out of proportion,” said then-Mayor Richard M. Daley. “It’s hot. ... Let’s just all work together and calm down.”

Within days, hundreds of decomposed bodies were piled into the Cook County medical examiner’s office. Overloaded with work and out of space, officials had to enlist volunteers to carry bodies from police wagons into refrigeration vans donated by Taste of Chicago.

“We had all of our people working, and many of them doing things that they didn’t normally do,” recalled Edmund Donoghue, who was Cook County’s chief medical examiner in 1995.

Most afflicted by the severe heat were the elderly, poor and minority populations, many of whom lived in homes where the cooling system, if it existed at all, was inadequate. 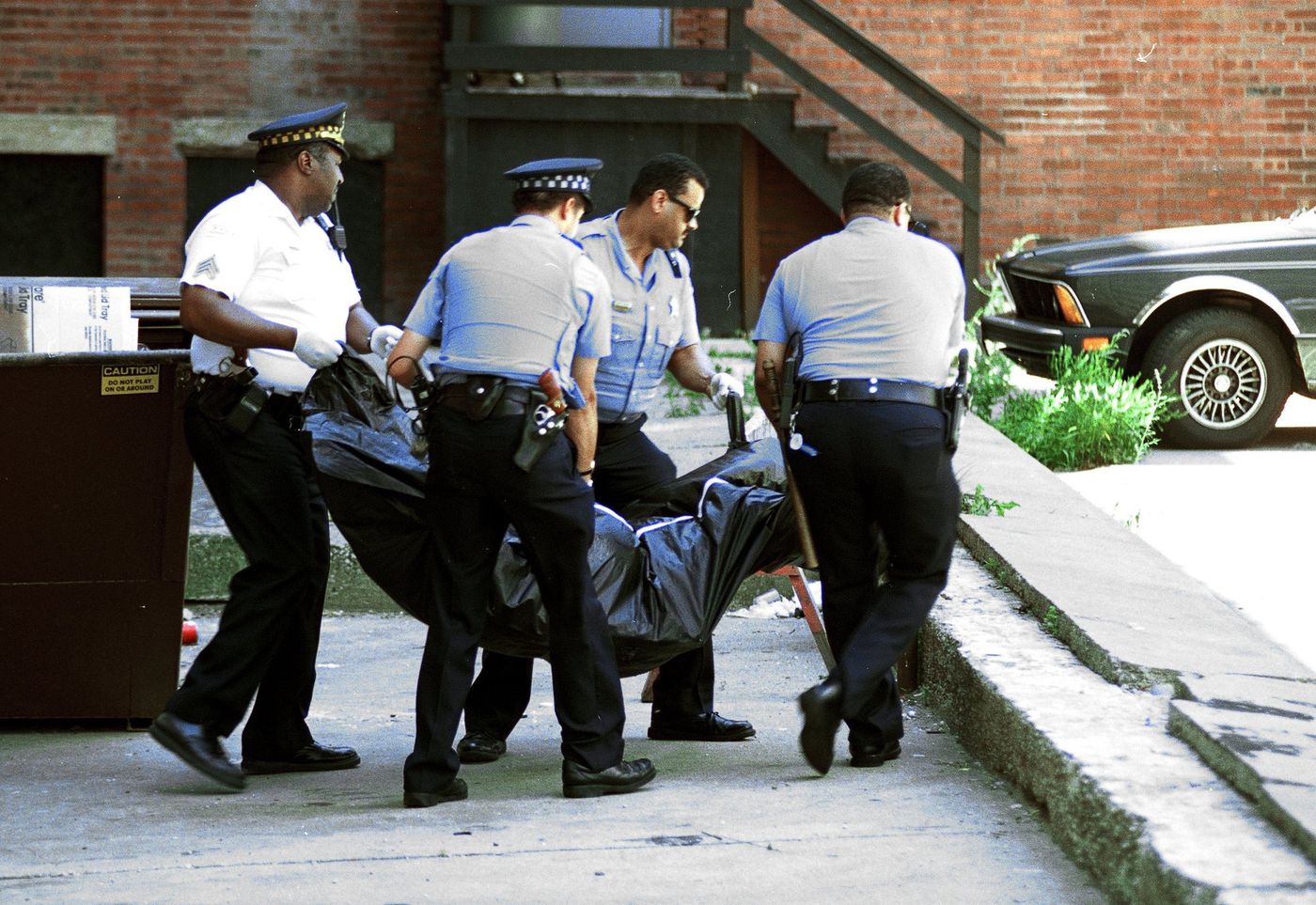 Chicago police officers remove the body of man at the Sutherland Hotel in the 4600 block of South Drexel Boulevard on July 18, 1995. Officials said the death was linked to the extreme heat. (Phil Greer/Chicago Tribune)

“These were people whose lives could’ve been saved had they been given access to air conditioning and power earlier,” said Eric Klinenberg, a sociology professor at New York University and author of the book “Heat Wave: A Social Autopsy of Disaster in Chicago.”

He added: “In the poor, segregated neighborhoods, especially on the South Side and the West Side, the suffering was overwhelming, and the death rate was enormous.”

Although the elderly accounted for most of the victims, there were exceptions. On July 14, as the temperature rose to an unbearable degree, a home-based day care provider took a group of children to the movies and McDonald’s before returning home and accidentally leaving two of the kids — Geno Rouse and Kenneth Brown — in her van for two hours.

The children died. The day care provider faced criminal charges and was sentenced to two years of probation.

Geno’s mother, Atondra Rouse, now a 58-year-old Chicago Public Schools teacher, said she recalls her son’s death every time she gets in a hot car.

“Even with the air on, I have to roll down my windows,” she said. “I have to have air coming in.”

“It got the politicians and public health people to realize that something like this could be a major emergency,” Franklin said.

Donoghue said the main takeaway was the importance of air conditioning. 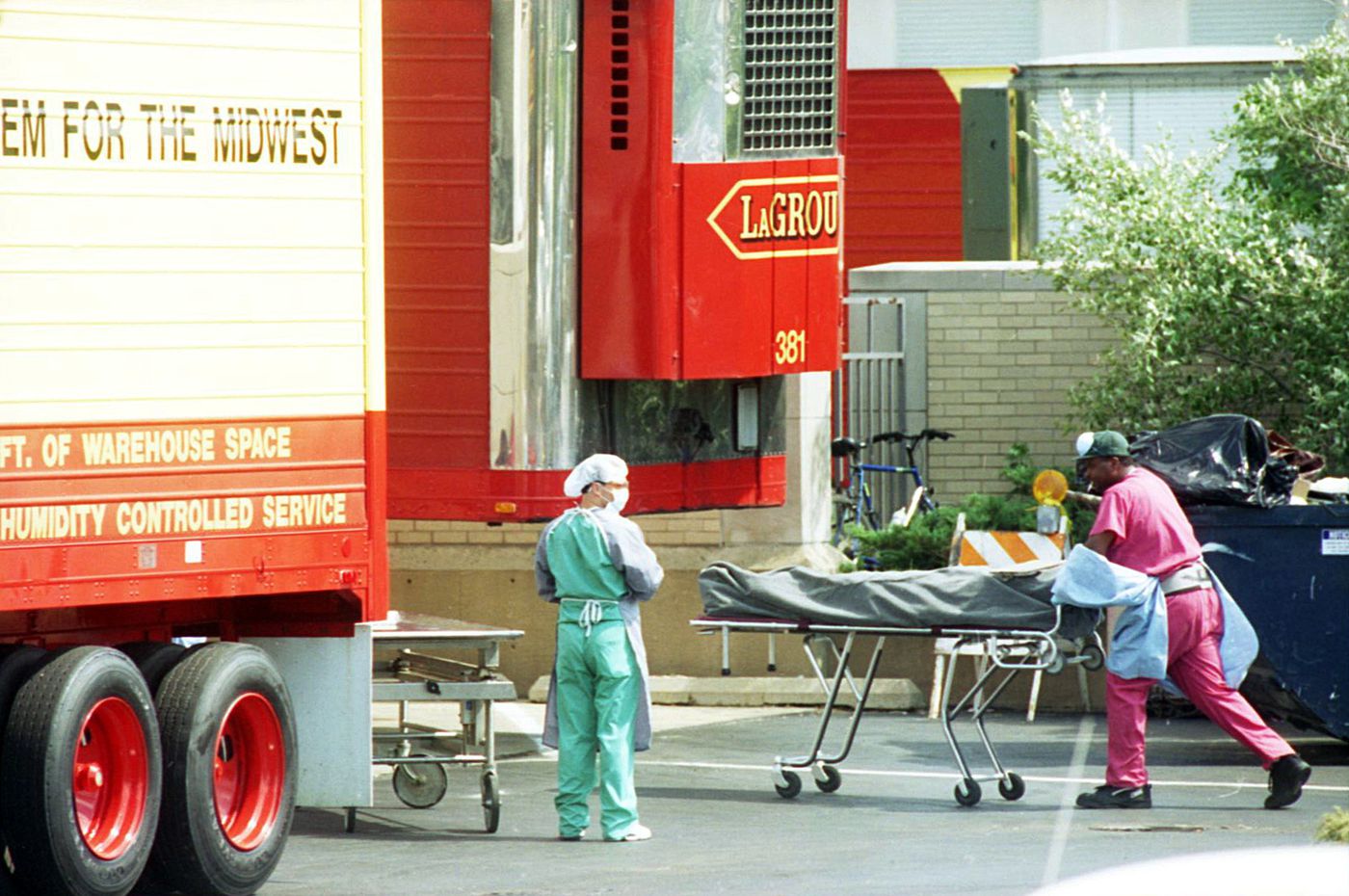 Workers from the Cook County medical examiner's office move a body on July 18, 1995, to one of the refrigerated trucks that were being used for overflow storage outside the Cook County Institute of Forensic Medicine at Harrison and Leavitt streets. (Nancy Stone/Chicago Tribune)

“Nobody who had an air conditioner who used it died,” he said. “So where we saw deaths were with people who either didn’t have air conditioning, or had it but didn’t want to turn it on because it was too expensive to pay the electricity bill.”

That is a particular concern in COVID-ravaged 2020, when thousands of city residents have lost their jobs. In the face of the pandemic, Chicago has announced a bill relief program for water and sewer, services it controls, but not power, which is provided by ComEd.

The utility did not respond to the Tribune’s request for comment.

Elise Gout, research associate with the energy and environment team at the Center for American Progress, said extreme heat, like COVID-19, reveals structural inequities, and the combination compounds them.

“The idea of forcing these families to make a choice between the security of their homes in a pandemic and finding a cooler area is unacceptable,” she said.

Dr. Emily Landon, a COVID-19 expert at University of Chicago Medicine, said air conditioning can present its own problems, noting a theory that the pandemic has flared in the Sun Belt because people are avoiding scorching summer temperatures by congregating in cool but poorly ventilated indoor spaces. 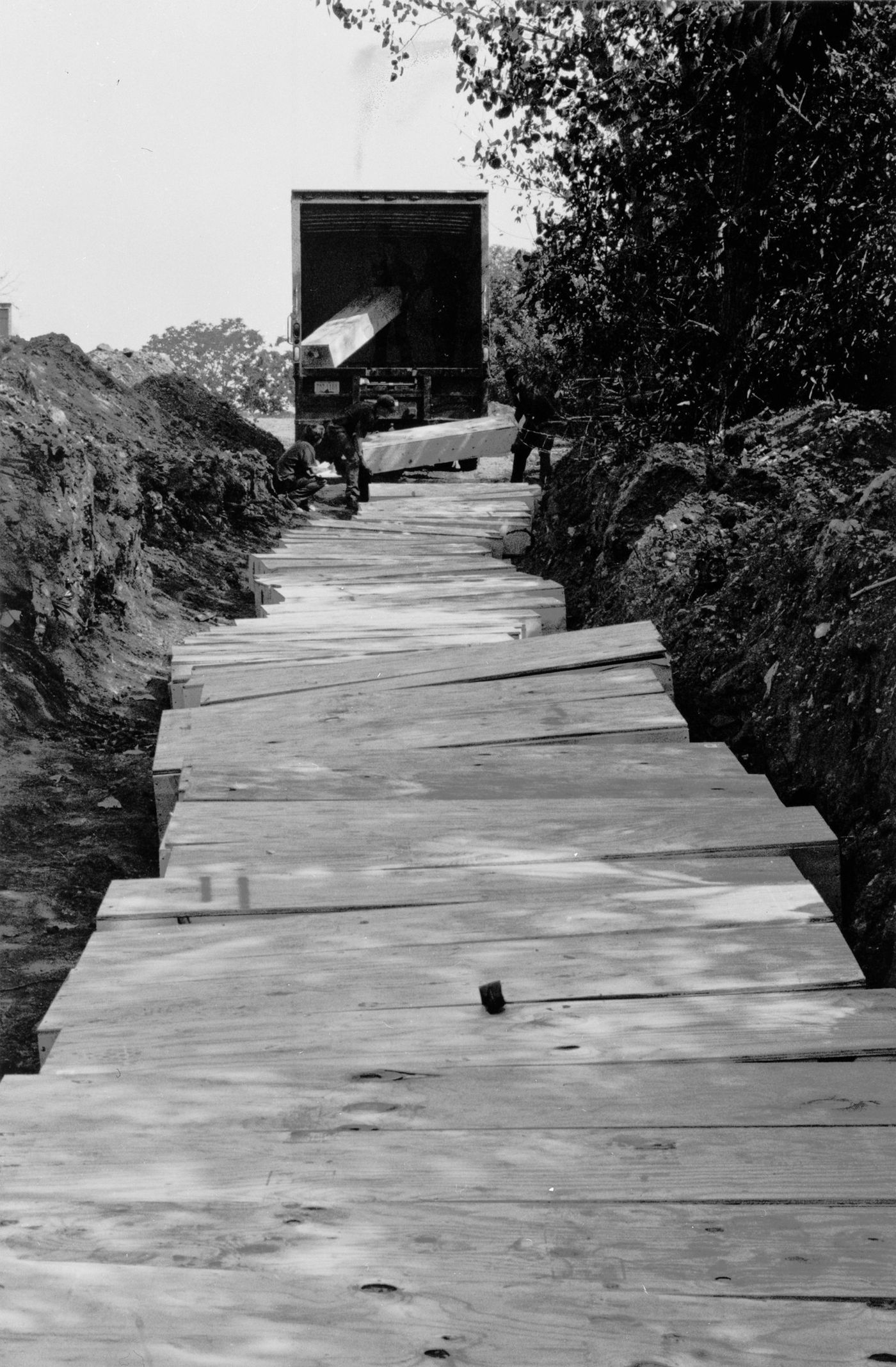 Many of the victims of the 1995 heat wave left no family or were indigent. Of the 68 unclaimed bodies that county workers are shown burying here, 41 died of heat-related causes. (John Smierciak / Chicago Tribune)

But while it’s safer to be outside — heat and humidity create an inhospitable atmosphere for the virus, she said — Chicago’s beaches and public pools remain closed for fear of attracting dangerously large crowds. Landon said she still thinks that’s a good idea.

“Those crowded pool scenes from Memorial Day, I think we all agree we don’t need to try that right now,” she said.

No heat alarm — yet

For now, the situation seems to be under control. Officials at Cook County Health and Loretto Hospital said they aren’t seeing many heat-related emergency room visits, and as of Friday afternoon, Cook County had not recorded any deaths associated with high temperatures.

Simone Mitchell-Peterson of the social service agency Little Brothers-Friends of the Elderly said her group is conducting hundreds of well-being visits, and has been able to provide enough fans and air conditioners to keep people at home.

“We’re doing everything we can to make sure their needs are met so they can stay cool and comfortable where they reside,” she said.

For those who do need to seek relief, city officials have pledged to keep cooling centers safe with social distancing and mask policies.

Demand so far appears to be manageable: A Tribune reporter found no one at a cooling center in Bronzeville Thursday afternoon despite scalding temperatures, while just a handful of people were seated in an icy meeting room in an East Garfield Park community service center.

They watched the news on a wall-mounted TV or dozed in chairs set roughly 6 feet apart. A 33-year-old woman who declined to give her name had a suitcase full of her belongings by her side; she said she has been transient for several months, living in shelters and hotels due to family problems.

She said she has been nervous about contracting COVID-19 as she moves between shelters and temporary living spaces. But now there is another foe to dodge.

“It’s scorching,” she said through her mask.

The National Weather Service says that after a few days of mild relief, 90-degree days will return midweek. Meanwhile, state officials on Friday announced 1,317 new COVID-19 infections, the highest total Illinois has seen in a month.

Kike Of Setian: I didn't think that the match with Napoli could be my last in charge of Barca
Where the Champions League left off: Sarri risks being relegated from Lyon, while Real Madrid will face city
Josep Bartomeu: Messi is the best player in history. He wants to stay at Barca
Ex-Director of Valencia on the transfer of Ronaldo: in 2006, the club agreed with his agent and sponsors, but the deal did not take place
Klopp, Lampard, Rodgers and Wilder claim the award for the best coach of the Premier League, Pep-no
The authors of Showsport choose the winner of the Champions League: Chernyavsky - for Leipzig, Muiznek believes in real 🤪
Trent, rashford, martial and Greenwood are up for the award for the best young player of the season
Source https://www.chicagotribune.com/coronavirus/ct-1995-heat-wave-25th-anniversary-covid-20200711-4kyiclqpjjhwxkp3rg4m45zyva-story.html#ed=rss_www.chicagotribune.com/arcio/rss/category/news/

Detroit Tigers use infield shifts more than any team. This is why they're doing it

Who is the Narrator of ‘Tiny Creatures’ on Netflix?

All of this week’s best new movies are about anxiety. In a good way.

To slow coronavirus, a California county might pay the sick to stay home

Judge: U-M must send letter to 300,000 alumni, alert them of Anderson lawsuits

Why Joe Biden Keeps Missing His Own V.P. Deadlines

'Knight Rider' returning to big screen, but what car will play KITT?

Official's use of racial slur prompts calls for his resignation

The best sales to shop this weekend: Casper, Gap, HP and more

Lebanon president: Beirut explosion either due to negligence or missile, bomb

Out of work and with families to feed, some Americans are lining up at food banks for the first time in their lives

US Postmaster DeJoy says election mail will not be slowed down

Lives Lost: Man of the sea who made Arizona desert home

Salary caps for teams in lower leagues of English football

Score over 40 hours of marketing knowledge for $35

'A League of Their Own' series gets greenlight at Amazon

GOP senators tiptoe around Trump as the party faces growing political dangers ahead of Nov. 3

I could not keep my success: Chunky Pandey

Who Sold the $40 Million Home on ‘Selling Sunset’?

With her ‘Jaguar’ project, Victoria Monet has written her perfect moment

Brent Scowcroft, a Force on Foreign Policy for 40 Years, Dies at 95

Melissa Etheridge realized she couldn’t save her drug-addicted son

Canada Is Imposing Retaliatory Tariffs On The U.S.