The key moment of the game was a pick-six thrown by Stafford on an intended screen pass to Cooper Kupp. Talanoa Hufanga read the play like a book, jumped the route, bobbled the ball for a second and bolted his way into the end zone to make it a two-possession game.

But that wasn’t the only time the Niners’ defense stymied the Rams’ offense.

Four sacks were collected in the first half, as Stafford had a hard time in his own pocket. The 49ers would finish with seven on the night, with Pro Bowler Nick Bosa and Samson Edukam leading the way with two apiece. 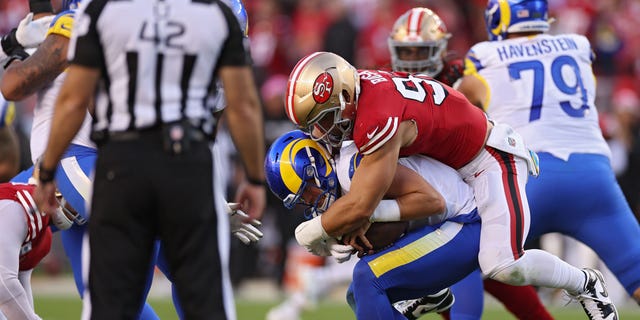 On offense, Deebo Samuel led the way with 115 receiving yards that included a 57-yard touchdown catch-and-run in the second quarter. Samuel stayed upright after multiple tackles and used his blazing speed to get across the field and into the end zone for six.

Jeff Wilson Jr. had the first touchdown of the game, thanks to a perfect hole that opened the way to a 32-yard run for the score. He finished the game with 74 yards on 18 attempts.

Kupp was the only threat for the Rams in this one. He had 14 catches, a new career-high, for 122 yards and one touchdown, though that score came at the end of the game and didn’t mean too much. 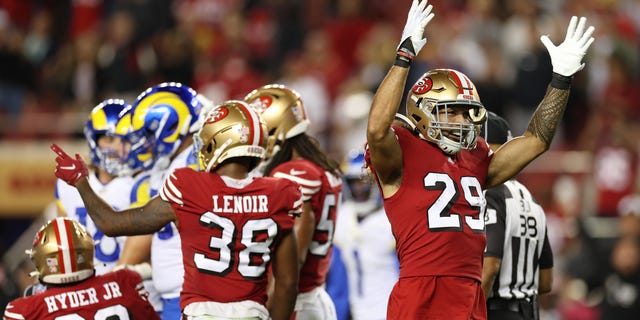 Stafford finished the game with 254 yards on 32-for-48 with no touchdowns and one interception.

On the ground, the Rams were stuffed at the line as Cam Akers had just 13 yards on eight carries, while Darrell Henderson Jr. had seven carries for 27 yards.

As for the 49ers, Jimmy Garoppolo cashed in on his incentive-laden deal, getting a win as the team’s starter after throwing for 239 yards on 16-for-27 with the one touchdown pass to Samuel. And compared to Stafford’s rough night with pass rushers, Garoppolo was never sacked.

Head coach Kyle Shanahan is 7-0 against the Rams in the regular season since Garoppolo became his starting quarterback. 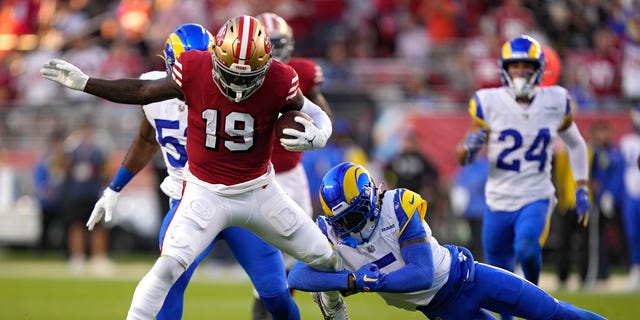 Wide receiver Deebo Samuel #19 of the San Francisco 49ers rushes for a touchdown as he breaks a tackle by cornerback Jalen Ramsey #5 of the Los Angeles Rams during the second quarter at Levi's Stadium on October 03, 2022 in Santa Clara, California. (Thearon W. Henderson/Getty Images)

The 49ers, now 2-2, head to Carolina to face the Panthers next Sunday, while the Rams head back home to see the Dallas Cowboys, who could have Dak Prescott back under center, at SoFi Stadium.