That’s thanks to a surge of primary wins by Democratic women of color like Candace Valenzuela, who could be elected the first Afro-Latina member of Congress this fall, and a huge uptick in victories by Republican women, many of whom were motivated to run after seeing the “blue wave” during the midterms.

2018 “was very much the year of the women on the left. If they can do it, so can we,” Olivia Perez-Cubas, a spokesperson for the Republican action fund Winning for Women, previously told Vox.

In the more than 30 states that have held primaries so far, more women have already secured their party’s House nominations than did last cycle.

As of earlier this week, 243 women had won House primaries this year, including 169 Democrats and 74 Republicans, according to the Center for American Women and Politics at Rutgers University. That’s outpacing the 2018 results, when 196 women — 152 Democrats and 44 Republicans — won after the same states had voted. (These numbers don’t include the updated figures from the most recent August 11 primaries or runoffs.) 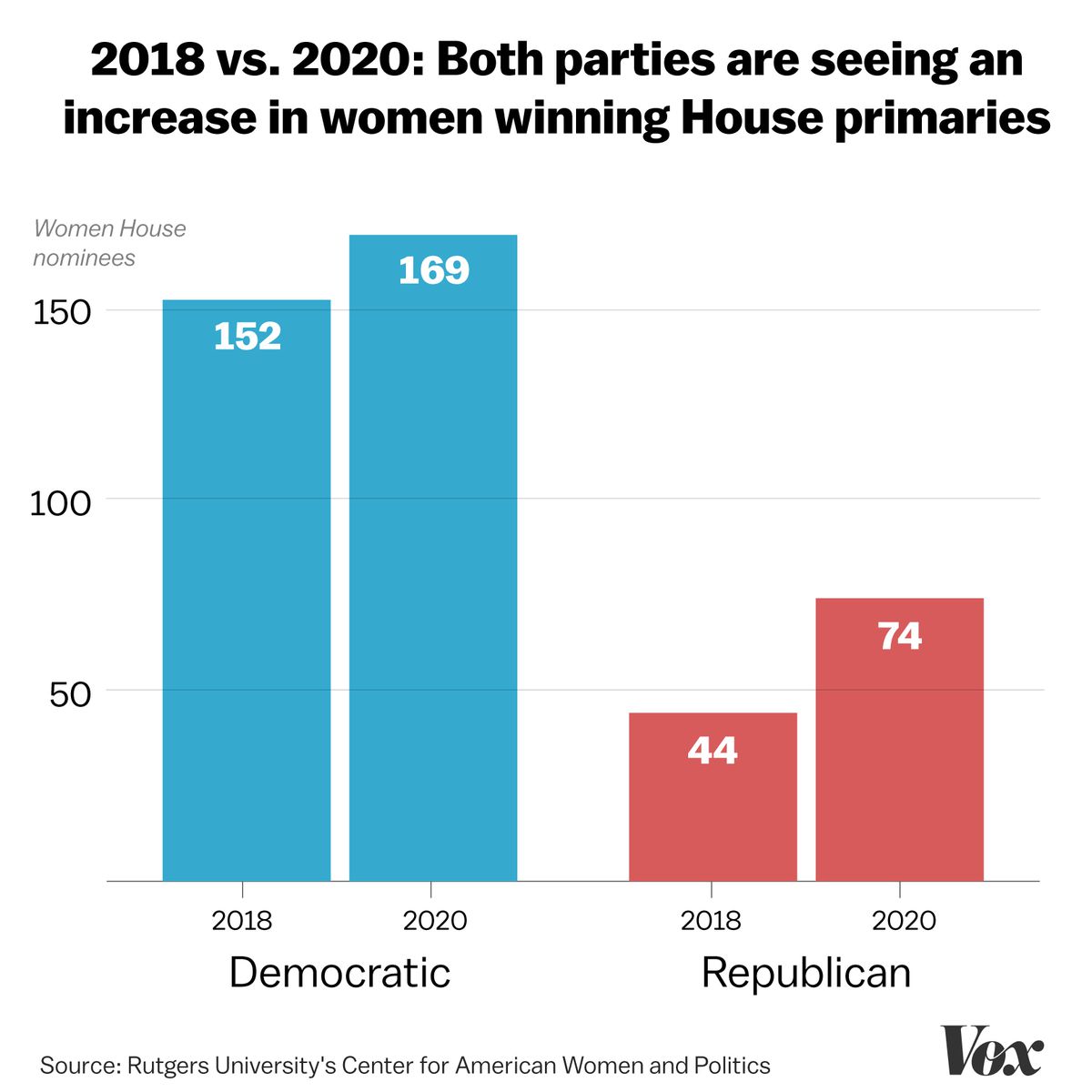 This data indicates that more women could win seats in the House this cycle than in 2018, according to Rutgers political science professor Kelly Dittmar.

“It seems likely but not guaranteed,” she tells Vox, adding that specific matchups in 2020 will be important to watch. For example, many of the Democratic women who won battleground districts in 2018 are also among those who are most vulnerable this cycle. And a record number of districts will see races with women candidates on both sides of the aisle, which is notable in itself but could mean that the number of women in the House won’t go up as much. 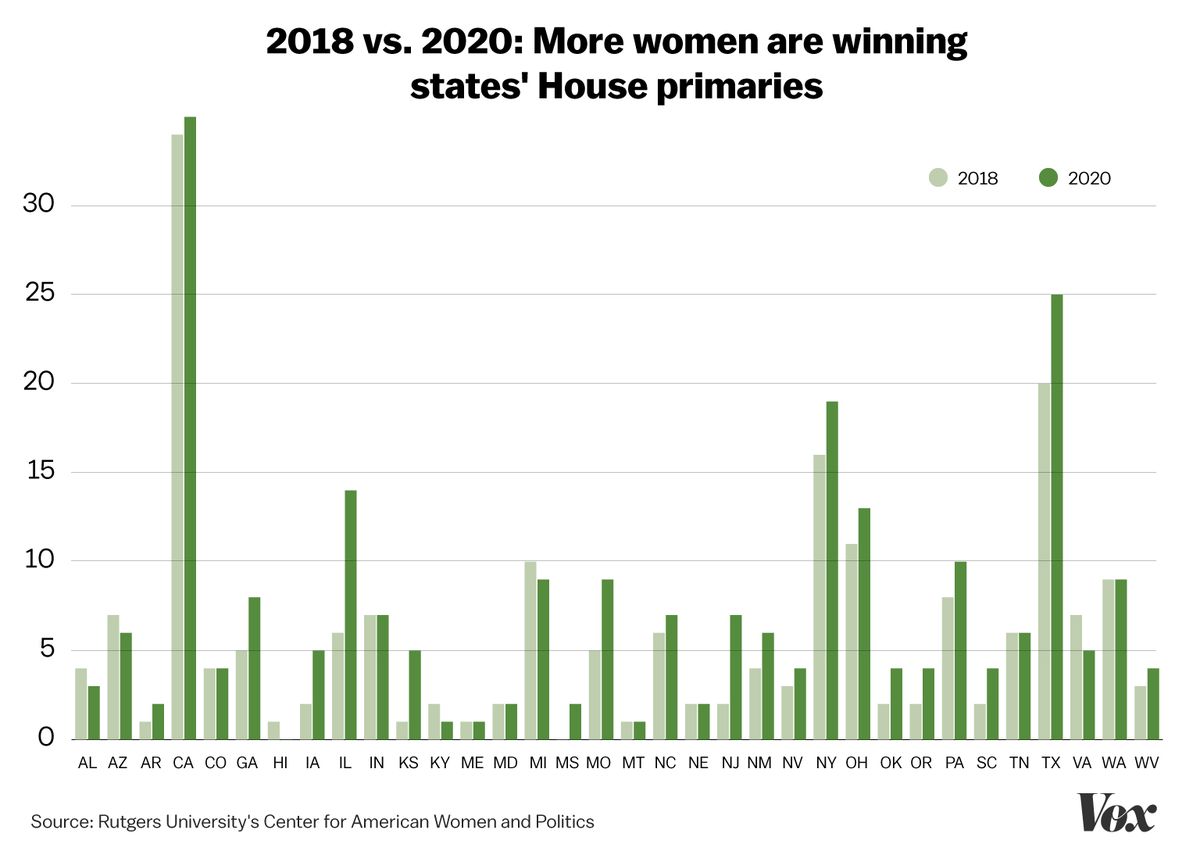 Still, the sustained number of women candidates is significant. Thus far, 583 women have filed to run for a House seat in total, compared to 476 who did the same in 2018. And there’s been a major surge in the number of women of color running this cycle. In 2020, 248 women of color have filed as candidates, an increase from the 167 who ran during the midterms, according to CAWP.

This year’s gains indicate that 2018, which some dubbed the “Year of the Woman,” was no isolated spike. The fact that even more women are running this year — including on the Republican side — marks a continuation of the energy that emerged during the midterms, and suggests that it’s here to stay.

This year, there have been gains in women candidates on both sides of the aisle

This year, however, Republicans have seen an uptick in women running — and winning their primaries. Altogether, 227 GOP women have filed to run, versus the 120 who did in the midterms, a party record.

The shift has been driven by a couple of factors, including significant investment in recruitment by groups such as VIEW Pac, E-PAC, and Winning for Women, some of which mobilized further in the wake of Republicans’ disastrous midterms showing.

As Rep. Elise Stefanik (R-NY) put it, the party was facing a “crisis level of Republican women in Congress” following the 2018 election. Additionally, there’s been GOP women motivated to declare their candidacies after seeing how successful Democrats were during the midterms.

Republican women have said, too, that they don’t feel their perspectives are fully represented by the party at this moment. For some, that includes pushback toward President Trump, while for others, it includes an effort to run in order to support his policies.

Valerie Ramirez Mukherjee, an investor running in Illinois’s 10th Congressional District, thinks the party could be more ideologically inclusive. “We can have a variety of voices. I’m a moderate Republican. Now is a chance for us to rebuild,” she told Vox. And Vennia Francois, a candidate in Florida’s 10th Congressional District, emphasized that she’s running, in part, to promote more bipartisanship.

Compared to 2018, when 44 Republican women had won by this point in the primary, 74 women have advanced this cycle, as of earlier this week, including Mariannette Miller-Meeks in Iowa, Nancy Mace in South Carolina, and Michelle Steel in California.

These wins are a significant sign of the progress Republican women have made in the primaries — a contest in the election cycle that’s often stymied candidates due to a lack of infrastructural support. But, as CNN reports, many of these candidates are set to face tough general election races and unlikely to get elected to Congress.

Still, it’s important that the GOP maintain and increase its focus on growing representation for Congress to ultimately achieve gender equity. “If there are going to be significant gains, a prerequisite is that both parties are going to have to be fielding female candidates,” says University of Virginia political science professor Jennifer Lawless.

Across party lines, a record number of women of color are running for the House.

In 2020, both Democrats and Republicans are seeing a more diverse pool of women filing for these positions, a nearly 50 percent increase from the number of women of color who did in 2018. Democrats, however, still far surpass Republicans on this front, with 162 Democratic women of color filing to run, compared to 86 who did on the GOP side.

Based on how candidates self-identify, CAWP found there are a record number of Black, Latinx, Asian American and Pacific Islander, and Native American women who are running for the House this year.

“2020 is already the year of women of color,” Aimee Allison, the founder of She the People, told Vox. “We are on the front lines defending democracy and fighting for justice in the face of the immense challenges during the pandemic to our collective physical, mental, and economic health.”

The records this year are likely influenced by the gains that women of color made in 2018: That year, Reps. Deb Haaland and Sharice Davids became the first Native American women elected to Congress, and Reps. Jahana Hayes and Ayanna Pressley were the first Black women from their states elected to Congress.

Despite the wins in 2018, congressional numbers on gender parity are unfortunately still quite dismal — today, about 23 percent of the House is composed of women.

And while many of this year’s candidates won’t be elected to Congress, they’re still making other notable inroads: Even if they lose, these candidates have now established stronger infrastructure for another campaign down the line and helped further normalize women’s candidacies for these roles.

“As more women run, more women get interested in politics and think it’s a plausible path for them,” Notre Dame political science professor Christina Wolbrecht told Vox in 2018. The presence of women — as both candidates and elected officials — could well have a multiplier effect that further increases the number of women who seek office in the future.

Will you become our 20,000th supporter? When the economy took a downturn in the spring and we started asking readers for financial contributions, we weren’t sure how it would go. Today, we’re humbled to say that nearly 20,000 people have chipped in. The reason is both lovely and surprising: Readers told us that they contribute both because they value explanation and because they value that other people can access it, too. We have always believed that explanatory journalism is vital for a functioning democracy. That’s never been more important than today, during a public health crisis, racial justice protests, a recession, and a presidential election. But our distinctive explanatory journalism is expensive, and advertising alone won’t let us keep creating it at the quality and volume this moment requires. Your financial contribution will not constitute a donation, but it will help keep Vox free for all. Contribute today from as little as $3.

Lucien Favre: it's Great when Dortmund wins 3-0, but Gladbach didn't have many players
De Gea failed to repel 18 consecutive penalties in the Premier League. The last save was in 2014
Torres on leaving Liverpool: there Was no Xabi, Mascherano, Benitez, there was no project... Nothing happened!
Koeman can't be on the Barca bench. All due to the fact that the club is suing Setien
Suarez turned down an offer from Inter Miami in the summer. He could become the highest paid player in the MLS
Barcelona gave Aceme rental Almeria. The defender wanted to sign Juventus
Manchester United lost the first game of the Premier League for the first time in 6 years and for the third time in 29 seasons
Source https://www.vox.com/2020/8/14/21302945/women-record-house-primaries

Bleach touted as ‘miracle cure’ for coronavirus being sold on Amazon: report

Inside the ‘abusive’ troubled-teen industry that Paris Hilton exposed

Lightning vs. Stars: What bettors can expect in Stanley Cup final

As Gareth Bale Returns to Spurs, Only Perceptions Have Changed

The Latest Positions of Key Senators on Ginsburg’s Replacement

In the Supreme Court Battle to Come, Here Are the Senators to Watch

Killed in WWII, these New York City brothers were buried side by side

Ginsburg’s death leaves Obamacare in greater danger than ever

Cardinals vs. Pirates prediction: Under is smart play here

Alicia Keys: I was supposed to end up a prostitute or a drug addict

Ginsburg Remembered As A Champion Of Women's Rights

‘I loved her to pieces,’ retired Justice Souter says of RBG

Ricin Is Said to Have Been Sent to White House

Gary Sanchez’s resurgence has been ‘massive’ for Yankees

Who's On President Trump's List To Replace Ruth Bader Ginsberg?

Who's On President Trump's List To Replace Ruth Bader Ginsburg?

Astros’ Verlander to have elbow surgery, miss rest of season

Ranking the most rewarding NY teams to come out of nowhere

Felicity Jones says Ruth Bader Ginsburg 'taught us all so much'

US sends armored vehicles to Syria amid fears of ISIS resurgence

A Tip Sheet to the Senate Fight Over Ginsburg’s Seat

Robert W. Gore, the inventor of Gore-Tex fabric, dead at 83

Ruth Bader Ginsburg was shaped by her minority faith