Muslim women around the world have increasingly taken to the streets to demand greater rights and freedoms. The women of Iran are TIME’s 2022 Heroes of the Year for their ongoing protests, which started out as an outcry against enforced dress codes and has grown into the largest, most sustained uprising the Islamic Republic has faced.

In Indonesia, the largest Muslim-majority country in the world, Muslim women are asserting their voice in a different manner: instead of mass demonstrations, they’re pushing for greater recognition that women, too, can be knowledgable authorities on Islamic values. And they’re making headway, even as the country seems to move in a more conservative direction.

Five years ago, a group in Indonesia did something unique: they convened the world’s first congress of women “ulama,” the Kongres Ulama Perempuan Indonesia or KUPI. Last month, they convened again, bringing together more women ulama, academics, and activists from across the country and around the world to share their experiences and views. 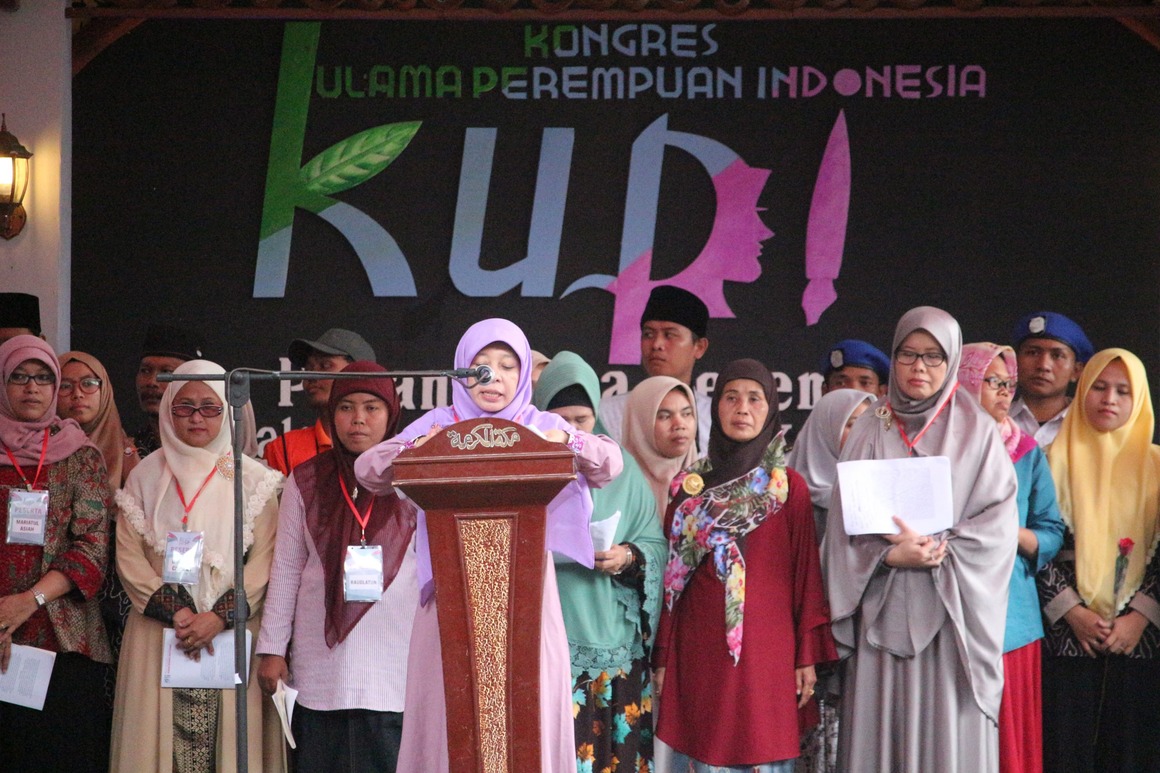 The closing of the first Kongres Ulama Perempuan Indonesia in 2017.

Ulama are Islamic scholars whose advanced understanding enables them to be spiritual and community leaders. Many work in roles such as running Islamic boarding schools or as preachers. Importantly, ulama can issue fatwas, clarifications or interpretations of the religion. In Indonesia, the top council of ulama holds growing influence over the government; its former chairman is the country’s current vice president. However, traditionally, those recognized as ulama have primarily tended to be men.

KUPI “shows that women have a role to play as interpreters of the religion, as people who can put fatwas out,” says Rachel Rinaldo, an associate professor at the University of Colorado Boulder who specializes in gender and religion. She adds that, over time, the KUPI movement will “help to disseminate more progressive interpretations and to perhaps bring more women into Islamic leadership.”

Earlier this year, Indonesia’s Nahdlatul Ulama, the world’s largest Islamic organization, appointed two women to top leadership positions for the first time in the organization’s 100-year history. At this year’s KUPI conference, a national minister promised to support a push for greater women representation in local government across Indonesia, saying that women ulama can play a major role in leading villages and empowering women in areas beyond religion, like education.

KUPI organizers say that the movement has put Indonesia at the forefront of the efforts to produce women-friendly interpretations of Islam and popularize gender-equitable religious views. Ruby Kholifah, a Jakarta-based human rights activist and the Indonesia director of the Asian Muslim Action Network, one of five organizations behind this year’s conference, says that although there has been work on gender and Islam ongoing for several decades, before KUPI, those working on the issues didn’t have a network and did so mostly individually.

“We thought why not come together so we can give more voices to the women ulama that have been working on women’s rights issues so that we can be heard in the public and shift the public in a more moderate direction on religion,” says Kholifah. “I think our voices are louder than when we work separately.”

This year, female clerics and participants from around 30 countries—including Malaysia, Nigeria, Turkey, India, South Africa, Canada, Finland, Iraq, Burundi, and Kenya—also attended. Eva Nisa, a senior lecturer in anthropology and an expert in Islamic studies at the Australian National University, says that, through KUPI, Indonesia’s women ulama can act as “role models for other gender-just activism in other Muslim-majority countries and beyond.”

Although Indonesia has had a reputation for being moderate, religious conservatism has gained traction in recent years. On Tuesday, for example, the country revised its criminal code to make sex outside of marriage illegal and to expand its blasphemy law. The women behind KUPI hope that the fatwas they help issue will help shape what life is like for women in Indonesia.

Kholifah says that the topics discussed for issuing fatwas on were decided about a year in advance of the conference by seeking opinions in focus groups. Although there has been widespread attention on the hijab elsewhere—like in Iran where women have protested against morality police enforcement of dress codes or in Europe where Muslim women have demonstrated for their right to wear religious headscarves—KUPI’s planning process kept the contentious topic from being added in at the last minute. Instead, this year’s meeting ended with the issuance of five fatwas on the topics of of religious-based violence, waste management and environmental sustainability, forced marriage, abortion in the case of rape, and female genital mutilation.

Kholifah believes these fatwas “will reshape the way government is dealing with the issues,” pointing, for example, to the fatwa issued after this year’s KUPI relating to pregnancy due to rape. Although abortion is legal in Indonesia in the case of rape or medical emergency, advocates have said that its difficult for victims of sexual violence to access abortion care. “It seems like at a national level the government is reluctant to push safe abortion access for rape cases,” she says. “KUPI wants the government to really pay attention to this. We hope by having this fatwa, it can increase confidence among the government, and the government can accept as much as possible all recommendations relating to women rights and Islam and because they have a strong back up from KUPI.”

Their prior work has already had an impact, according to organizers. Since 2017, when KUPI issued fatwas on sexual violence, child marriage, and environmental degradation, the Indonesian government has legislated changes relating to two of the fatwas issued. In 2019, the country raised the age that women can marry from 16 to 19. And in 2022, a sexual violence law was passed which provides protections to victims of sexual violence, including those in abusive marriages.

“Those two fatwas were very much successful and used by women activists and the government as a reference,” says Kholifah, acknowledging, however, that the third fatwa, on environmental degradation, was less successful. “I think successful advocacy at the national level,” she says, “stemmed from the contribution of KUPI to open the conversation.”

Write to Amy Gunia at amy.gunia@time.com.