Abbreviated Pundit Roundup: Florida out of control as AZ and TX are not far behind 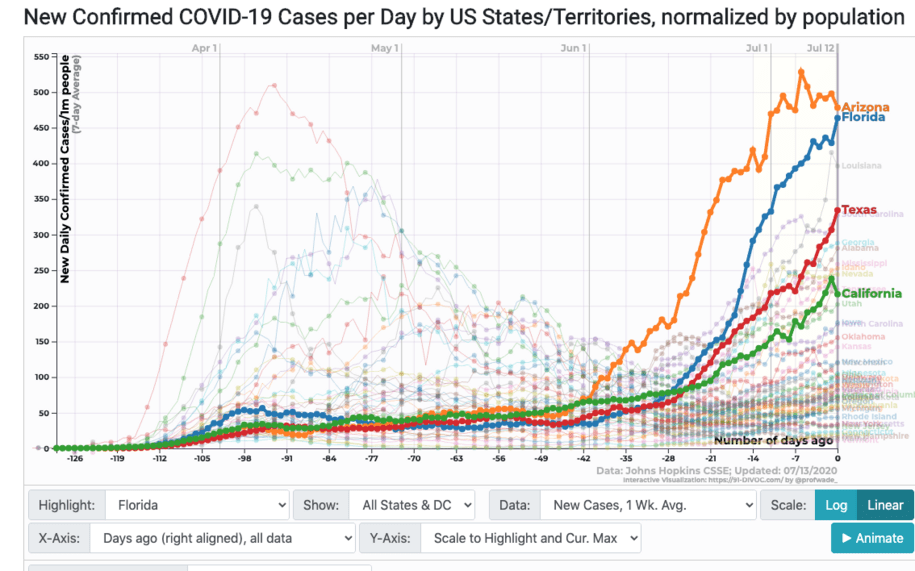 The hotspots might be running short on tests, so don't be comforted by flattening just yet

The staggering number was the result of both increased testing and widespread community transmission that has affected the state’s population centers as well as its rural areas. It shattered previous highs of 11,694 reported by California last week and 11,571 reported by New York on April 15.

“With Florida largely open for business, I don’t expect this surge to slow,” wrote Natalie E. Dean, an assistant professor of biostatistics at the University of Florida.

Managing a novel pandemic is hard.

You can be forgiven for making mistakes.

You won't be forgiven for not trying.

Andy Slavitt/Twitter lays out exactly what is happening and what will happen next:

Three things are going to happen next.

-In phase 2 states (AZ, FL, TX, Southern CA) the death rate is going to start moving up the back half of July
-Phase 3/4 states (the rest) will begin to follow the path
-Phase 1 (NE) will have a constant vigilance for the Fall Wave 2

Observing what’s happened in AZ, FL, TX is instructive.
Even though with COVID-19, one thing ALWAYS leads to the next, at each stop, there was strong denial that the next step would happen.

Denial pattern, pt 1
We opened— but not so many cases
We open more— bars/churches/indoor dining
Cases grow— but only young people
Hospitalizations grow— but the cases are younger! And we can handle it!
Hospitals begin to fill— Maybe a little caution is in order folks

Somewhere along the way the governor decides to take taken. In baby steps. And the later &amp; more baby the steps, the worse it is.

-Most importantly, close the bars. See my call today.
-Mask policy
-Close other indoor public spaces
-If all else fails, shut down

There’s much more, and your essential read of the day,

Our daily update is published. Sundays and Mondays are when we tend to see the numbers dipÃ¢ÂÂand we see that today. Still: 62k cases, rising hospitalizations, and a large jump in deaths over last SundayÃ¢ÂÂs holiday numbers. The 7-day average is now back over 700. pic.twitter.com/5hdQFxQ2OJ

Wearing a mask doesn't just save lives, it can also help people save money. If the United States were to mandate that all Americans wear masks, it would save the country from deleterious economic lockdowns that would reduce the gross domestic product by 5%, or about $1 trillion, according to an analysis by Goldman Sachs.

Individual households would feel the reduction too: A sharp decrease in GDP like that equals higher prices for fewer goods and services, and also fewer jobs, economists note. Assuming universal mask wearing prevents a 5% loss to GDP, the habit would lead to roughly $3,000 in savings per person in the U.S.

"The overall macro impact of not wearing a mask on the economy will have a potentially devastating impact on individuals and families," said Chris Foster, the former worldwide chief operating officer of advertising giant Saatchi &amp; Saatchi. He's now advocating for widespread mask use as chief management officer of School Mask Pack, which sells non-medical mask kits for families.

There may never be a second wave, just a continuous stream of infection wherever individuals let down their guard. The first wave is complicated and confusing and not over—and may not end until a vaccine is successfully distributed, Dr. Osterholm told JAMA editor-in-chief Howard Bauchner, MD, on the “Conversations with Dr. Bauchner” video podcast.

The future of this pandemic is hard to predict, and even the present is still murky, he said amid major surges in COVID-19 case counts in California, Texas, Arizona, Florida and many other states south of the Mason-Dixon line.

“I know less about this virus today then I did six weeks ago. The more we learn, the more humble we need to be about what it means,” Dr. Osterholm said.

Ã¢ÂÂRepublican senators and challengers lagged behind Democrats by a collective $30 million in the first quarter of 2020, a deficit stemming from DemocratsÃ¢ÂÂ superior online fundraising machine. Since then, Democrats' fundraising pace accelerated furtherÃ¢ÂÂ https://t.co/H21epgWcnZ

The coronavirus outbreak is reshaping the presidential race in three key Sun Belt states. Joe Biden is now leading President Trump by six points in Florida, and the two are tied in Arizona and competitive in Texas, where Biden is down by just a point to Mr. Trump. Biden has made gains in part because most say their state's efforts to contain the virus are going badly — and the more concerned voters are about risks from the outbreak, the more likely they are to support Biden.

In all three states, most voters say their state reopened too soon, and those who say this feel their state went too fast under pressure from the Trump administration. Most also say the president is doing a bad job handling the outbreak. He may be paying a price for that, at least in the short term.

This is helping Biden not only to post bigger gains with groups that already trend Democratic — like women and younger voters — but also to cut into Mr. Trump's margins with seniors. Seniors who are very concerned about coronavirus back Biden in large numbers. 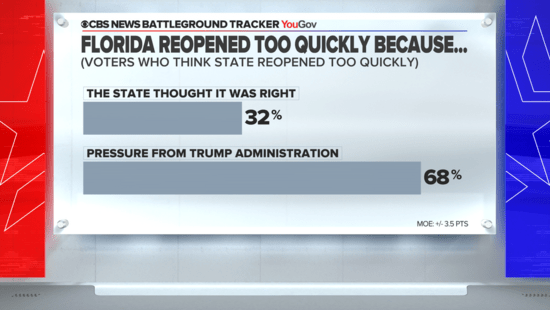 People know who to blame

Betsy DeVos failed to answer a single question from @DanaBashCNN on #CNNSOTU about how this administration would ensure the safety of students, educators, &amp; their families.

How not to govern, from Politico:

Florida will start getting shipments this weekend of an antiviral drug that has shown signs of helping severely ill Covid-19 patients — cargo senior aides scored in part from New York just as Gov. Ron DeSantis was publicly dismissing the state's help, emails show.

Fresh doses of remdesivir were expedited with help from Vice President Mike Pence and U.S. Health and Human Services Secretary Alex Azar, DeSantis told reporters Saturday during a news conference at the Blake Medical Center in Bradenton, noting that hospitals across the state will start receiving shipments. While DeSantis was quick to praise the Trump administration, the governor spent the past few days downplaying the notion that New York Gov. Andrew Cuomo's office had come to Florida's aid.

Sanchez finished the match against Bayer, despite the injury
Solskjaer is the fifth coach with whom Manchester United reached the semi-finals of the European Cup
Manchester United are set to buy Sancho this summer despite Borussia's claim that he is staying
Shirokov beat the judge at an Amateur tournament: promised that # # # # # [vdarit] for a red card-and # # # # # [vdarit]
Brunu has scored 11 goals in 20 games for Manchester United. 7 of them were penalties
Lukaku has scored in 9 consecutive Europa League games. This is a tournament record
Konstantinos Tsimikas: Liverpool is the biggest club in the world. I supported them as a child
Source https://www.dailykos.com/stories/2020/7/13/1960220/-Abbreviated-Pundit-Roundup-Florida-out-of-control-as-AZ-and-TX-are-not-far-behind

Derecho with 100 mph winds moves across the Midwest, bringing down trees and power lines in Chicago

Kurt Luedtke Dies: Oscar-winning ‘Out Of Africa’ Screenwriter Was 80

How 'The Tax Collector' topped the box office, when there's no official box office

Despite pandemic, help is still available to sexual assault survivors

Susan Rice Was a Diplomatic Disaster

How College Football Programs Are Working To Ensure There's A Season

New York City is headed for a serious decline

The 'law and order' Democrat that Biden should pick for VP

Gov. Cuomo is snubbing the victims of his fatal nursing-home orders

After 75 days, Louisville has had enough of its too-often violent protests

In a second term, Trump could build on his foreign-policy successes

Amid 40% Rise Of Coronavirus In Kids, School Return Gets Bumpy Start

Donovan Edwards may have future altered if Big Ten football is canceled: 'That's some bull'

Trump: Executive order on pre-existing conditions is 'a signal'

In CA: Roads made out of plastic bottles? Rogue cows? Just another day in the Golden State

Black teens who were victims of a knife attack had guns drawn on them by deputies, lawyer says

Virginia man who drove through BLM protest: 6 years in jail

In Netflix's 'Away,' Hilary Swank stars as an astronaut in trailer

What's on TV Tuesday: The season finale of 'DC's Stargirl'

Washington Post's Jennifer Rubin slammed over op-ed asking, 'Do we even need the Republican Party?'

2020 Daily Trail Markers: Wisconsin voters head to the polls again after "the disaster of April 7"

She is the first American to get a new face -- twice

Trump Considers Banning Re-entry by Citizens Who May Have Coronavirus

Sure? No. But Rob Manfred Is Still Optimistic About This Season.

Biden’s V.P. Pick Is Said to Be Imminent