It's Thailand, not "Thighland", Mr. President. But you sure knew that. Only moments later. 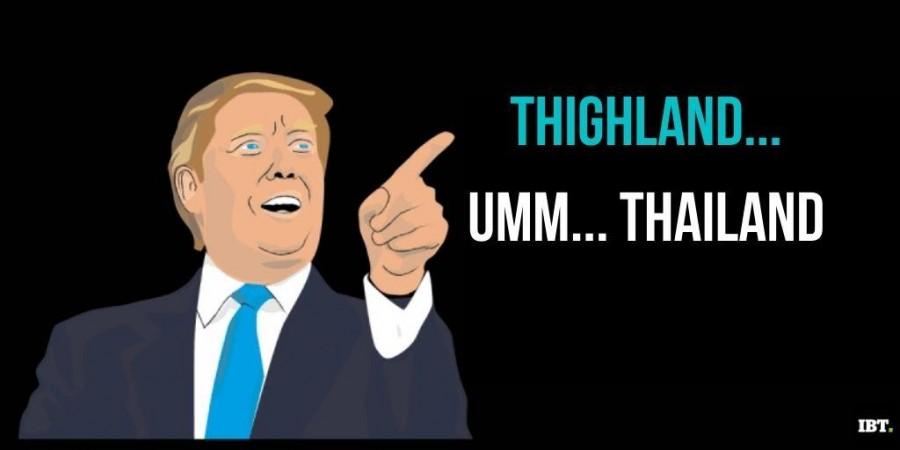 From "Covfefe" to "Yo Semite" and "Frorida" US President Donald Trump's speeches and tweets have been nothing short of a pandora box, which every time it opens gets the world's attention. Trump's recent campaign speech at a Whirlpool plant in Ohio made the headlines for many reasons, but one of them had to do something with Thailand, to be precise "Thighland." No kidding!

"Shifting production to Thighland, and to Vietnam" Trump said, before quickly correcting the pronunciation of Thailand. "Two places that – I like their leaders very much – do they take advantage of the United States? Not so much anymore," he added.

On any other day, it could have been a good save. But it was a campaign speech watched by millions of Americans nationwide. The blunder was caught quickly and started trending on Twitter.

Netizens have a field day

Naturally, memes and mockery take over Twitter as users made funny remarks about Trump's blunder. Check out some reactions below:

Trump's mispronunciation comes just days after he called Yosemite National Park "Yo-semites." Not long ago, he had misspelled hamburgers as "hamberders" and Florida as "Frorida". But that doesn't stop the 74-year-old president from claiming he's sharp as ever - something his presidential rival Joe Biden, 77, also claims.

The presidential election is scheduled for November 3.

Koeman Pro 3:0 with Celta: Proud of the team. The results show that we are on the right track
Milan extended their unbeaten streak to 18 games by beating Rio Ave on penalties in the Europa League qualifier
Arteta on Manchester City in the League Cup: Arsenal are not very lucky with the draw. This is another test
Klopp about losing to Arsenal and Liverpool in the country of dreams, you have to score. Last pass failed
Muller held the UEFA ceremony in the stable. There had Neuer, Kimmich and Evangeliski
Liverpool 4 seasons in a row, cannot get past the 5th round of the League Cup and 2012 wins the tournament
Leno - first Arsenal goalkeeper in 8 years not to miss at Anfield
Source https://www.ibtimes.co.in/after-frorida-trump-makes-another-faux-pas-pronounces-thailand-thighland-825933

Banged-up Heat are not conceding NBA title to Lakers

Packers, Falcons both deal with injuries in receiving group

On city’s first day of early voting for Nov. 3 election, Chicago voters flock to Loop Super site: ‘I’ve been thinking about this day for a long time’

Dixon, Honda look to wrap up IndyCar titles at Indianapolis

When Buccaneers near the goal line, Brady looks for Evans

Giants defense isn’t the scapegoat for this winless start

Gun-toting bandit in chipmunk costume caught on camera in Louisiana

Review: Andrea Riseborough is a master of murder tech in Brandon Cronenberg's 'Possessor'

Elizabeth Hurley shares her secrets to staying in shape at 55

Facebook bans ads that aim to undermine the election.

Seahawks confident ugly numbers on defense will turn around

Justin Trudeau And Other Canadian Leaders Do What Trump Didn't: Condemn White Supremacy

For the first time, Amazon shares how many of its workers got coronavirus

After Bitter Debate, Trump, Biden Will Roast Each Other For Charity

The Very Strong Case for Bidenomics

At His Core, Trump Is an Immoralist

IPL13: 269 million viewers watched the season in its first week

Cities, states and businesses brace for election unrest across US

Trump, campaign push back against any debate rules changes

Trump campaign says debate structure should not be changed

Will coronavirus surge in the winter? Experts just don't know yet

This is NOT how you denounce White supremacists