After Isaias, When Will Power Be Back?

Weather: Partly sunny and cooler, with a chance of showers late in the afternoon. High in the low 80s.

Alternate-side parking: In effect until Aug. 15 (Feast of the Assumption). Read about the amended regulations here. 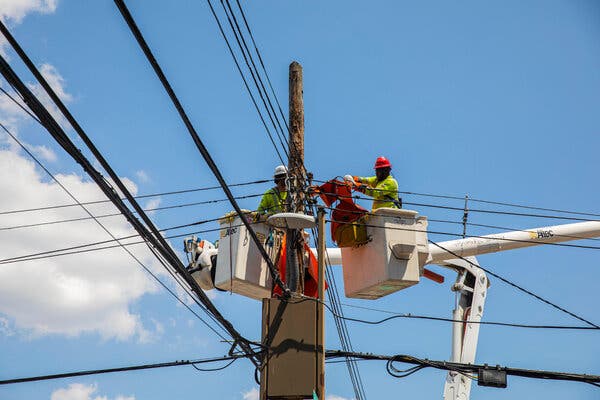 This morning, many people in the New York area are without power, crucial for running air-conditioning on scorching summer days and powering the electronics that make working from and learning at home possible during the coronavirus crisis.

Since Tropical Storm Isaias tore across the region on Tuesday, utility crews have been striving to restore electricity to more than two million customers, many of them in Westchester County, northern New Jersey and Connecticut.

By the afternoon, Gov. Andrew. M Cuomo had declared a state of emergency in 12 counties.

Allan Drury, a spokesman for Consolidated Edison said on Wednesday that it would take “days, not hours” for some of the repairs needed to restore power. On its website, the company said that the “vast majority” of customers were expected to have their power back by the end of Sunday. Con Edison provides electricity in the city and Westchester.

Several officials, including Gov. Philip D. Murphy of New Jersey, said the damage could have been worse if the storm had not moved so quickly through the area.

Still, there was at least one fatality in the city: A man in Queens was killed when a tree fell onto the car he was sitting in. In Brooklyn, a woman was struck by a branch and critically injured.

[Read more about the power failures and storm damage.]

In many neighborhoods, the storm blew apart outdoor dining areas that restaurants had recently set up to allow them to serve guests outside. Some railroad service was suspended because of problems with overhead wires. Social media was filled with photos of toppled trees.

“We’ve had over 16,000 service requests for downed trees, which I think is the most we’ve ever had in the city,” New York City’s emergency management commissioner told the television station WPIX.

The outages came as Con Edison had been urging some city residents to conserve energy on the hottest days in an effort to prevent blackouts and brownouts. High temperatures and the resulting higher demand for power can cause a utility’s cables to overheat and break down.

Trump’s Bank Was Subpoenaed by N.Y. Prosecutors in Criminal Inquiry

And finally: Five years of ‘Hamilton’

Five years ago today, Lin-Manuel Miranda took his biggest shot yet. He opened his musical “Hamilton” on Broadway, and ever since — until the coronavirus outbreak interrupted — electrified crowds have been humming along to the show’s rap battles and tongue-twisting lyrics.

To mark the anniversary, I spoke with my colleague Michael Paulson, who has covered the musical since its pre-Broadway run at the Public Theater, about the show’s impact and influence:

A: First, it’s genuinely excellent. Second, the subject matter (America, and more specifically America’s revolutionary origins and aspirations) and the casting choices (predominantly Black, Hispanic and Asian-American) feel important and contemporary. And third, it was, at least until theaters shut down, ubiquitous — the show everyone talked about, which made it a must-see.

What influence has the show had on musical theater since its debut?

I want to believe that the success of “Hamilton” is helping to embolden writers and producers to take more risks, topically and musically. It’s hard to know what the next big smash will be, and it undoubtedly won’t look anything like “Hamilton,” but I think everyone who loves theater hopes that the show will have inspired a new generation of musical theater writers to be ambitious and adventurous with their choices.

With discounted tickets and the move to Disney+, what is the musical’s legacy when it comes to increasing access to Broadway productions?

It’s mixed: It’s true that there were substantially discounted lottery tickets and free shows for students at schools with high percentages of low-income families. The show’s artists have also done an amazing job engaging with their fans. But seeing the show on Broadway, and in many other cities, is still quite expensive. (The best seats cost $847 before the pandemic.) That kept the show unaffordable for many people.

It’s Thursday — write like you’re running out of time.

Moving to the West Village from the suburbs was a dream that finally became reality when my children went to college in the early ’90s.

As I moved into the tiny apartment, I realized that my beloved antique iron headboard would only fit in the bedroom if I was willing to live with the door opening just enough for me to pass through sideways. I decided I was.

I lived that way for a few years before finally bringing the headboard to the curb and replacing it with a much smaller one that allowed me to open the bedroom door all the way.

About six months ago, I heard some banging and scraping outside my apartment. I opened the door and saw my next-door neighbor dragging my old headboard out of his apartment.

Apologizing for the noise, he said that he had found it at the curb years ago and loved it, but that he grown tired of walking into his bedroom sideways so he was returning it to the street.

Barcelona's Interest in Isak Increased after Koeman's appointment. Larsson has a high opinion of the player (Mundo Seportivo)
Manuel Pellegrini: When you play against Real Madrid and var, it's too much
PSV and Porto are Interested in Barcelona midfielder PUC. He doesn't want to leave the club
Puyol about Barcelona: If we want to win the championship, we need to perform very well
Schalke sacked Wagner. The team has not won the Bundesliga since January
Iacini on 3:4 with Inter: Even a draw would be an unfair result, given how many chances Fiorentina created
Ramos Pro 3:2 with Betis: the Referee tried his best and didn't do anything intentionally
Source https://www.nytimes.com/2020/08/06/nyregion/power-outage-ny-nj-ct.html

Chicago violence: Girl, 5, stabbed to death in another bloody weekend

Karnataka Farmers up in arms; list of major protests in state [areas to avoid]

Saints fumble away late momentum on curious call vs. Packers

3 women shot while sitting on South Side porch, police say

Jimmy Butler was an easy get for NBA Finals-bound Heat

What Sunil Gavaskar actually said; how it was tweaked, twisted and condemned [In Depth]

Tokyo Olympics Q&A: Should athletes be priority for vaccine?

Not Shahrukh, not Gauri, this person controls their house 'Mannat'

Biden urges pause on Trump court pick until after election

We don't even smoke, said actresses at NCB office

Karnataka Bandh: What Will Remain Closed and What Will be Open in Bengaluru Today

Amazon to kick off holiday shopping with October Prime Day

At least 16 killed in coal mine accident

One person seriously injured after car overturns on I-270 in Montgomery Co.

Timbers score early and hold off the Whitecaps 1-0

Huawei CFO case back in Canadian court on Monday

Asia shares up ahead of China holiday, presidential debate

It's a myth that women don't want sex as they age, study finds

1 in 3 parents won't get flu shots for their child during Covid-19, study finds

Shepard Smith Returns To The Anchor Chair On CNBC For Opinion-Free Newscast: “We’re Not Here To Tell You How To Think”

Court Politics Will Get Uglier than Ever Before

2020 French Open: What to Watch on Monday

Giants’ penalties cost them in rough loss to 49ers

Packers hold off Saints to remain undefeated after 3 games

Biden Campaign Sprays Trump's Drug Test Puffery: He Can 'Have At It'

Browns have winning record for first time since 2014 after victory vs. Washington

Jets report card: This team does nothing well

Trump Lashes Out at Times and I.R.S. in News Conference