The tech launch season is fully upon us, and we’ve already seen new devices from Samsung and Apple. But now it’s time for Amazon. That means new Echo smart speakers and screen, Ring doorbells and cams, Eero routers and most certainly a few surprises.

Amazon’s event is now in full force with Dave Limp on stage introducing the strides that Alexa and the full device portfolio has made.

For the most part, Amazon’s core Echo has stayed a tall vertical cylinder. But the Echo is going somewhere different. It’s spherical and looks like a mini Death Star. It represents a full redesign from the ground up, but it still maintains the most important part of any Echo: Alexa integration.

This fourth-generation Echo smart speaker features six far-field microphones that work to pick up your voice and clearly hear it. Those audio inputs are paired with three main audio outputs. Powering the sound on the spherical Echo is a 3-inch woofer and dual-firing tweeters. Dolby Atmos processing is on board for a vibrant mix with clear lows, mids and highs. You can connect out to other speakers via a 3.5-mm audio port (and it supports Bluetooth).

Plus, for the first time outside the Echo Studio (Amazon’s high-end $199 smart speaker), this Echo features adaptive sound. Essentially it will intelligently listen to how the audio is flowing in the room and make adjustments for the best mix possible.

But, as expected, the story goes beyond just audio. Powering this Echo is Amazon’s first-generation AZ1 Neural Edge processor — essentially a silicon chip that Amazon designed in partnership with MediaTek. The core purpose and feature-set is designed to accelerate machine learning applications. The biggest improvement? The time it takes to process your voice (before it gets sent off to the cloud.

And Amazon is combining the previous Echo and Echo Plus into this Echo. That means all of the extra smart home features — like ZigBee, Bluetooth Low Energy (BLE) and Amazon Sidewalk –— are all integrated here. So you’ll get easy pairing with an array of smart devices (lights, door locks, outlets and more) with just the Echo and no need for an additional hub. The classic Alexa action and mute buttons are still here. And this incorporates a tap-to-snooze function.

In terms of size, it should be wider than the current Echo but much shorter at just shy of 6-inches. It will be a unique shape for sure and it comes in three colors: Charcoal, Glacier White and a Twilight Blue. All of these feature a “homey” fabric design and are made from 100% recycled products. The classic LED ring light now sits on the bottom, opposed to the top, and should reflect off the surface the Echo lives on with a nice glow.

The new Echo is up for preorder now at $99.99 on Amazon.com and will ship later this year. 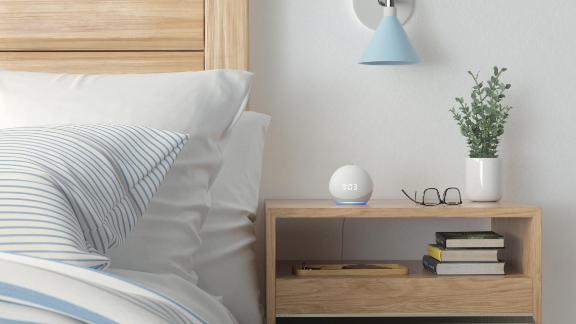 Alongside a circular and spherical fourth-generation Echo, we have the fourth-gen Echo Dot and second-gen Echo Dot with Clock. Priced at $49.99 and $59.99, respectively, these both represent a whole new design for the Echo Dot family.

Like the bigger Echo, both of these features a fabric outer shell that’s made from 100% recycled fabric. Both Dots will be available in Charcoal, Glacier White and Twilight Blue. They’re smaller than the Echo at just 12-ounces in weight and measuring in at just 4-inches tall. There’s also a single 1.6-inch front-firing driver inside. We expect the sound from Echo Dot and Dot with Clock to be on-par with previous generations. The 3rd Gen model brought big improvements to sound, so we hope that is the case again.

To communicate easily with Alexa, there are four far-field microphones onboard both of these. The AZ1 processor is inside the Echo Dot and Dot with Clock as well. The classic microphone mute and Alexa call buttons now sit on top, while the LED glowing light has been moved to the bottom of the device.

The tap-to-snooze function will be on both of these Dots as well. The LED display can also be used to show off animations for the weather, act as a time and display the temperature.

The Echo Dot at $49.99 and Echo Dot with Clock at $59.99 are both up for preorder now. Shipments will start later this year. 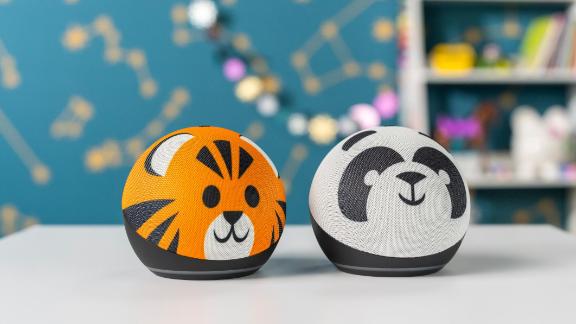 Also along for the ride is the Echo Dot Kids Edition. For starters, it matches the same design as the new Echo Dot, but is cheaper than the previous Kids Edition at just $59.99 (and available for preorder now).

You get the brand new spherical design and all the power of Alexa, while also giving you a year of Amazon Kids. Plus, the new color options are epic: You can pick from a Tiger or Panda design. They look dope and we have a feeling a lot of adults might opt for these, as well.

New to this generation is the ability to create a Kids Profile. And with this turned on, Alexa can identify if a kid is speaking to it and properly adjust its responses to be a bit more child-friendly. There’s a Reading Sidekick skill which will let Alexa read along with your child and also provide positive encouragement. The latter could be especially helpful with many kids learning from home.

The Echo Dot Kids Edition is up for preorder now at $59.99 and will ship later this year.

Gnabry can play with Lokomotiv. His coronavirus test was found to be false positive
Fans of the Premier League United against TV: instead of buying matches, they give money to charity (they collected more than 100 thousand pounds)
Ancelotti on the removal of Dinh: just ridiculous. Perhaps the talk of Pickford and Richarlison influenced the decision
Napoli won 4 of 5 Serie A matches with a score of 14:2. The Only defeat-technical from Juve
Adama Traore on oil on my hands: Now I can slip away. My opponents asked me what was going on, but I said I didn't know
Everton lost for the first time in the season, but remains first in the Premier League
Hazard was included in Real Madrid's bid for the match against Borussia Monchengladbach
Source https://us.cnn.com/2020/09/24/cnn-underscored/amazon-event-2020-echo-dot-ring-alexa/index.html

Cat seen fleeing NYC shooting that wounded 2 in a vehicle

The most intriguing player in the NBA draft: Iowa State's Tyrese Haliburton

Trump's Twitter promises to U.S. troops were good PR. But he hasn't kept them.

Does Trump stand a chance?

Polls: Biden slightly ahead in Florida and North Carolina

Pence chief of staff, 4 other aides test positive for COVID-19

4 years in, Trump has plenty of unfinished business

Sabalenka cruises past Azarenka for title at Ostrava Open

Iraqi Forces, Protesters Clash in Baghdad, Injuries on Both Sides

Buccaneers’ Antonio Brown signing is all about Tom Brady

Pence should quarantine after coronavirus exposure. He’s going to keep campaigning instead.

Nigeria's youth finds its voice with the EndSARS protest movement

The awakening of 'Generation Y' in Nigeria

Arkansas governor: Trump, all leaders need to 'be truthful and realistic'

Pelosi to run for speaker again if Democrats keep the House

Abortion on the ballot: Voters in Colorado and Louisiana consider restrictions

This Kanpur temple opens once a year on Dussehra; only to worship Ravan

Victor Davis Hanson: COVID has radically disrupted American habits and behavior. What's next for us?

Foreign students show less zeal for US since Trump took over

Want something delivered by Christmas? Order way in advance

Steelers Vs. Titans Live Stream: How To Watch NFL Games Live On CBS

The Supreme Court’s Legitimacy Is Now in Question

The Ballet Photo-Sharing Scandal Enters a New Phase in Court

The Third Wave of COVID-19 in the U.S. Is Officially Worse Than the First Two