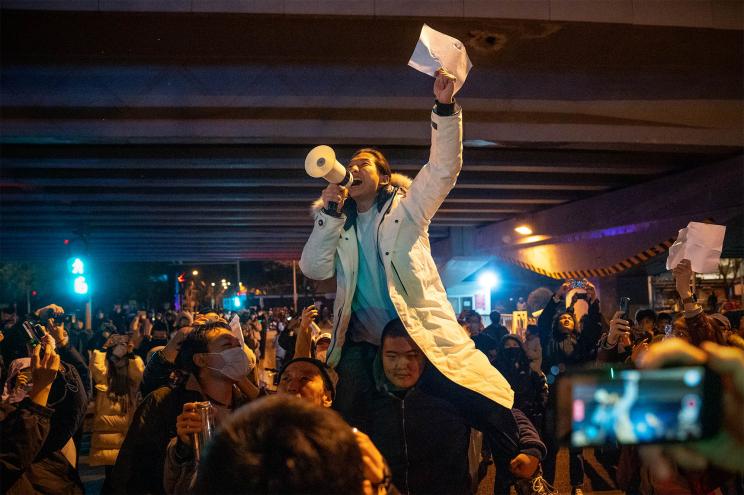 Apple has helped China surpress protests by disabling the AirDrop tool in the country. Bloomberg via Getty Images

As unrest simmered this month, the tech giant hobbled the use of its AirDrop tool in China only. The feature lets users share files on ad hoc local networks — with no way for the government to monitor it.

Now that protests are in full swing despite the wide-ranging efforts of the Chinese Communist Party to stamp them out, the dissidents are missing a reliable, crucial means of secure communication. (Info is still flowing faster than the security forces can stop it out — but they may be able trace things later.)

Apple has no moral justification for its actions. Only an economic one: China plays a massive role in the company’s supply chain and is its biggest product market outside the United States.

The company’s endless hokum about its respect for human rights? Hot air meant to appease woke bougie audiences in America and Europe.

The move also reveals the hypocrisy of Apple’s alleged threat to boot Twitter from its app store on the grounds that new CEO Elon Musk’s push to free up speech on the platform somehow violates Apple’s standards.

This is beyond the pale. Apple is willing to defend its market value by co-operating with, quite literally, the world’s most brutal regime in its efforts to crush a grassroots movement of protestors pushed to the breaking point. But allowing people to tweet things offensive to liberal pieties is worthy of its action?

The left justifies speech-policing like Apple’s by citing vague “harms” that unhindered discourse purportedly cause.

But when it comes to actual harms, i.e. the full might of China’s vast security state being brought to bear on the brave souls challenging the CCP’s power, there’s only an appalling silence.

That’s as revealing as it is troubling.