Burnt out on your go-to winter travel destinations? We bet you are. After all, it’s a new post-COVID world and that means that it’s time to shake things up.

Whether it’s for holiday family fun, glitzy New Year’s Eve shenanigans, winter sun, fun on the slopes, an urban artsy scene, immersion in nature or hiking, we’ve rounded up some alternative getaways that offer unique landscapes and easily tailored itineraries that include snow sports, arts and shopping (’tis the season!).

Time to bundle up (or strip down) and book. 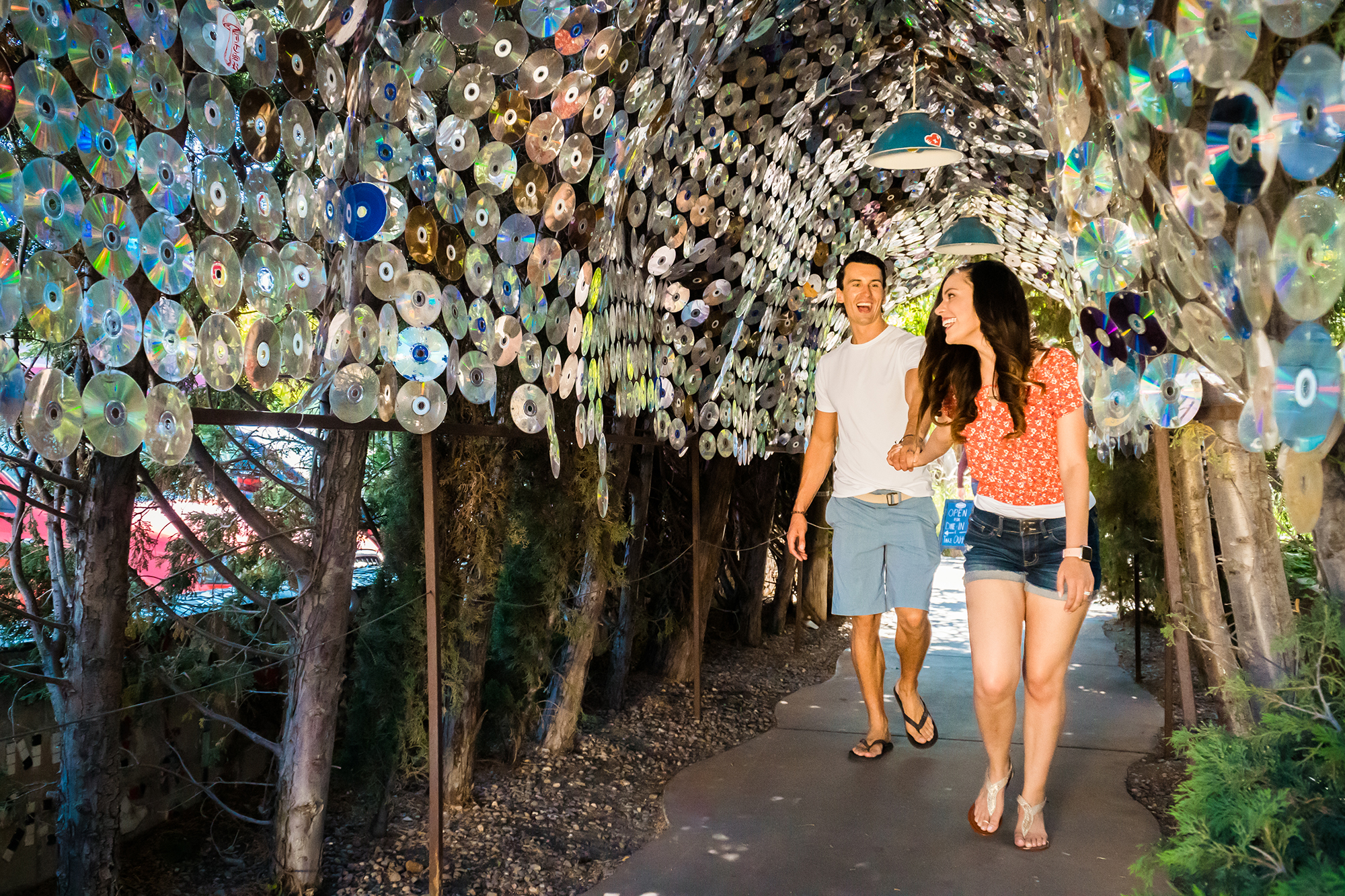 Step across Unity Bridge, which links South Coast Plaza with the Segerstrom Center for the Arts campus, and see a performance at the Segerstrom Concert Hall, Samueli Theater, Argyros Plaza and Segerstrom Hall. Adjacent, catch “A Christmas Carol” at the South Coast Repertory theater (through Dec. 25; tickets $35 to $89) and explore the exemplary modern and contemporary art collection at the just-opened Orange County Museum of Art.

Walk across Anton Boulevard to a hidden gem of the art world — the stunningly still Noguchi Garden installation where art, nature and spirit unite. For more information and to download the free Costa Mesa Art Walk Audio Tour go to Travel Costa Mesa. 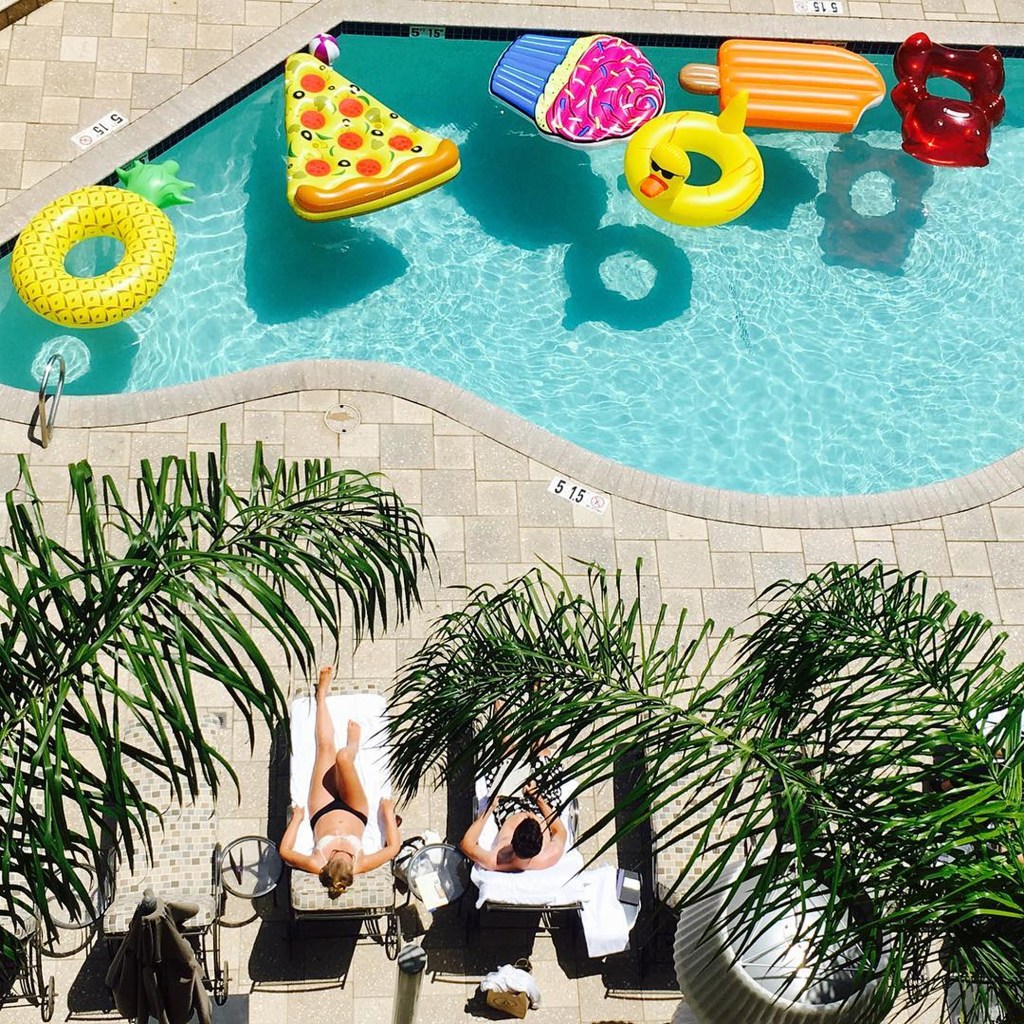 The sumptuous boutique Avenue of the Arts Costa Mesa, A Tribute Portfolio Hotel offers dining on its Silver Trumpet Restaurant and Bar’s lakeside patio. Or gather inside the restaurant, which curves along the lake’s palm tree-flecked edge (entrees: $25 to $53). 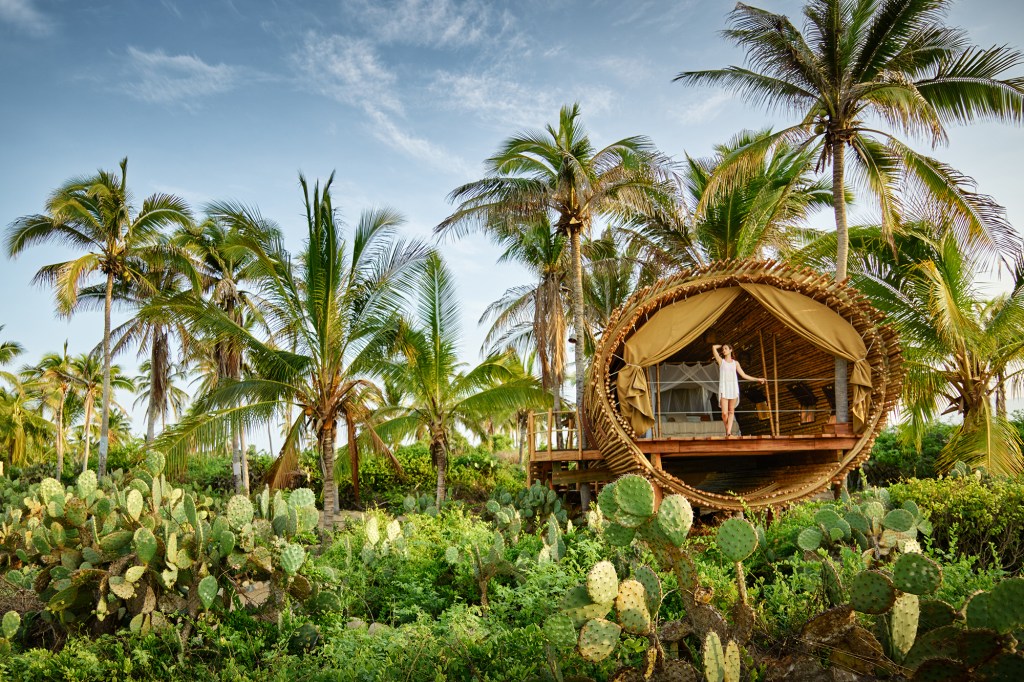 For nature and animal lovers, a stay at Playa Viva (from $207) in the Mexican state of Guerrero is the perfect base camp. Located 35 minutes south of Ixtapa-Zihuatanejo International Airport on a mile of pristine beach on Mexico’s Pacific coast, after the property opened in 2008, the owners created La Tortuga Viva, a sanctuary charged with protecting nesting golfina, green and leatherback turtles (the latter two are on the endangered species list) and their eggs from predators and poachers by maintaining the safety and integrity of their traditional nesting sites by the resort — which, given the resort took over much of the beach nesting site, was the right thing to do.

Among the resort’s many renewing activities is the opportunity to work with volunteers in aiding these amazing creatures, whose habitat and survival are increasingly threatened.

Playa Viva also arranges activities for exploring the area, such as a farm tour via ATV at the Gutierrez Family Farm ($110 per person), which includes one-on-one interaction and lunch with the family. 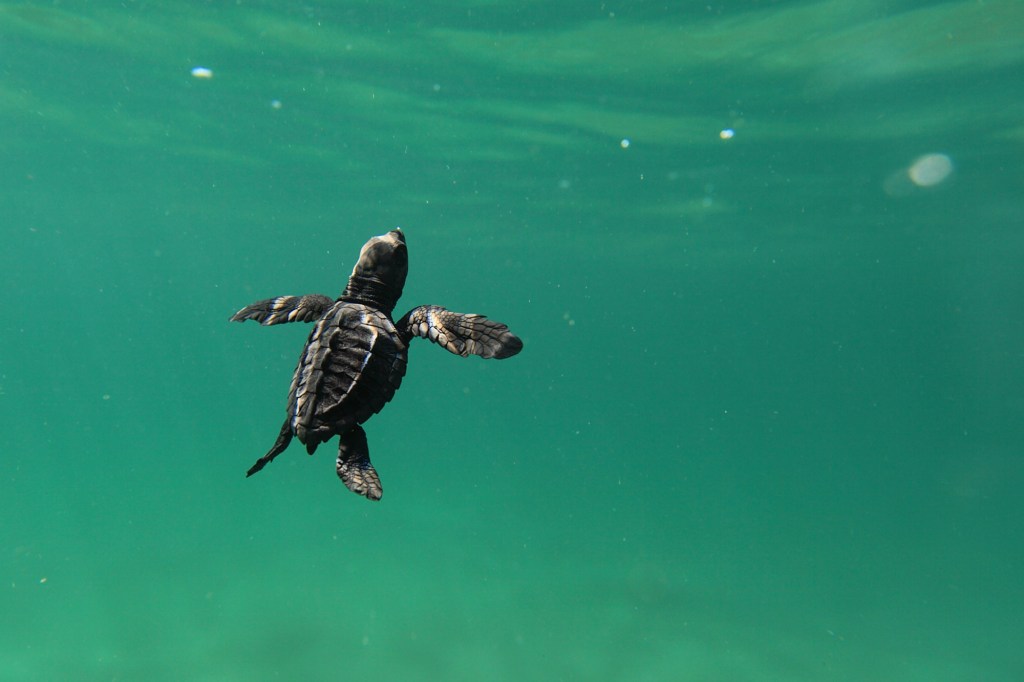 But guests might not want to venture away from Playa Viva, the founding member of the Regenerative Travel group and its six new manta ray-inspired treehouse accommodations, bringing its total eco-luxury guest accommodations to a total of 19.

New this season is a dramatic new yoga shala whose design attempts to emulate sea turtles via a lightweight bamboo roof that seemingly hovers in midair between a cluster of palms reflecting the graceful weightlessness of a swimming turtle gliding through the ocean. The school is an open-air, beachfront platform for a variety of yoga and other wellness classes, including an AIR aerial yoga retreat, Mindful Movement and Rest and Restore retreats, qigong, yoga and art therapy — and more. Playa Viva also has on-site farm-to-table dining and nearly 200 acres to explore.

Winter room rates are from $265 per person, per night, including airport ground transport (to and from ZIH), all meals (including snacks), all beverages (except bar, blended drinks, smoothies and organic coconuts), daily yoga, Wi-Fi in common area as well as tips, taxes and a donation to the Regenerative Trust. 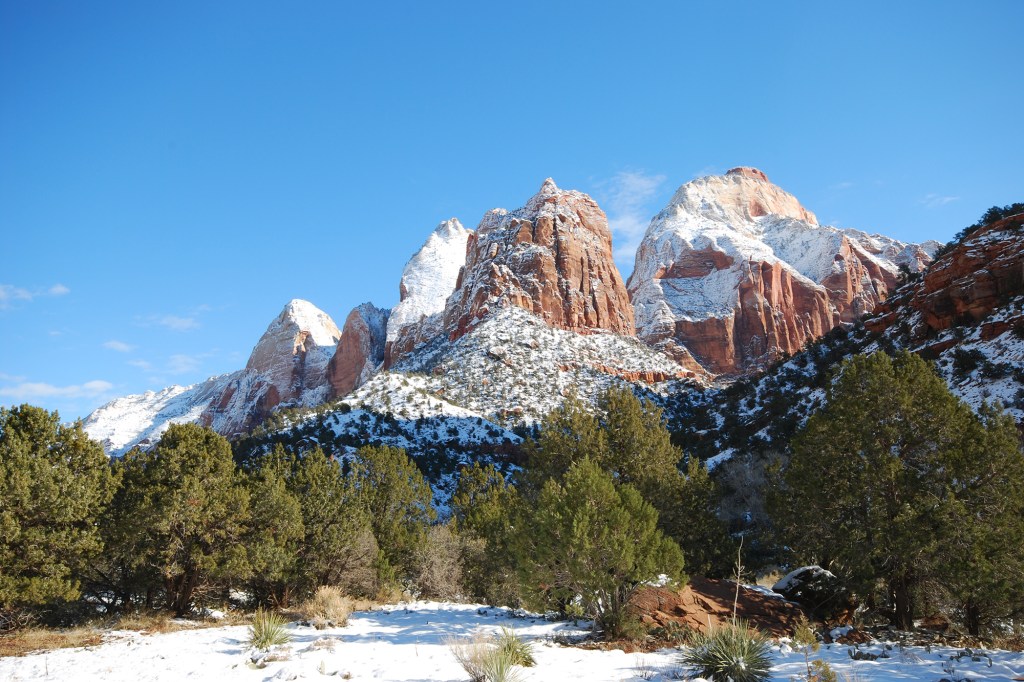 Also, permits are not needed for some of the big hiking attractions and other nearby state parks as they are in high season. For a bird’s-eye view of the ethereal Zion landscape, take a rock climbing guided tour from Utah Adventure Center Via Ferrata. The cooler temps also mean a more conformable round or two on one of Greater Zion’s 18 golf courses.

Head to Mystic Hot Springs in Monroe for a muscle soothing geothermal soak (soaking passes are $25 for adults, $12.50 for children) but make sure to bring your own towel.

Stay overnight in a cabin or bus (from $100 per night) or relax in a plush room at the pioneer-chic, western-styled boutique hotel, the Advenire, An Autograph Collection Hotel, right in downtown St. George. The hotel’s Wood.ash.rye restaurant and bar (entrees: $38 to $65) not only sources from Utah’s farms, distilleries and breweries, but transforms into a scene-y hot spot at night.

Lesser known, however, is the fact that Asheville makes a fun base for winter sports at nearby Cataloochee Ski Area and Wolf Ridge Ski Resort. It isn’t all Aspen-sized mountains, and it isn’t all an Aspen-sized scene or cost. That’s the point: low-key fun on the slopes followed by après-ski at Asheville’s varied options. Local favorite Ole Shakey’s dive bar reopened at its new downtown location (38 N. French Broad Ave.); indigenous-owned 7 Clans Brewing recently opened in south Asheville, right outside of Biltmore Village; find Cuban comfort food at Gaujiro (entrees: $12 to $18) in the River Arts District; and look out for the new food truck, the Tahini Jar (entrees: $8 to $12), which brings Middle Eastern plant-based cuisine to town. 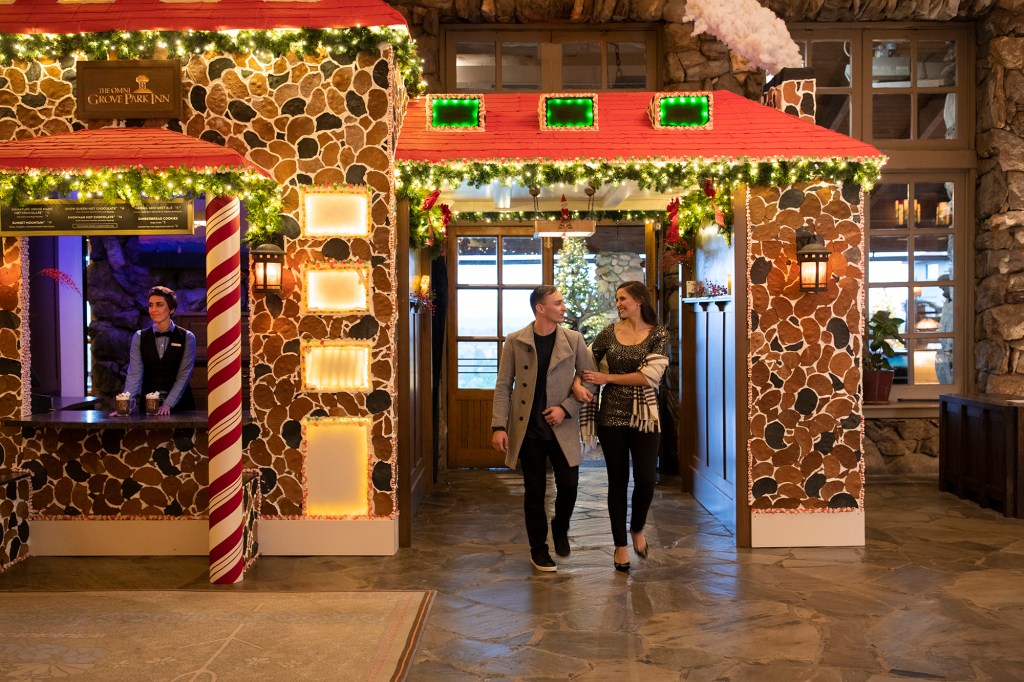 For the holiday season this year, the lavish Omni Grove Park Inn tries to outdo the Biltmore with 80 illuminated trees, and displays the edible art from its 30th Annual National Gingerbread House Competition, including a life-sized Gingerbread House in the lobby. The Gingerbread Holiday Package (Nov. 22 to Dec. 30) includes a holiday gingerbread cookie, daily breakfast, and overnight valet or garage parking. Starting rates are $439 per night for two. The Blue Ridge New Year’s Package (Dec. 26-Jan. 2, starting rate is $1,868) includes two nights of accommodations, a New Year’s Eve dinner for two at Blue Ridge, two tickets to the Sunday night comedy show and two admission wristbands to the resort’s Golden Hollywood-age themed New Year’s Eve party, dubbed “All That Glitters Is Grove Park.”

The Omni Grove Park keeps the house rocking with its winter concert series beginning with the Pop Legends Weekend (Jan. 13 to 14), which includes “Dancing Dream, a Tribute to ABBA” and “Who’s Bad, The Ultimate Michael Jackson Experience.” The Rock ’N Roll Weekend (Feb. 10 to 11) featuring “Absolute Queen, the Ultimate Tribute to Queen” and “Departure, The Journey Tribute Band” (tickets: $85 per show). 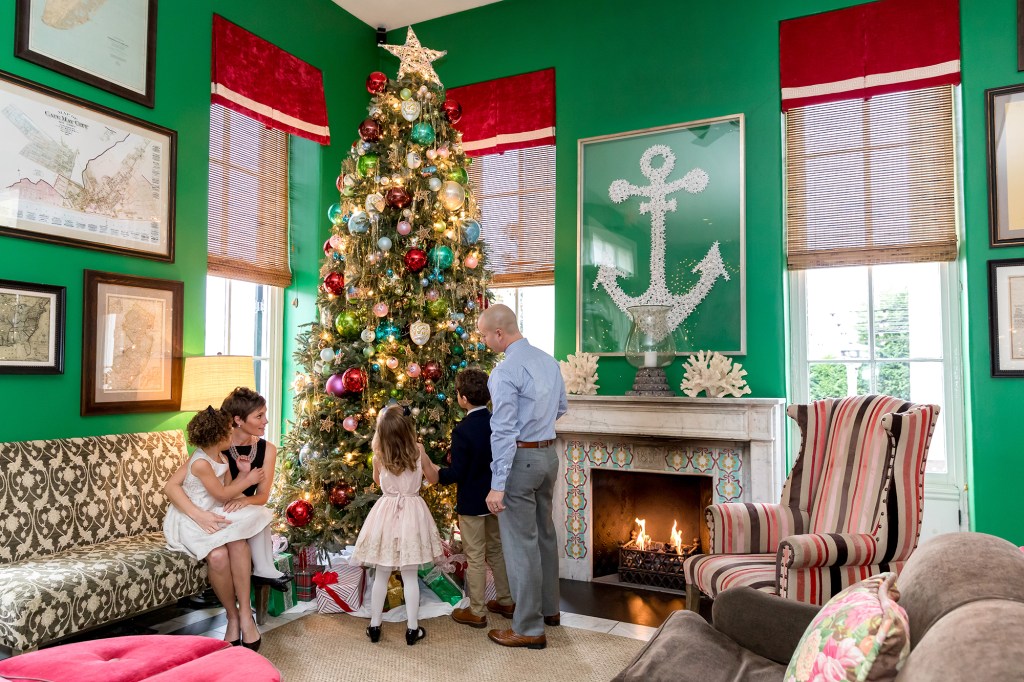 Closer to home, Cape May, that genteel Jersey Shore beach town known for its nostalgic Victorian architecture, is busy and crowded in the summer months, but settles down as a charming, cozy coastal getaway during the holidays and winter. With the town’s quaint Victorian-era vibe as a backdrop, local hotel group Cape Resorts keeps the town buzzing with Winter Wonderland (through Jan. 1), which brings Santa Claus to town, as well as a carousel and children’s Christmas train ($5 per ticket for each) and a holiday cabaret with live music ($60 for adults, $25 for kids).

Nothing caps off a winter day’s rambling like snuggling up by a fireplace and enjoying dinner in Congress Hall’s Blue Pig Tavern (entrees rare $23 to $49), or the award-winning Ebbitt Room (entrees are $33 to $71) inside sister property, the Virginia Hotel, a restored 1879 landmark building in the heart of Cape May which caters to adults only.

Winter room rates at both start at $200 per night.

How the George Floyd policing bill would reform law enforcement