Power is still out for 20 percent of Puerto Rican customers and unstable for those who have it. Water outages, partly due to the lack of electricity, continue to plague residents. Hospitals operating on backup generators because of unsteady power are running out of diesel. And the distress and frustration over the state of affairs on the island is weighing on residents.

They also worry about the imbalance in political clout: Florida — a key presidential battleground state with a teeming congressional delegation and some of the nation’s wealthiest ZIP codes — has received major federal funding after previous storms. Puerto Rico, which has no electoral votes in presidential elections and no voting representation in Congress, is only now starting to see the billions in federal dollars set aside for the island after 2017’s Hurricane Maria.

“We’re going to be put on the backburner as always,” said Gina DeJesus, an organizer with New York Communities for Change who is in Puerto Rico. “It’s Florida. It’s attached to the United States.”

The White House said Wednesday that it “remains focused on response and recovery efforts” in Puerto Rico. In a fact sheet, it said 1,000 federal workers are on the ground to support power restoration, debris removal, urban search and rescue and other response activities.

More than 43 percent of Puerto Rico’s residents live below the poverty line — a figure more than three times the U.S. average. This has complicated the recovery from Fiona, with basic necessities such as food, water and hygienic supplies difficult to obtain five years after Maria.

“Things are not OK in Puerto Rico,” said Mónica Feliú-Mójer, director of communications and science outreach for Ciencia Puerto Rico, a nonprofit that advocates for science and researchers on the island.

“I think it’s important that people don’t forget about Puerto Rico,” she said. “We need to continue having public pressure and accountability because the next five years are going to be critical for the recovery and the reconstruction efforts.” A man points to a home that was collapsed by Hurricane Fiona at Villa Esperanza in Salinas, Puerto Rico, September 21, 2022. | Alejandro Granadillo/AP Photo

Disaster relief and climate advocates are prodding the administration and Congress to do more to help the island’s residents, such as ramping up oversight to ensure that the relief and reconstruction funds set aside after Maria are spent wisely. They say it’s also important to repair the island’s fragile power grid and repeal a decades-old law that they say discriminates against island residents.

“There is a lot that Congress can do … before the next emergency hits Florida and all the attention goes away,” Frankie Miranda, president and CEO of the Hispanic Federation, said before Ian’s landfall.

A stopgap government funding measure that Congress began considering Tuesday would provide short-term flexibility for the Federal Emergency Management Agency to disburse money at a higher rate from the disaster relief fund to help respond to Fiona in Puerto Rico and severe flooding in Alaska. The funds could also be used for Ian recovery efforts.

Biden’s major-disaster declaration for Puerto Rico last week covers 100 percent of the costs of recovery actions such as debris removal and emergency protective measures there, though only for 30 days. FEMA Administrator Deanne Criswell said Tuesday that the agency did not yet have an estimate for those costs.

Now, FEMA and other federal agencies must address the wreckage from Ian, which has also lured media attention from Fiona’s impact on places such as Puerto Rico and Atlantic Canada.

Criswell said Tuesday that the agency remains committed to its Fiona response in Puerto Rico, as well as the flooding in Alaska, despite its preparations in Florida. FEMA did not make an official available for an interview.

“We remain focused on helping Puerto Rico restore critical services like power and water, and our staff remain engaged with families to help them through the application process” for individual assistance from FEMA, Criswell said during the White House press briefing Tuesday. She noted that the Biden administration added the final four municipalities in Puerto Rico to the major-disaster declaration on Tuesday, “so now the entire commonwealth has that available to them.”

But activists question why it took so long to include all of Puerto Rico’s 78 municipalities in the declaration.

The president’s Sept. 21 declaration allowed FEMA to offer direct help to individuals to pay for temporary housing and home repairs, provide low-cost loans to cover uninsured property losses and fund other storm-recovery programs for individuals and business owners. But that initial declaration covered only 55 municipalities in Puerto Rico.

“It’s very triggering,” Miranda said of the exclusion of multiple municipalities. “It is extremely frustrating and traumatic for them. The entire island is a disaster zone. There should be no areas or municipalities that should be left out of this declaration.”

Ayuda Legal Puerto Rico, which provides legal services on the island, asked Criswell in a letter Sept. 22 for the declaration to be amended to include municipalities such as Loíza, Guánica, Lajas and Cabo Rojo.

“There was no logical explanation as to why the first version of the map excluded those communities,” said Ariadna Michelle Godreau Aubert, the group’s executive director.

A senior administration official said the initial 55 municipalities were included in the Sept. 21 declaration based on damage assessments completed at that time, with additional municipalities added as assessments were finalized.

The Hispanic Federation and other nonprofit organizations participating in the disaster response also pushed for the Biden administration to waive the Jones Act to allow non-U.S. flagged ships to carry diesel fuel to Puerto Rico. The 1920 law requires that cargo being transported by water between U.S. points be shipped solely aboard vessels built in the United States, owned by U.S. citizens and registered domestically. The island is experiencing diesel shortages after Fiona that are undermining efforts to transport much-needed supplies.

Homeland Security Secretary Alejandro Mayorkas granted BP a temporary waiver Wednesday for a vessel near the island carrying 300,000 gallons of diesel fuel. DHS noted that Congress has eliminated the federal government’s authority to issue long-term comprehensive Jones Act waivers, except in specific circumstances related to military operations, with other waivers reviewed on a case-by-case basis.

The senior official said the administration is committed to doing everything within its legal authority to support the people of Puerto Rico, but can’t ignore its legal obligation to ensure each waiver request meets requirements set by Congress.

“The Administration continues to urge all petroleum refiners to help ensure Puerto Rico has adequate fuels supplies, and to use Jones Act compliant vessels whenever possible,” the White House said in the fact sheet. Godreau Aubert and other activists want a permanent repeal of the Jones Act, which they say disproportionately burdens Puerto Rico, an island that must import most of its goods. Those include more than 80 percent of its food supplies.

In addition to the physical and logistical challenges, island residents are experiencing trauma after suffering yet a second direct hit from a hurricane in five years. DeJesus said she had a breakdown due to feeling helpless, and many others on the island are expressing similar sentiments on social media.

“We really can’t look at this event without looking at both the extreme vulnerability of the power grid and the people,” said Laura Kuhl, an assistant professor at Northeastern University who has done research demonstrating an inequitable recovery in Puerto Rico after Maria. She said the “trauma” of the 2017 storm “has very much colored the experience with Hurricane Fiona.”

The federal government’s response to Fiona can be tied directly to the island’s status as a U.S. territory — or colony, as some advocates call it — and its lack of political influence on Washington, say activists and academics studying the relationship between the federal government and Puerto Rico.

They cite the ongoing impact of a 2016 law, signed by President Barack Obama, which restructured Puerto Rico’s $72 billion debt and established a financial oversight board for the territory. The board imposed austerity measures such as cuts in education funding, school closures and reductions in public sector pensions that advocates say has worsened the island’s poverty.

The panel has also privatized the publicly owned grid, which the advocates say has contributed to the power crisis.

However, activists praise the Biden administration for aspects of its pre-storm preparation and mobilization. They say the contrast to the Trump administration’s reaction to Maria — dramatized by the then-president tossing paper towels into a crowd — is notable, especially because researchers have cited the federal response to that disaster as a contributing factor to the estimated 2,975 deaths in the weeks after the 2017 storm.

“It’s night and day when it compares to the previous administration,” Miranda said. 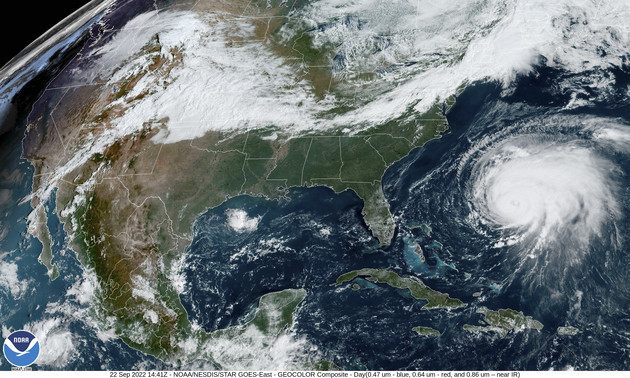 This satellite image provided by NOAA shows Hurricane Fiona in the Atlantic Ocean near Bermuda, moving north on Sept. 22, 2022. | NOAA via AP

Miranda and Kuhl also credited the Biden administration for the fact that billions of federal dollars set aside after Maria are starting to move to the island. FEMA awarded more than $32.5 billion for two grant programs that fund recovery projects, with the government in Puerto Rico and the U.S. Virgin Islands spending about $7.7 billion as of August, according to the Government Accountability Office.

The Biden administration appears to be “very aware of the legacy of distrust that is accompanying the response this time,” Kuhl said. “From what I’ve seen, there’s a lot more intentionality and recognition of that distrust. I think that’s a good start.”

But with many residents still struggling to find basic necessities, Feliú-Mójer said the federal and local governments have once again failed island residents.

“I think disaster survivors everywhere have a right to a just recovery,” Godreau Aubert said, adding that she was hoping for the best for Floridians facing Ian. “I’m just concerned that disasters are like the flavor of the month.”