ATLANTA — The important hit that eluded the Dodgers for several innings Saturday night exploded off the bat of the Braves’ Austin Riley in the bottom of the ninth, leading to a different kind of detonation — fireworks — above Truist Park.

Riley’s walk-off RBI single against Blake Treinen gave the Braves a 3-2 victory over the Dodgers in Game 1 of the NLCS. Riley had an all-around big game, with a homer in the fourth that had tied the score.

The Dodgers squandered opportunities most of the night, finishing 1-for-8 with runners in scoring position.

In the ninth, Ozzie Albies delivered a one-out bloop single off Treinen and stole second before Riley ended it. For a second straight year, the Braves are off to a series lead against the Dodgers in the NLCS. Last October, the Braves won the first two games and went ahead 3-1 in the series before the Dodgers rallied with three straight victories to win the NL pennant. 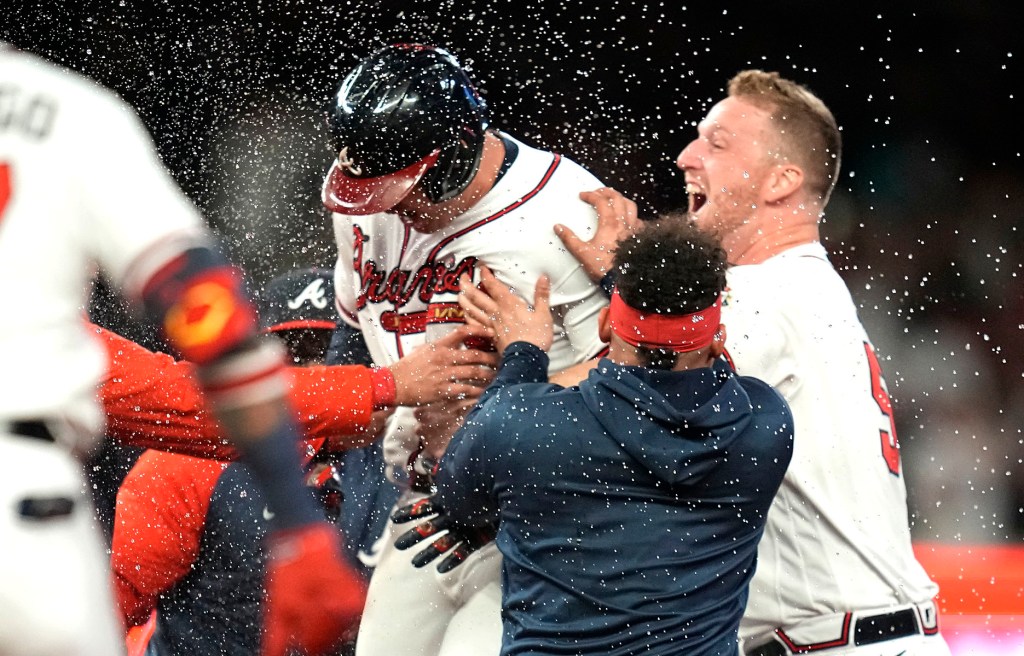 On this night, Chris Taylor’s baserunning gaffe cost the Dodgers a potential go-ahead rally in the ninth. Cody Bellinger stroked a two-out, pinch-hit single to right field, on which Taylor rounded second and hit the brakes. The throw behind Taylor to the second-base bag led to a rundown, during which he was tagged for the third out.

Taylor was left stranded at third base in the seventh after reaching on a leadoff bloop double against Tyler Matzek. Following a sacrifice bunt that moved Taylor to third, the lefty Matzek escaped by retiring Mookie Betts on a pop up and striking out Trea Turner.

The Braves got what they needed from ace Max Fried, who allowed two earned runs on eight hits with five strikeouts over six innings that consisted of 81 pitches. In his previous start this postseason, the left-hander fired six scoreless innings in Game 2 of the NLDS against the Brewers.

The Dodgers threatened to take the lead in the sixth after Justin Turner hit a leadoff single and advanced to second base on a wild pitch. But Turner was left stranded at third as leaping Albies snagged A.J. Pollock’s line drive to end the inning.

Riley blasted a two-out home run off Tony Gonsolin in the fourth that tied it 2-2. It was the second homer this postseason for Riley, who hit 33 during the regular season and became a MVP candidate, giving the Braves a formidable counterpart to Freddie Freeman (who won the award in 2020).

Will Smith homered for the Dodgers leading off the top of the inning off Fried. It marked only the third time in Fried’s career he surrendered a homer on an 0-2 pitch. The homer was Smith’s third this postseason.

Taylor’s RBI single in the second tied it 1-1. Pollock stroked a two-out double against Fried to begin the rally. Taylor’s RBI was his fourth of the postseason.

Corey Knebel was employed as the Dodgers’ opener for the second straight game — he served in that role Thursday in San Francisco — and allowed a run in the first. Eddie Rosario scored that run on a wild pitch after delivering a leadoff single, stealing second base and going to third on a groundout. Knebel was tapped to give Max Scherzer extra rest following his relief appearance in Game 5 of the NLDS (he earned the save with a scoreless ninth against the Giants).

Phil Bickford and Justin Brulhl got the Dodgers through the next 2 ¹/₃ innings before Gonsolin entered in the fourth.

Review: Boy band drama meets romance in ‘If This Gets Out’

Alabama statues to feature Hank Aaron, other Hall of Famers

US trade deficit narrows in October as exports rebound

Survivors of the Pensacola terror attack speak out

In major change, UAE workweek to be Monday through Friday

Biden to confront Putin over Ukraine in high-stakes meeting

Survivors gather to remember those lost at Pearl Harbor

New York City poised to give voting rights to noncitizens

Smollett back on stand after calling hoax claim '100% false'

Emmett Till investigation closed by feds; no new charges

Man admits to another killing just before execution

Trump gets wish in Georgia, sparks 'a political civil war'

Could others be charged, liable in Michigan school shooting?

3, including a child, injured when hair salon floor collapses

Average US price of gas drops 3 cents over 2 weeks

Jury instructions sewn up in trial over Daunte Wright death

New this week: 'Sex and the City,' Juice Wrld and Will Smith

UN delays action on Myanmar and Afghanistan's bid for seats

3 Days till Launch: How Michael Strahan is preparing for space flight

Smollett trial to resume with defense possibly calling him

Celebrity birthdays for the week of Dec. 12-18

After WTA ban, US may boycott Beijing Olympics; China in jitters, resorts to threats [details]

KFC is testing a new dipping sauce in these three cities

The biggest celebrity scandals of 2021

Priyanka Chaturvedi steps down as anchor of Sansad TV show; says Injustice has been done

Why recruitment not taking place when govt has vacancies: Varun Gandhi

Next season starts now for the Giants and the Jets

Industry 5.0 Is Coming. Here’s Why You Should Care

What the Omicron Variant Could Mean for the Medical Device Industry

Border bans due to Omicron variant 'too late': Scientists

First heavy snow forecast of the season is here: What to expect