Aww! See All the Couples Arrive on the SAG Awards Red Carpet

The 2020 SAG Awards are about to kick off tonight at the Shrine Auditorium in Los Angeles, where the industry's greatest actors will honor each other for outstanding work in television and film.

With performers like Jennifer Lopez, Brad Pitt, Lupita Nyong'o and more A-listers up for awards, we know that tonight is going to be full of big moments.

It's also the perfect date night, as seen before the show started on the red carpet!

We spotted Stranger Things' star Dacre Montgomery walking the red carpet alongside his girlfriend, Liv Pollock. The cute couple turned heads with the actor wearing an all-white suit and the model stunning in a pink, high-low dress.

Also, we saw big little fashion served up when Big Little Lies' performer Douglas Smith arrived with Tricia Travis. The former is up for an award tonight along with his Monterrey Five co-stars for Outstanding Performance by an Ensemble in a Drama Series. 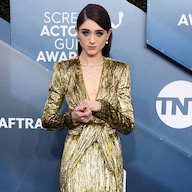 Check out the famous couples below and be sure to tune into our coverage as the show kicks off.

Animal Shelter Rakes In More Than $12,000 With Silly Pet 'Masterpieces'

'Go vote': Brad Pitt, Scarlett Johansson and other celebs urge fans to vote ahead of US election

‘All the Bright Places’ review: YA drama will make you eat your feelings away

The Coronavirus is Trump’s Time to Lead

The Democrats’ Narrative of Gloom Won’t Fly in 2020

Why Hollywood Is Better at Urban Planning Than Real Planners

Investment Advisors Worry U.S. Response To Coronavirus Is Too Little Too Late

What! Did Gauri Khan ask Shahrukh to quit acting as he is not acting in any movie now?

Hawley breaks down his coronavirus bill aimed at securing medical supply chain: 'Bring them back to US'

Report to assess removal of 4 Snake River dams for salmon

What’s Up With The Tiffany Haddish And Common Dating Rumors?

Cultural preservation among options in oil and gas plan

Mark Levin slams Schumer, Pelosi as 'the last people I want playing doctor with me or the American people'

Stephen Colbert, Trevor Noah Get Religion On The Coronavirus Outbreak

Coronavirus Fears Drive Stocks Down for 6th Day and Into Correction

China wants to get back to normal as its coronavirus case numbers ease. That could be dangerous

IN THE VANGUARD OF DIGITAL REVOLUTION

Hillary Clinton To Do Podcast Series For iHeartRadio

Tucker Carlson blasts Bernie: 'It's obvious that Sanders hates the country he seeks to lead'

Bethesda road where 2 bicyclists were struck is getting bike lanes

Arrest made in video assault of elderly San Francisco man

Rick Sutcliffe once pitched himself into fireworks hilarity

BTS cancels concerts in South Korean capital due to virus

What the Numbers Tell us About the Dangers of COVID-19

California snowpack depleted amid what could be a record-dry February