The people were angry. They’d been packed all day into the Polo Grounds — well over 70,000 of them if you counted standing room, the kids who snuck under turnstiles and the adults who’d snuck a dollar into the palms of friendly ushers.

They were used to crowds of this size on Coogan’s Bluff in the summer and fall, when the baseball Giants were making their annual push for pennants. But this was December, cold and blustery, and there wasn’t a West Point, Notre Dame or Fordham uniform to be seen. This was pro football — surely a passing fancy.

They’d come, most of them, not to cheer for the hometown Giants, who a few months earlier had been born thanks to a $500 investment by a local bookmaker named Tim Mara. The Giants were having a fine maiden season at 7-3, but hadn’t exactly captured the city’s imagination — a week earlier, a 23-0 whitewash of the Dayton Triangles had barely drawn 18,000 to the Upper Manhattan grounds.

But this day — Dec. 6, 1925 — was different. The Chicago Bears, one of the NFL’s charter franchises, was in town. And on the roster was the most famous football player of all, Red Grange — the Galloping Ghost. Grange had played sparingly the first three quarters, throwing one pass, catching two and making a few short runs before retreating to the bench. And the crowd voiced its displeasure.

“We want Grange!” they shouted in unison, all for an opposing player. 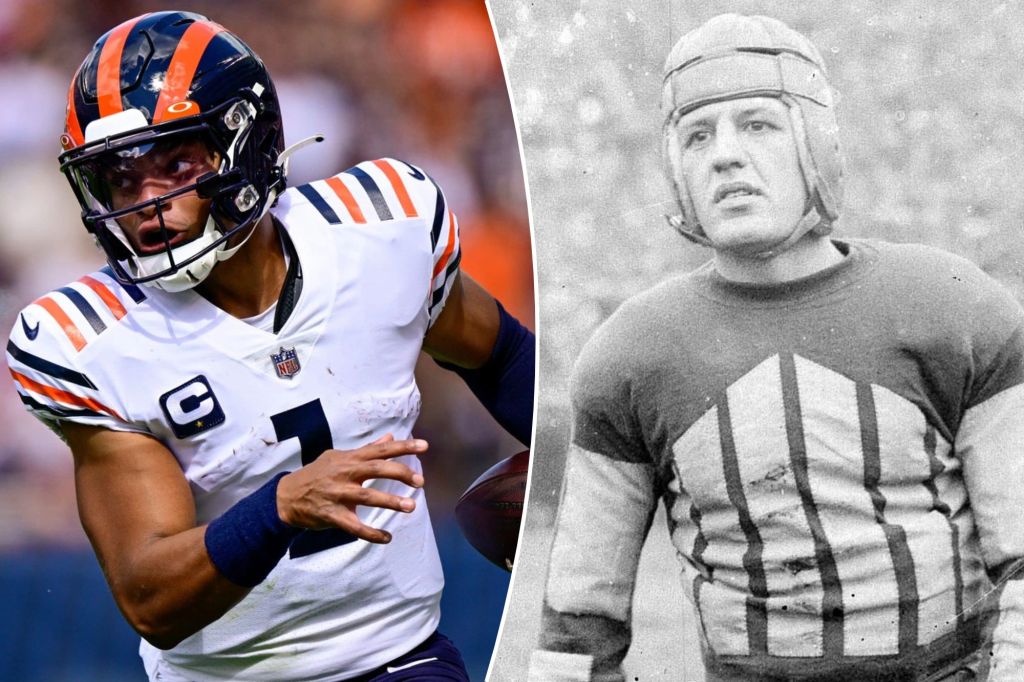 Then, Bears coach George Halas acceded to their wishes early in the fourth quarter, sending Grange back into the game. The crowd roared. And soon enough, it would nearly implode: Mike Palm, the Giants’ quarterback, dropped to pass, his team trailing 12-7. He flung the ball from the shadow of his end zone.

Right into the waiting arms of Harold Edward Grange, who intercepted it. And the ghost galloped 35 yards, all the way to the house, all the while 70,000-plus New York fans were covering him in thunder. The Bears led 19-7. The game ended that way.

And pro football in New York City had officially — and permanently — arrived.

Ninety-seven years later, we can assumed that no Bear will receive anything close to such adulation at MetLife Stadium when the Giants and Bears renew their rivalry for the 63rd time, dating to that seminal game of Dec. 6, 1925. The Giants and Bears have met six times for the NFL Championship, the Bears winning four. The Giants pulled off the “sneakers game” coup to win in 1934. Sean Landeta whiffed on a playoff punt in January 1986.

There is history here aplenty.

What we have Sunday are two teams that believe they are better than almost anyone outside of their respective team headquarters believes. They are both 2-1. They both have surprising upsets on their résumés already — the Giants stunning Tennessee in Week 1 at almost exactly the same time the Bears were beating the 49ers.

One of these teams will emerge from the game at 3-1 and will instantly assume the mantel of the Surprise Team in the league for the season’s first quadrant. For the Giants, that would mean another small step on the pathway to legitimacy.

It will be especially interesting to see how the Giants’ defense — huge in Weeks 1 and 2, somewhat humbled in Week 3 — is able to control the Bears. Justin Fields will show you one or two reasons every week why he can be one of the most intriguing quarterbacks in the league, but the Bears keep his throws to a minimum. They want to ground-and-pound you to a point at which they can then possibly allow Fields to astound you.

(Apologies to Clyde Frazier right there.)

“Fields could be, for the younger crowd, a Cam Newton-type, or for us older guys, a Randall Cunningham-type,” defensive coordinator Wink Martindale said. “And their backs are explosive backs who run hard, old-school hard. That offensive line, they work well together, especially in the run game.”

Old-school is the phrase of the day when the Bears and the Giants meet up. Expect that today. But don’t expect the locals to roar for Fields as they once did for Red Grange. Nothing is quite that old-school.