The scale of devastation from Tuesday's Beirut blast can be seen in new satellite images that provide a sobering perspective of the pair of explosions that killed more than 100 people, injured 4,000 others and leveled several warehouses and buildings in the surrounding area.

The new pictures from ISI Imagesat International show massive damage to the city's industrial waterfront following the blasts that erupted next to the Beirut Port Silos. 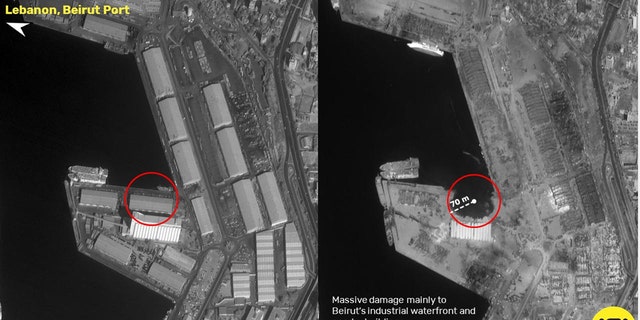 Hospitals were also damaged and windows shattered miles away as the shockwave from the explosion moved from the industrial waterfront to the city's residential areas and shopping districts. The blast also changed the shoreline in the port, according to local reports.

Initially, President Trump claimed a bomb might have gone off in the city -- a statement that was contradicted by U.S. military officials as well as those in Lebanon.

The investigation into the Beirut blast seemed to show years of neglect over the storage of highly explosive materials, an official source familiar with the findings told Reuters.

Boaz Hayoun, owner of the Tamar Group, an Israeli firm that works closely with the Israeli government on safety and certification issues involving explosives, told The Associated Press that before the big explosion, in the center of the fire, "you can see sparks, you can hear sounds like popcorn and you can hear whistles. This is very specific behavior of fireworks, the visuals, the sounds, and the transformation from a slow burn to a massive explosion."

The blast, based on the crater and glass windows being blown out a distance away, exploded with the force equivalent to detonating at least 2.2 kilotons of TNT, Sim Tack, an analyst and weapons expert at the Texas-based private intelligence firm Stratfor, said. 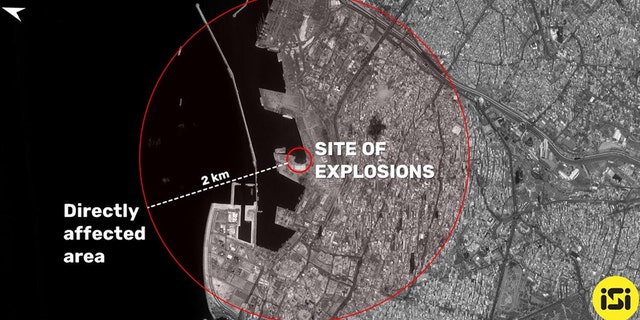 Tuesday's explosion was the most powerful ever felt in Beirut, a city still scarred by a civil war that started three decades ago and crippled by a financial crisis rooted in years of corruption and economic mismanagement.

The head of Beirut Port, as well as the head of customs, said Wednesday that several attempts had been made asking for the dangerous materials involved in the blast to be removed but that no action by the judiciary had been taken.

Fireworks and 2,700 tons of ammonium nitrate confiscated from a cargo ship in 2014 are believed to have been the fuel that ignited the massive explosion.

Tuesday's blast also damaged a UNIFIL maritime task force ship that was docked at the port. A few UNIFIL naval peacekeepers were also injured, some of them seriously, according to a statement from the United Nations Interim Force in Lebanon.

Maccabi entered the Champions League without 11 players due to covid. UEFA allows you to play if there are 13 players from the application
Ole Gunnar Solskjaer: De Gea saved us for years, Henderson did the same today. Lingard played well
The semed said goodbye to Barcelona: Thank you for the opportunity to realize the dream. Eternally grateful
Juve have leased Morata from Atletico for 10 million euros with the right to buy out for 45 million
Barcelona and Atletico have agreed a move for Suarez (Fabrizio Romano)
At the 1950 world Cup, Amateurs from the United States beat England. The coach of the Americans compared their players to sheep, and the author of the winning goal went missing
Dan Henderson made his debut for Manchester United at the age of 23. He made 141 appearances on loan
Source https://www.foxnews.com/world/new-satellite-images-show-devastation-from-beirut-explosions

Cult leader claiming to be reincarnation of Jesus arrested in Russia

Facebook has more users in India than anywhere else. It's now dealing with a hate speech crisis

Yankees get back on track with dominant win over Blue Jays

Michael B. Jordan on How Justice Is Central to His Work: ‘It Makes Me Want to Work Harder’

Kaitlyn Bristowe Pushes Past Ankle Injury on Dancing With the Stars

CNN's April Ryan to Kamala Harris: It gives me 'chills' that I could call you 'Madame VP' in January

Japan's hafu stars are celebrated. But some mixed-race people say they feel like foreigners in their own country

Review: Bill Murray and Sofia Coppola reunite in 'On the Rocks,' with mixed results

White House liaisons being removed from their jobs and replaced

A. Scott Bolden: Confirmation of Supreme Court justice must wait until after presidential inauguration

Brewers rally in 7th, bolster chances with 3-2 win over Reds

UK gardener harvests potato resembling her dog: 'This has cheered us all up massively'

Wilson has 29 points, 7 blocks; Aces even series with Sun

Cook County Health officials send Board of Commissioners $3.4B budget plan as pandemic shortfall looms: ‘We’re looking at a compromise here, no question’

Gov. Pritzker puts Illinois National Guard ‘in a state of readiness’ ahead of Kentucky announcement in Breonna Taylor case

What Joe Judge did for Saquon Barkley stunned former Giants

China, the World’s Top Emitter, Aims to Go Carbon-Neutral by 2060

‘She’s telling us how to run our country’: Trump again goes after Ilhan Omar’s Somali roots

A bubble of self-delusion in Washington

Analysis: A bubble of self-delusion in Washington

Cincinnati professor on leave after calling COVID-19 the 'Chinese virus'

Even after a successful claim he was tortured into confessing by Jon Burge, man faces a third trial in slaying of 2 Chicago police officers