Belarus Is Under Attack

The opposition leader, fearing for her safety and her family, has been forced to flee. Peaceful protests have been met with violence: Hundreds wounded, two dead. People have disappeared into detention, violently pulled off the streets. And every night around 6 p.m., before the most brutal police violence begins, the internet is shut down. Belarus is under attack from its own government.

What’s happening in my country didn’t start on Sunday, when a blatantly rigged election returned President Alexander Lukashenko, the country’s autocratic ruler of 26 years, to power — and provoked a wave of resistance. No: Belarusians have lived under state violence for decades. But in its intensity and its brutality, in its effort to punish the Belarusian people for dreaming of something better, the repression marks a new low in the country’s history.

Rigged elections are nothing new to Belarus; Mr. Lukashenko could not have prospered so long without them. But this time the fraud — the official results had Mr. Lukashenko, who has faced increasing discontent about his rule, with close to 80 percent of the vote — was so offensive, so humiliating, that Belarusians experienced it as dehumanizing. To reclaim their dignity, they took to the streets.

Peaceful and unarmed, they do so with only their own bodies. People wear white ribbons (a symbol of support for the opposition); women, dressed in white, carry flowers and sing lullabies. At night, people blink lights on and off in their apartments. In videos published on Telegram channels, whole neighborhoods of apartment blocks appear blinking like a giant swarm of fireflies. “Zyve Belarus!” (“Long live Belarus!”), a voice shouts from a balcony. “Zyve!” (“Indeed, it lives!”), strangers shout back through the darkness. 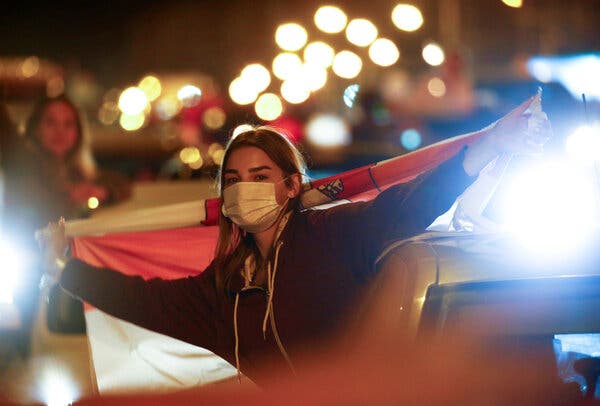 At night, I lie in my bed in Ithaca, N.Y., trying to sleep. But my thoughts are back in Belarus, which I left as a young woman and where I regularly return. I get up and message my friends in Belarus: It’s already morning there. I’m still in New York, but my body now lives on Belarusian time.

The protests that have rolled nightly across the country since Sunday are unique. There is no leadership, no control center; even basic public coordination is difficult because phone and internet services are off or unreliable. In a nation left without a leader, everyone stands up to take responsibility.

People use Telegram to mark their location, request help and warn others of police ambush. In self-organized droves, they are walking out into city streets as if to say: I exist, I have dignity, I have a voice and I count. What is happening in Belarus is a mass improvisation in dignity, a movement against dehumanization and invisibility.

With the internet down, information from the country is fragmented and unchecked. But what it shows, in horrifying short videos recorded on cellphones and circulated on Telegram, is brutality and violence unleashed by the police and special forces on a terrifying scale. Rubber bullets and stun grenades launched into peaceful crowds. Shots fired into people’s backs. Truncheons wielded over defenseless demonstrators. Journalists shot at and beaten. Belarusians have never before been attacked by their own troops so brutally, so mercilessly.

It’s not just protesters, either. People are being detained in great numbers for the offense of walking down the street. Cars are stopped by the police at random, their drivers dragged out, beaten and arrested. “Go home!” the riot police scream in one video. “But we are home!” a voice screams back.

Around 6,700 people have been detained, according to the authorities — a number so staggeringly high Michelle Bachelet, the United Nations human rights chief, said it suggested a “clear violation of international human rights standards.” And once detained, people face horrors. Released protesters describe 50 men kept to a single cell, denied food and all communication with the outside, and subjected to severe beatings. There is talk of torture.

The viciousness of the crackdown, counterintuitively, shows the power of the Belarusian people. Their very existence keeps the state in fear. Every passer-by, to the riot police, is a protester; every citizen, to Mr. Lukashenko’s regime, is a threat. (The approach is ultimately futile: Early Friday, under increasing pressure and after another day of peaceful protests, the government promised to release those detained. Whether anyone will answer for the sadistic treatment of the prisoners is unknown.)

Resistance comes readily to Belarusians. After all, during World War II, many of them organized into one of the largest resistance movements in Europe. But there’s also a rhythm to the defiance. Words are ripped into syllables: “Sva-bo-da!” (“Freedom”), “Ve-rym-Mo-zham-Pie-ra-mo-zham!” (“We believe we can, we will win”) and into the masked faces of police officers, as they brutalize their own people, “Mi-li-cy-ja-Z-Naro-dam!” (“The police is on the people’s side”).

So who is on our side? Are you, world? Do you feel any empathy for people beaten in plain daylight for walking to the store, for people attacked with truncheons? Do you think that Belarusians should be sanguine when the ambulance that arrives to tend to the wounded spills out riot police instead of doctors? For how long is it OK to go on without being able to locate your family and friends in one of Belarus’s many prisons, where officials shove desperate people away from the doors like stray dogs?

Last year, Mr. Lukashenko called Belarusians lazy “narodets” — a people not worthy to be called a nation. But Belarusians, who have always lived inside the reactor of history, know differently. And over the last four days, in love and solidarity with each other, they have shown their authoritarian ruler how greatly he is mistaken.

Valzhyna Mort is a poet and the author of the forthcoming “Music for the Dead and Resurrected.” Born in Minsk, Belarus, she teaches at Cornell University.

The Times is committed to publishing a diversity of letters to the editor. We’d like to hear what you think about this or any of our articles. Here are some tips. And here’s our email: letters@nytimes.com.

Liverpool will buy Jota for 41 million pounds. Wolverhampton will pay up to 13.5 million for Hoover
8 is Bavaria's favorite number. Now she beat Schalke: Gnabry scored a hat-trick, Sane scored 1+2, Lewandowski came up with an assist by rabona
Liverpool agreed a 5-year contract with Jota. The transfer amount could be 43 million euros
I left everything and went to the other side of the world for my favorite team. The heartwarming story of a Norwegian fan in love with Santos
Lewandowski scored in the 1st round of the Bundesliga in 7 seasons and repeated the championship record
Gnabry scored a hat-trick against Schalke
Lewandowski scored for Schalke in their 10th Bundesliga game in a row. This is a League record
Source https://www.nytimes.com/2020/08/14/opinion/belarus-protests-violence.html

Can Mitch McConnell Get the Votes to Seize Ginsburg’s Seat?

Samsung Galaxy M51 Review: One for the long haul

Americans Mourn the Passing of Ruth Bader Ginsburg at 87

What does an Emmy drive-through festival look like? Scroll to see our photos

Top Judiciary Dem Feinstein: RBG successor should 'under no circumstances' be confirmed before inauguration

David Ortiz admits he had Covid-19, but was asymptomatic

Biden: Senate Shouldn't Take Up Supreme Court Vacancy Until After The Election

If Republicans fill Ginsburg's seat, a President Biden would have no choice but to expand the court

After Ruth Bader Ginsburg's death, what's next for the Supreme Court?

Ruth Bader Ginsburg tributes: 'There will never be another like her'

Homeland Security whistleblower not yet ready to testify

'She led an amazing life': Trump pays tribute to Ginsburg

Rep. Engel agrees to drop Pompeo subpoena now that he has Biden documents

3 Tropical Storms Formed In About 6 Hours

Ginsburg's last wish was to 'not be replaced until a new president is installed': report

Oregon is trying a furry approach to firefighting: goats

Pelosi: Ruth Bader Ginsburg's death is 'an incalculable loss for our democracy'

Herd immunity is a fantasy

Bill Barr’s critics are wrong — again, and other commentary

Trump Has Detailed His Supreme Court List. Will Biden Release One?

Donald Trump Tells Reporters He Hadn’t Heard Of Ruth Bader Ginsburg’s Death: “You Are Telling Me Now For The First Time”

Malcolm and Slattery: Ruth Bader Ginsburg was a lioness of the law

Trump Wants to Cripple TikTok and WeChat. Why?

Trump at Minnesota rally: Biden will turn state into a 'refugee camp'

Television Academy And Emmy Nominees Will Pledge $2.8M To No Kid Hungry Charity

Trump reacts to Ginsburg's death: 'An amazing woman who led an amazing life'

McConnell: Senate will vote for Trump's pick to replace Ginsburg

Ruth Bader Ginsburg’s death is a tragedy. The Supreme Court’s rules made it a political crisis.

Trying to go 2 for 2 as senior, Furyk leads at Pebble Beach

Reed takes the lead as the real US Open gets started

Some of Ruth Bader Ginsburg’s most memorable quotes

Justice Ginsburg's Death Sets Up Political Battle In The Senate

‘RBG’ Directors On How Ruth Bader Ginsburg Wanted To Be Remembered

Good news: That New York pork isn’t going out the door after all

White House announces Trump will nominate a new justice, McConnell announces there will be a vote

Forbidden City at 600: How China's imperial palace survived against the odds