'Look at India, it's air is filthy': Trump during final presidential debate

Three hours of heavy rains, measuring more than 75 mm, across Bengaluru on Friday saw retaining walls of storm water drains getting breached or partly collapsing at many places, flooding many low-lying areas and throwing normal life out of gear.

A portion of the retaining wall of the storm water drain collapsed near Dattatreya Layout in Rajarajeshwari Nagar, resulting in water entering houses in the area. 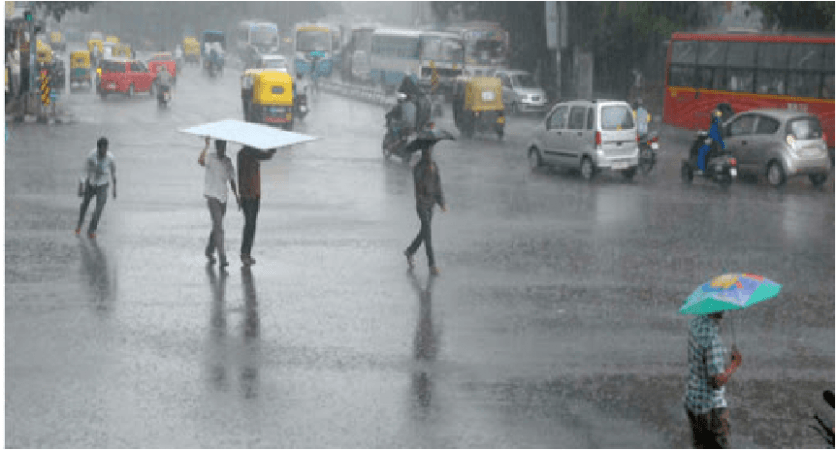 As the water mixed with slush, sewerage and garbage gushed into their homes, several residents had a harrowing experience, as they were kept busy flushing out the water out, while struggling to keep their electrical appliances, ration and clothes in a safe place.

Besides this, vehicular movement too was badly affected, resulting in traffic snarls in key junctions across the Central Business district.

With several reports of floods in low-lying areas and traffic snarls, Revenue Minister R. Ashoka was himself monitoring the relief works.

Bruhat Bengaluru Mahanagara Palike Commissioner, N. Manjunath Prasada also monitored relief work through the central control room in the civic body's office. Along with BBMP workers, the Fire and Police department personnel joined hands to clear traffic across the city, with many vehicles breaking down due to the heavy rain adding to the traffic woes.

However at some places, even the police threw up their hands in despair due to bumper to bumper traffic with many auto-rickshaws breaking down adding to chaos.

Bengaluru is not unused to floods as for the last two decades, several Municipal Commissioners as well as elected representatives, including Deputy Chief Minister Ashwath Narayana himself two days ago, obliquely conceding that encroachments on the storm water drains were a major contributing factor for such floods.

Meanwhile the India Meteorological Department has issued yellow alert for Bengaluru for next two days, which means the city will be receiving anywhere between 64 mm to 115 mm rain.

Davis is named the best player in Canada in 2020
Iker Casillas: Zidane is great. He has earned the right to coach Real Madrid
Gattuso on Napoli: Almost lost to AZ, although they could have reached the playoffs
Mikel Arteta: Arsenal in the Premier League are not as formidable in attack as in the Europa League
Roma have 4 wins in 5 rounds of the Eurocup season for the first time
Soboslai could move to Leipzig in the winter if Salzburg fail to qualify for the Champions League play-offs. The midfielder is also of Interest to Bayern
Bale has 200 career goals. He hasn't scored in European competition for 2 years
Source https://www.ibtimes.co.in/bengaluru-rains-city-receives-widespread-rain-normal-life-hit-yellow-alert-sounded-829637

Asia Has Beaten Back Each Wave of COVID-19. But This Surge Could Be Different

It's That Time Of Year: Fox News' 'War On Christmas' Gets A Pandemic Twist

This Time, a Cartoon Depiction of Naomi Osaka Is More True to Life

LIVE UPDATES: Trump refuses to say he has confidence in Barr

'No fake news:' Biden and Harris sit down for a 'very normal' interview with Jake Tapper

Trump doubles down on defense bill veto threat over Section 230

E.U. Privacy Rule Would Rein In the Hunt for Online Child Sex Abuse

Jobs report will show how much pandemic is squeezing hiring

House passes bill that would ban most big cat ownership

Arkansas police officer is first in the state to die in the line of duty from Covid-19, department says

Heidi Klum says daughter Leni, 16, has an interest in modeling and hosting TV

Michigan restaurateur defies state order, stays open: 'You can only be backed into the corner so far'

Biden: Trump attending inauguration is 'of consequence' to the country

Harris on her working relationship with Biden: 'We are full partners in this process'

Tucker Carlson: The Christmas lockdowns are here -- but not for those who ordered them