Washington — President-elect Joe Biden formally introduced Tuesday the officials who will lead his economic team, which is poised to take the helm of the federal government as the nation grapples with the economic fallout of the coronavirus pandemic.

Joined in Wilmington, Delaware, by each of the six future nominees and appointees as well as Vice President-elect Kamala Harris, Mr. Biden heralded his new team as "ground-breaking Americans who come from different backgrounds, but share my core vision for economic relief."

"A first-rate team that's going to get us through this ongoing economic crisis and help us build the economy back, not just build it back, but build it back better than before," he said.

Mr. Biden said his economic advisers will play a critical role in shaping a package he intends to introduce in the next Congress that will address the multitude of issues facing the nation, including the economic and coronavirus crises.

"We're going to create a recovery for everybody, for all. We're going to get this economy moving again," he said. "Our message to everybody struggling right now is help is on the way."

Still, Mr. Biden urged Congress to pass a relief package to address the urgent needs stemming from the ongoing pandemic, but acknowledged it's "likely to be at best just a start," as it will come during the lame-duck session. 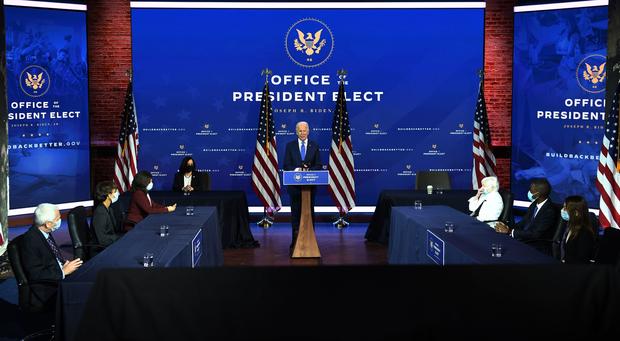 "This team will always be there for you and your families. This is a family-oriented team," the president-elect said. "We have to make sure ordinary people do well because when given a chance, they never ever ever let the country down."

The president-elect's transition team announced the key members who will be tasked with shaping the new Biden administration's economic agenda Monday. If approved by the Senate, several of Mr. Biden's intended nominees would break barriers, including Janet Yellen, selected for Treasury secretary, Wally Adeyemo, tapped as deputy secretary of the Treasury, and Neera Tanden, picked to helm the Office of Management and Budget.

Noting that Yellen's nomination would be historic, Mr. Biden joked that he may need to ask Lin-Manuel Miranda, who created the Broadway musical "Hamilton" about the life of Alexander Hamilton, the first treasury secretary, to create a new musical about the first woman to helm the department.

The other top nominees and appointees who will round out Mr. Biden's economic team are Cecilia Rouse, nominee for Chair of the Council of Economic Advisers, and Jared Bernstein and Heather Boushey, both named as members of the council.

If confirmed by the Senate, Rouse would be the first woman of color to lead the White House Council of Economic Advisers.

While Yellen's expected nomination as treasury secretary has been largely well received, Mr. Biden's decision to pick Tanden was criticized by Republicans on Capitol Hill, who take issue with her past clashes with GOP lawmakers on social media and background leading the Center for American Progress, a liberal think tank.

Republican Senator John Cornyn of Texas called Tanden's nomination "radioactive," while GOP Senator John Thune of South Dakota told reporters "she's been pretty partisan in her some of her previous positions, and in many cases, with respect to Republican senators who would have to vote on her potential nomination."

Whether Tanden is approved as Mr. Biden's budget chief next year could depend on the outcome of two runoff elections in Georgia, which will determine which party controls the Senate.

The president-elect urged the Senate to hold prompt confirmation hearings for his nominees and said he hopes "we will be able to work across the aisle in good faith and move forward as one country."

Once Mr. Biden is sworn in January 20, his economic team will swiftly be tasked with addressing the economic havoc wrought by the coronavirus crisis, which has left millions of Americans out of work, small businesses struggling and city and state governments facing budget shortfalls due to declines in revenue.

Yellen called for urgency in addressing the economic challenges from the pandemic, warning "inaction will produce a self-reinforcing downturn, causing yet more devastation."

Jovic scored a double in the 1st game for Eintracht after returning. Almost a year has passed since the last goal for Real Madrid
Klopp pro 0:0 with Manchester United: We didn't score, and that's the most important thing in football. This is not the result we wanted
Henderson on 0:0 with Manchester United: Liverpool disappointed. We were better and did enough to win
Liverpool do not win 4 matches in the Premier League in a row - the worst series in 4 years
United withstood Liverpool and remained first: again zeros in the top match. But City is now leading the way in terms of lost money
Maguire on 0:0 with Liverpool: Manchester United's moments were better. We would have won on another day
Solskjaer about 0:0 with Liverpool: I'm upset, but a point is fine if Manchester United win in the next round
Source https://www.cbsnews.com/news/biden-economic-team-announcement-watch-live-stream-today-2020-12-01/

People want the Covid-19 vaccine, but the government is failing

Biden To Roll Back Trump Admin. Decisions On Day One

Darlene Love, Singer of Many Phil Spector Classics, Remembers: ‘He Wanted to Control My Talent’

Trump must be barred from post-presidency intelligence briefings: Schiff

Jordan Among First to Vaccinate UN-Registered Refugees it Hosts

Trump Leaving Office With Lowest Approval Rating of His Presidency

GOP Lawmaker: Trump ‘Put All of Our Lives at Risk’ With His Speech Before the Capitol Riot

Why Trump is still a problem for the GOP establishment

The police arrested a woman who they said impersonated an officer at an inauguration checkpoint.

Kamala Harris To Be Sworn In By Justice Sonia Sotomayor

‘What you see is what you get:’ Forecaster says as steady snowfall is expected to continue most of Sunday

Our Favorite Under $100 Finds From Coach's MLK Day Sale

Mesut Ozil confirms he is leaving Arsenal for Fenerbahce

Man who drove up steps of Wisconsin Capitol was intoxicated, not politically motivated, authorities say

Star weight loss influencer, 35, weds stepson, 21, and has his baby

Alexey Navalny returns to Russia five months after being poisoned

Navalny Returns to Moscow, Despite Threat of Arrest

Fauci: New COVID-19 vaccines could be ‘weeks away’ from possible approval

Tim Cook: Why I kicked Parler off Apple's App Store

Browns-Chiefs: How to watch AFC Divisional round game, time, weather

Chiefs Vs. Browns Live Stream: How To Watch The Chiefs-Browns Game Live

What Time Does ‘Batwoman’ Season 2 Premiere on The CW?