Our NFL betting writer offers his best betting picks and predictions for the matchup between the Chiefs and Bengals scheduled in Cincinnati for Sunday at 4:25 p.m. ET on CBS.

This is a rematch of last season’s AFC Championship Game when Cincinnati stunned Kansas City 27-24 in overtime to reach the Super Bowl. The Chiefs also lost a 34-31 shootout at Cincy in Week 17 last season. Freak occurrence? The Bengals have won six of the past seven meetings with the Chiefs.

Chiefs vs. Bengals predictions and analysis

Kansas City’s Patrick Mahomes leads the NFL in passing yardage (3,585) and touchdown passes (29) and is considered the league’s top quarterback. But Joe Burrow (3,160 yards, 23 TDs) is no slouch and he came out the winner in both of last season’s matchups with Mahomes.

The defending AFC champions will have a pumped-up crowd and the intangibles of owning the Chiefs on their side in the latest meeting. Cincinnati also has overcome an 0-2 start to win seven of its last nine games, including three straight.

Burrow is a quarterback who instills confidence in the troops and the Bengals’ late run last season has carried over to this campaign. And Burrow has been on his game — since throwing four interceptions in a season-opening loss to the Pittsburgh Steelers, he has thrown just four over the past 10 games.

The health of running back Joe Mixon (concussion) is a concern but Cincinnati is hoping he won’t miss a second straight game. Star wideout Ja’Marr Chase (hip) is expected back after missing four straight games.

The Bengals have scored 30 or more points in four of the past six games so they can compete with the Chiefs in a shootout and probably hold the edge in a lower scoring affair. Getting points in The Jungle? Yes, please.

Kansas City has recorded three double-digit victories during a five-game winning streak while looking like the best team in the AFC. The Chiefs certainly are motivated to avenge last season’s AFC title game loss, a setback that still haunts Mahomes, who performed well in the Week 17 defeat last season, too.

Mahomes enters on a streak of six straight 300-yard games, and has topped 400 in two of them. Kansas City has scored under 30 points in three of their past four games and recorded three-point wins against the Tennessee Titans and Los Angeles Chargers.

Star tight end Travis Kelce always enjoys going back to Cincinnati, where he went to college and starred for the Bearcats. Kelce, who had 10 receptions for 95 yards and one touchdown in the AFC title game loss, is 88 yards away from his seventh consecutive 1,000-yard season.

Chiefs vs. Bengals pick: Over 52.5 total points @ -110 via Caesars Sportsbook 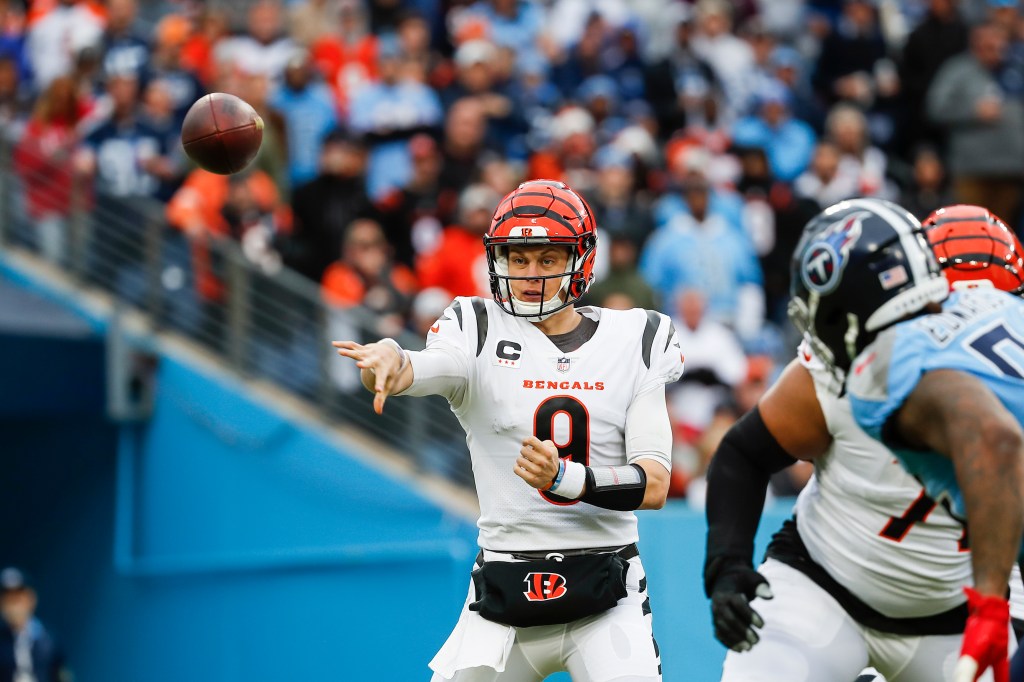 Burrow has thrown three or more touchdown passes four times this season, topped by a four-TD outing against the Steelers two weeks ago. Also not to be forgotten is that Burrow ripped the Chiefs’ defense for 446 yards and four touchdowns in last season’s regular-season victory.

With Chase back on the field, Burrow is even more dangerous, particularly in the red zone. And Chase’s absence allowed Tee Higgins to shine with back-to-back 100-yard outings.

Mahomes also can throw touchdown passes in bunches — he has thrown five once, four twice and three on three occasions this season — which will keep Burrow in launch mode for four quarters.