New York City school kids are losing their minds over the zonked-out drug addicts and raving vagrants they encounter every day – and are flocking to therapists to find ways to cope with the stress, The Post has learned.

In neighborhoods such as Hell’s Kitchen “a lot” of kids are now in therapy, according to mom Katie Hamill, 43, whose 7-year-old daughter is being treated for anxiety.

The little girl gets upset when she sees “the dying people” — the junkies who look dead whom she thinks no one is helping, the mom said. And she sees far too much vile behavior from adults, including one addict trying to rip out his hair after getting high at a West 42nd Street playground.

“My kid asks me to move,” Hamill said. “We have considered leaving the city. It’s hard.”

The city funneled thousands of homeless people to Hell’s Kitchen to living in the area’s hotels after the pandemic started. The move led to high-profile crimes including the brutal March 2021 beating of a Filipino-American woman walking to church allegedly at the hands of convicted killer Brandon Elliot, 38, who was living at a nearby hotel. 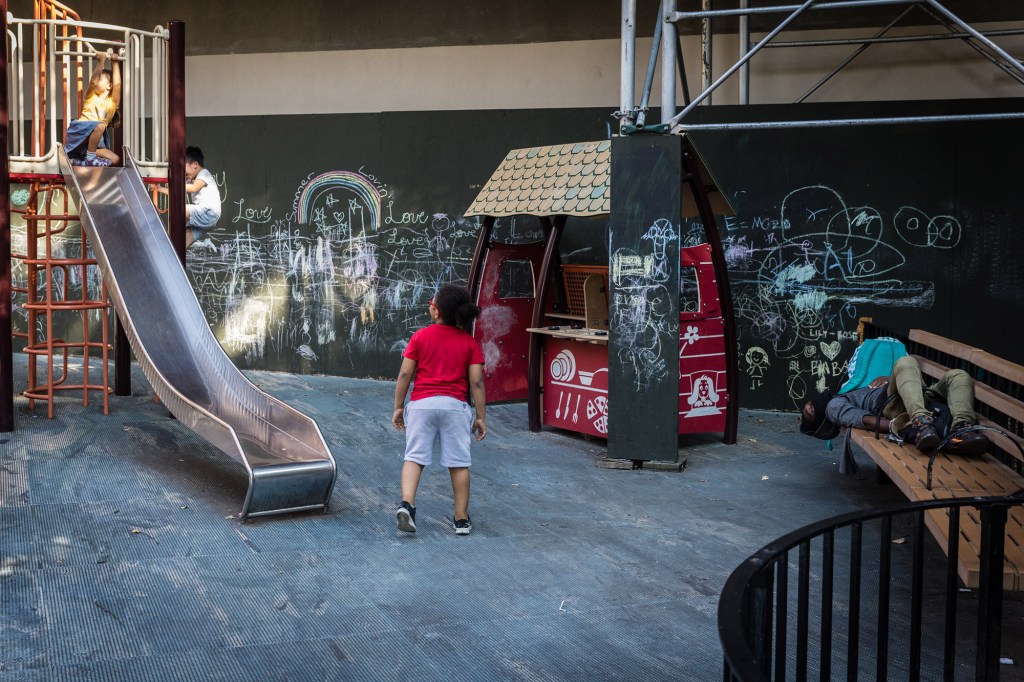 In late August, police charged Nickolas O’Keefe, 33, a shelter resident, with two unprovoked stabbing attacks including one targeting an ER nurse who was knifed in the back.

Exacerbating the qualify-of-life decline is state bail reform, which has caused the release of scores of dangerous accused criminals, as well as the decriminalization of drug paraphernalia which prompted the NYPD to stop detaining junkies shooting up in public.

In Chelsea, mother Cindy Sanders, 47, said her daughter, who attends the city’s Professional Performing Arts High School, saw a therapist through a school program last year for a combination of concerns, including spiraling crime and the sudden proliferation of unhinged hobos.

“I think everything after COVID has added to the amount of stress on them. So it’s very unclear what exactly is causing the stress and anxiety,” Sanders said. “Since they just got back from COVID, the crime rate was higher, and the number of homeless on the streets was higher as well. All of it, I think, in combination created a lot of anxiety.” 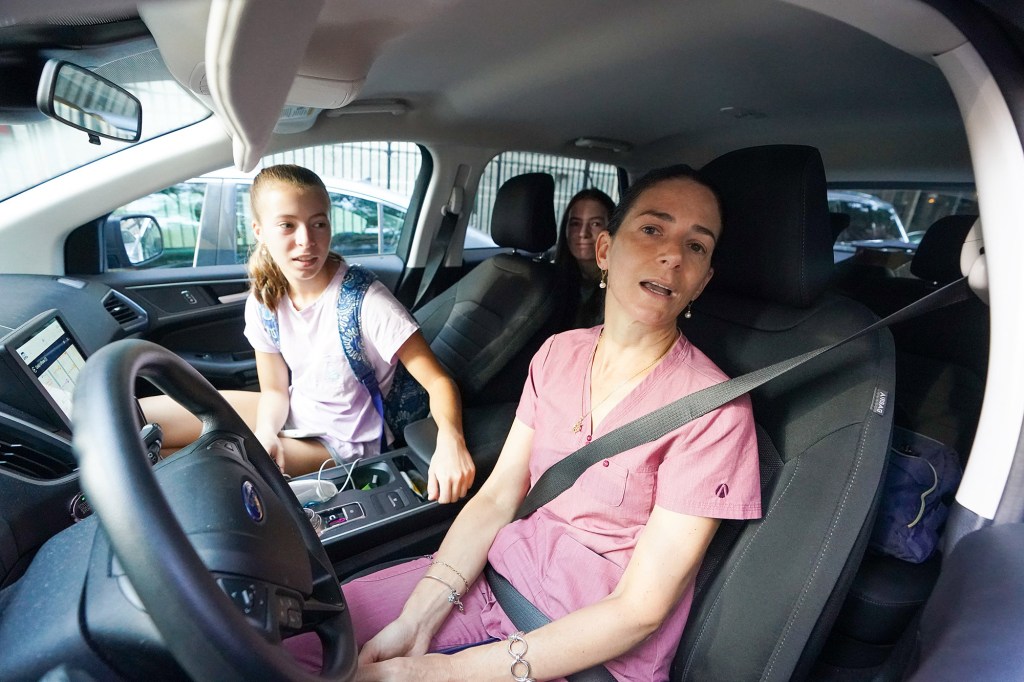 Sanders drives her daughters to the West 48th Street school to keep them safe from the legion of aggressive vagrants, but even that didn’t stop them from being harassed recently.

“A woman … started yelling at us in the car. My daughter was nervous about getting out of the car and crossing the street to go to school,” she said.

Christine Capolupo, 38, a stay-at-home mom who lives in Hell’s Kitchen, and her father, Alex Vado, called police Wednesday when they saw a vagrant asleep on a bench at the Ramon Aponte Playground on West 47th Street near Ninth Avenue.

“It’s terrible especially like this street, in this vicinity, it’s gotten so freaking bad,” Capolupo said. “It’s like in broad daylight you see them shooting up and crazy stuff. It wasn’t like that. It was pretty decent, the neighborhood. I don’t know what’s going on.”

The neighborhood’s current state of affairs is worse than the bad old days, said one lifelong resident and mom whose two daughters are also in therapy.

“My kid is like lunging and attached to me like she wants me to carry her and she is 8 years old. It’s not a way for anybody to live, especially kids,” said the stressed mama, who said her children don’t want to go outside. 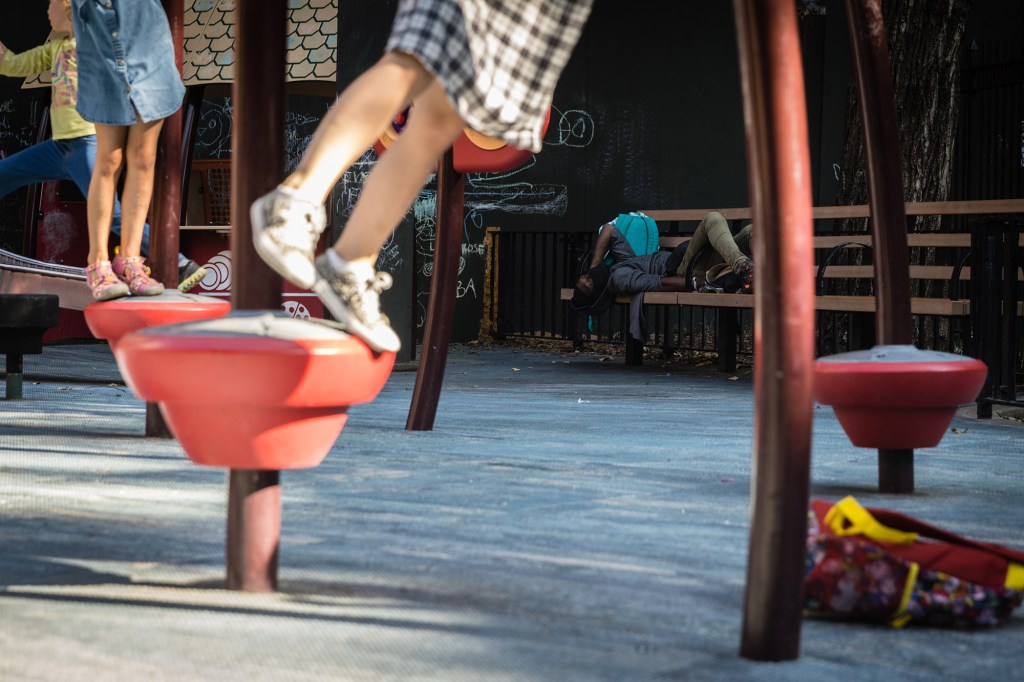 The 43-year-old woman recalled, “a lot of acts of violence when grew I up here.”

“But it was murderers murdering each other. They weren’t attacking innocent people walking in the street – women, kids, elderly,” she said. “It felt safer then.”

Sara Pashmforoosh, 40, an architect, who lives in the East Village, said her 19-month-old son constantly sees people smoking crack on their building’s stoop but is unaware of what is happening.

“When he gets older, I’m like, how am I going to explain what they’re doing?” she said.

Therapists say the toxic combination of pandemic stress and daily doses of depravity is creating a veritable Generation Angst in the Big Apple.

“It’s a lot of change and having these people in the neighborhood — that’s a part of that change,” said Dr. Judith Fiona Joseph, a Manhattan psychiatrist who treats children from all over the city. “I do think it’s one of the stressful changes that the post-pandemic era has brought to the city.”

Joseph also noted that children are naturally more empathetic and that  “It can be stressful, especially with the sensitive children in my practice — they do voice concerns about seeing people suffering in the streets, people who are not getting treatment and they feel that they want to do something about it.”

Psychologist Taylor Chesney, director of the Feeling Good Institute on the Upper East Side, said the worsening street conditions take a toll on parents, too.

Some families are coping by picking up and leaving.

One study found that families with young kids led the flight from major US cities in the first two years of the pandemic. Manhattan saw a 9.5% decline in children under 5 since 2019. Total New York City public school enrollment has dropped by 73,000 since the start of the pandemic.

Justin McShane, 38, who works in finance and development, left Hell’s Kitchen for New Jersey in February after a rent increase and the surge in violence and drug use in the neighborhood. 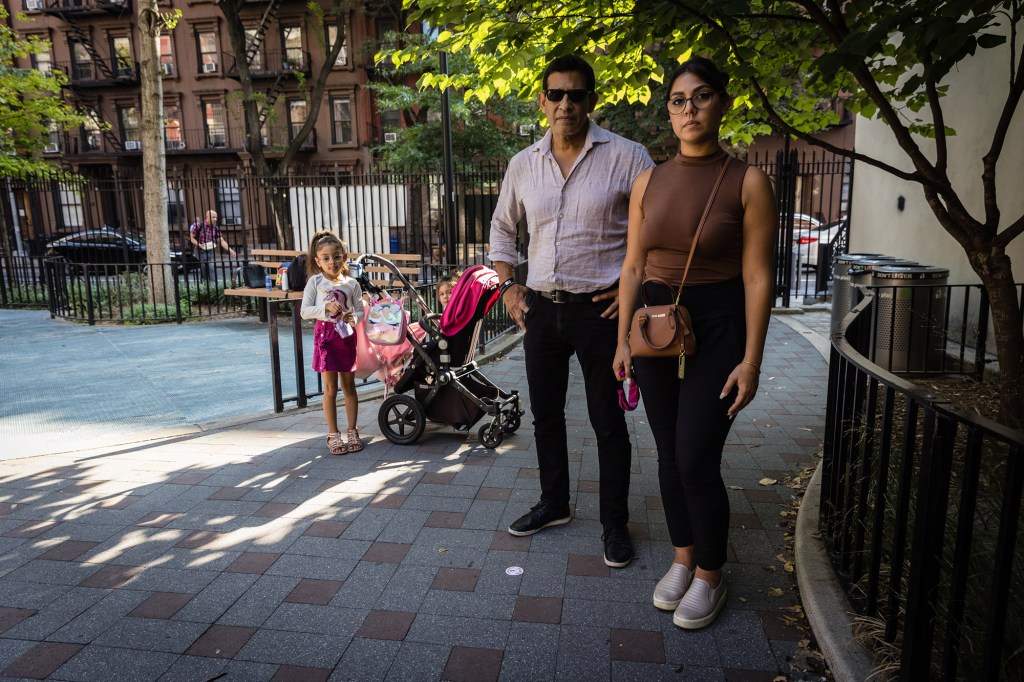 “There’s almost like a blissful ignorance within the leadership. It starts with the mayor obviously and no one wants to prosecute anybody. So, you know, everyone feels like they can just run amok without any disincentives,” McShane said.

Joseph Giacalone, a retired NYPD detective sergeant and adjunct professor at John Jay College, said the city is seeing the impact of moving away from enforcing quality-of-life concerns.

“Yes, the little things do matter, because the impact on other people — whether it’s crime, or in this case psychological — these things can be avoided,” Giacalone said. “There’s always a cost to something, whether it’s a cost in crime or a cost in therapy. This is what many of the reformers don’t understand.”

Kimyra Garel, 32, a chef, and partner Ernesto Santana, 34, a delivery driver, moved from the Big Apple to Newark last year with their twins, “just to get out of New York because it’s too much craziness.”

The couple returned Friday and brought the boys, who are 8, to play at Washington Square Park, but kept them close.-

“Usually they run around. We don’t hold their hands. I have not let go of their hands. I’m so scared. You don’t know what’s going on now,” Garel said.