Most weekends from around 8 am to 2 pm, Lou’s Restaurant & Bakery is packed. Some choose to pick up a pastry and a cup of coffee at the quick service area near the front of the restaurant. For those who want to dine in, there are classic 1950s diner booths, but they’re often filled with hungry students. Most of the time, down the center of the dining room there’s a line of Dartmouth kids and locals waiting to be seated.

But since the coronavirus outbreak forced students to leave Dartmouth’s campus, the booths at Lou’s have remained empty. Hanover, New Hampshire, is a small town with a tight-knit community, where local businesses rely on college students to survive.

“It still is a little bit eerie that the dining room is just empty all the time,” said Lou’s owner Jarret Berke. 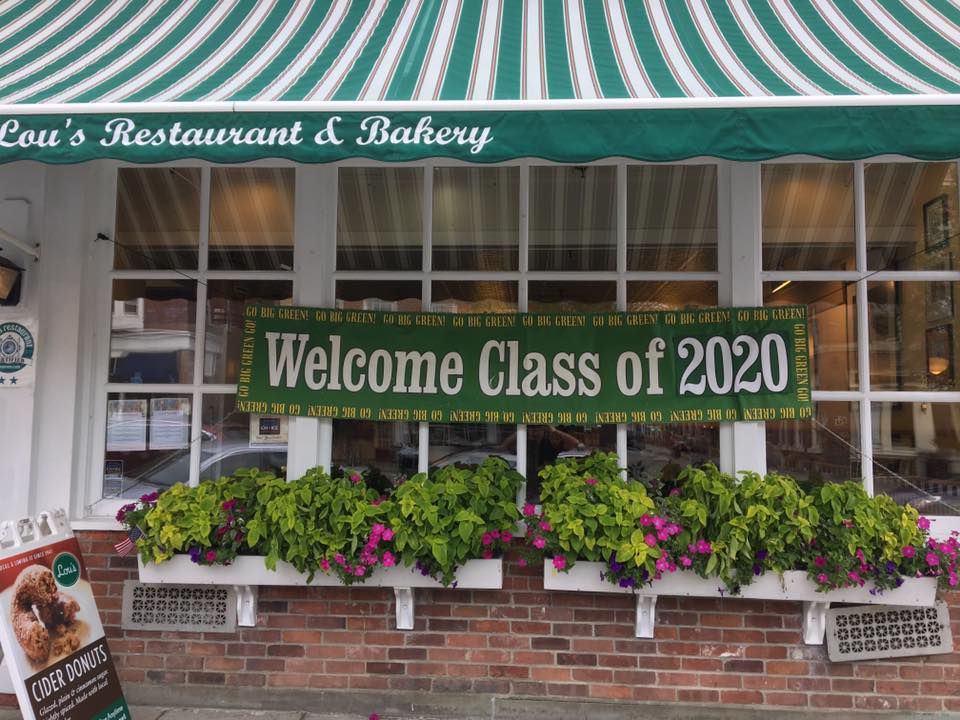 The Covid-19 pandemic forced college students around the country to evacuate campuses in mid-March. Many departed for spring break and never returned. Professors scrambled to move courses online, students moved home or off-campus for the remainder of the spring semester with no clear return date in sight, and seniors had their graduation ceremonies canceled as colleges and universities were forced to navigate higher education in a remote world.

But when students left school, they abandoned more than just messy dorm rooms. Local businesses in college areas suffered economic losses as their regulars finished the academic year from their homes all over the world.

“A big chunk of our customer base left town so it made it very difficult,” Berke said. “Initially, after the students left, when really the whole country went into lockdown, we saw about a 70 percent decline in sales.”

By innovating and finding new sources of revenue like takeout and revised menus, Lou’s now is able to maintain around 75 percent of its normal sales.

“We’re still not doing great. We still would love to have the students back, but it’s enough that we can survive for a while,” Berke said.

In a 2017 article for the Atlantic, Alana Semuels explained how, in recent years, small colleges have been thought of as mechanisms to save and develop local economies: “The main benefits of educational institutions are twofold: They often produce research and technology that can be parlayed into new businesses, creating jobs nearby. And they bring to the area students, who spend money on restaurants and services, and attract professors and administrators, who do the same and also buy houses and cars,” Semuels wrote.

As Gallup’s principal economist Jonathan Zeller told Vox, the reality of the pandemic and college students leaving campuses will significantly impact the cities and towns where they’re located. Zeller explained that college towns and neighborhoods are appealing places to move to because of local restaurants, coffee shops, and bookstores. But those businesses need students to be successful.

“If that source of demand disappears for an extended period of time, those businesses are going to disappear, and that’s going to make that neighborhood a much less attractive place,” Zeller said. “It’s going to have just overall depressing effects on the local economy.”

“If that source of demand disappears for an extended period of time, those businesses are going to disappear”

When students are away from home, they often find comfort and community in local restaurants and cafes surrounding college campuses.

Tim Norris, the owner of Mom’s Dream Kitchen, a Southern cuisine restaurant in Jackson, Mississippi, said that students from nearby schools like Jackson State University often gravitate toward the home-cooked meals at his restaurant.

“They wanted home cooking because they were away from home,” he said.

But like other local restaurants, Mom’s Dream Kitchen suffered from the loss of student customers.

“Since the pandemic, school pretty much shut down so a lot of our college students were no longer on campus, so we lost a lot of business,” Norris said.

The sharp decline of local businesses in college towns has impacted Americans all over the country. Restaurants and shops near Bowdoin College were described as “reeling” after students left campus. Businesses near the University of North Carolina at Chapel Hill considered closing. The neighborhood surrounding the University of Pennsylvania “lost its life.” Some colleges and universities have even stepped in to help temper the effects of students leaving campuses by waving rent expenses for businesses that lease commercial spaces from them. Cornell University gave $100,000 to a fund in order to support Ithaca businesses.

Students and alumni have also made efforts to save local restaurants and shops as the pandemic costs them significant revenue. Middlebury College alum Nicholas Milazzo launched a GoFundMe that has raised more than $10,000 for five Middlebury, Vermont, restaurants. Milazzo, who formerly worked as an EMT and is applying to medical school next year, wanted to find a concrete way to make a difference without putting his family at risk of contracting the virus.

“Middlebury already has trouble keeping its businesses going just because they’re so reliant on the students, and the students are gone for half the year,” Milazzo said. “So I figured, well, if restaurants in New York City are getting hit hard, I bet the same is happening in Middlebury.”

Milazzo started distributing the money among five local businesses around a month ago, with each receiving more than $2,000.

“Right away, a lot of people, before they left or when their families were picking them up, got gift cards or bought gift cards online,” said Matthew Delia-Lobo, co-owner of Royal Oak Coffee in Middlebury. The GoFundMe cash, he said, was “insanely helpful.”

Royal Oak, which Delia-Lobo opened around a year ago with his wife Alessandra, mainly employs students from Middlebury College. When their employees had to leave campus, the Delia-Lobos were forced to run Royal Oak alone. They also lost revenue they usually make from graduation events and summer programs, both of which were canceled. Royal Oak has two locations, and because of the lack of business, the Delia-Lobos had to temporarily close the one closer to campus.

“Both of us just hustled and worked every single day”

“Both of us just hustled and worked every single day,” Alessandra Delia-Lobo said.

Until students can return to college campuses, local businesses are finding new revenue streams to survive. Lou’s, for example, created a dinner menu targeted toward families, and Mom’s Dream Kitchen has been doing more delivery orders through GrubHub, Waitr, and Uber Eats.

As some colleges prepare to bring students back to campus in the fall, businesses are reimagining what their day-to-day will look like. At the same time, they are grappling with fears surrounding the risks of bringing students from all over the world back to college campuses.

“A big kind of draw to any coffee shop in a college town is ‘I can sit and study or do homework,’ or, you know, sit inside and socialize,” Alessandra Delia-Lobo said. “So I’m a little worried that, you know, that draw won’t be there if we can’t open inside, because I’m worried things won’t improve fast enough.”

Business owners remain cautiously optimistic about their prospects while harboring fears about the dangers of reopening during a pandemic. While many colleges and universities are doing whatever it takes to get students back on campus, from dorms on tennis courts to contact-tracing apps, there is no way to ensure safety until a vaccine is widely available.

“The thought of a couple thousand people from all over the country, all over the world, coming into Hanover where we haven’t had an active case in about four weeks, it’s a little scary,” Berke admitted.

Every day at Vox, we aim to answer your most important questions and provide you, and our audience around the world, with information that has the power to save lives. Our mission has never been more vital than it is in this moment: to empower you through understanding. Vox’s work is reaching more people than ever, but our distinctive brand of explanatory journalism takes resources — particularly during a pandemic and an economic downturn. Your financial contribution will not constitute a donation, but it will enable our staff to continue to offer free articles, videos, and podcasts at the quality and volume that this moment requires. Please consider making a contribution to Vox today.

Lone mascots are another symbol of the year
Casemiro: bale is the top 3 in the world at his best level. But we must admit that he is not in the best shape right now
Ferran Torres: Every player wants to be in the attacking team, and city are one of the most attacking teams in the world
Manchester City have announced the transfer of Ferran Torres from Valencia
German Count Zeppelin, heated underpants and Herbert Chapman. The final that started the great Arsenal of the 1930s
Klopp has signed a contract with adidas. Liverpool have an agreement with Nike
Jose Mourinho: Casillas and I have a good relationship. Over the years, they developed into an honest friendship
Source https://www.vox.com/the-goods/21319997/coronavirus-college-reopening-small-businesses

In Apple TV+ series, Oprah Winfrey says being White 'gives you an advantage no matter what'

I’m a sexy silver fox and babes half my age are all over me: ‘It’s a daddy thing’

Pixel 4a's camera game is strong as usual; see for yourself

Alabama proceeds with plan to remove artifacts from Clotilda

At least 50 killed, hundreds hurt in massive blast in Beirut

How to stay upbeat on rainy days, even in a pandemic

'Kindergarten Cop' screening canceled in Oregon, compared to 'Gone with the Wind'

Kanye West Dropping Effort To Get On New Jersey's 2020 Ballot

Woods in a better place heading into this PGA Championship

AFM, a Biennial Polio-Like Viral Illness, Is Expected to Hit the U.S. in 2020

Not your average job: City of Birmingham looking to hire a Zamboni driver

Live Isaias Updates: Tracking the Storm as it Charges North

Senate could be in session until deal reached on coronavirus bill

Lions: Matthew Stafford had false-positive test for COVID-19, is not infected

'We have nothing left'

Gulf of Mexico's 'dead zone' much smaller this year

'We have nothing left': Residents describe apocalyptic scenes

Over 25 killed, hundreds injured in massive blast in Beirut

Upgrades planned for a critical length of DC-area sewer pipe

Streetwear Culture Goes to the Dogs

Flying during coronavirus pandemic: Florida CEO has been on 33 flights this year, and stayed safe

Stream It Or Skip It: ‘The Swamp’ on HBO, a Revealing Look at DC Politics

Restaurants Are in Trouble. Sustainability Hacks Can Help.

Video shows Black children handcuffed face down on the pavement

National Security Advisor Returns to Work After Recovering From the Coronavirus

Husband of DA charged with pulling gun on protesters in LA