Chef David Chang has become the first celebrity to win the big $1 million prize on “Who Wants to Be a Millionaire.”

On Sunday, the famous chef, author and TV personality was playing on the show’s celeb edition in order to win the money for the Southern Smoke Foundation, a crisis relief organization for people in the food and beverage industry.

His winning question, for which he risked half the pot ($500,000), was, “Although he and his wife never touched a light switch for fear of being shocked, who was the first president to have electricity in the White House?”

The choices were A) Ulysses S. Grant, B) Benjamin Harrison, C) Chester A. Arthur, or D) Andrew Johnson.

The correct answer was Benjamin Harrison, the 23rd president of the United States who only served one term (1889 to 1893).

Chang, 43, came to the answer by using “phone a friend” and dialing up help from ESPN’s Mina Kimes, who guessed correctly.

It was an emotional moment for Chang, who is best known as the founder of the Momofuku restaurant group and his Netflix series “Ugly Delicious.” During the coronavirus pandemic, he’s given impassioned talks about the suffering restaurant industry.

“I’m doing this because having a million dollars right now, at this moment, is a game-changer for many families,” he said on the show, which is hosted by Jimmy Kimmel.

“As much as I want to walk away, and the embarrassment I would have for the rest of my life for getting it wrong, it would mean more to me to get this right to put a spotlight on the industry in need,” Chang said. “And, at this point, the way things are — things are pretty bad. I never imagined I’d be in the position. And I’ve always told myself I’m going for the million bucks. So I’m gonna let my stupid confidence — bravado — win out.”

Taking the risk worked, and he scored a big payday for people in his industry.

An elated Chang fist-bumped Kimmel and held up the giant million-dollar check, shouting, “I can’t believe this!” 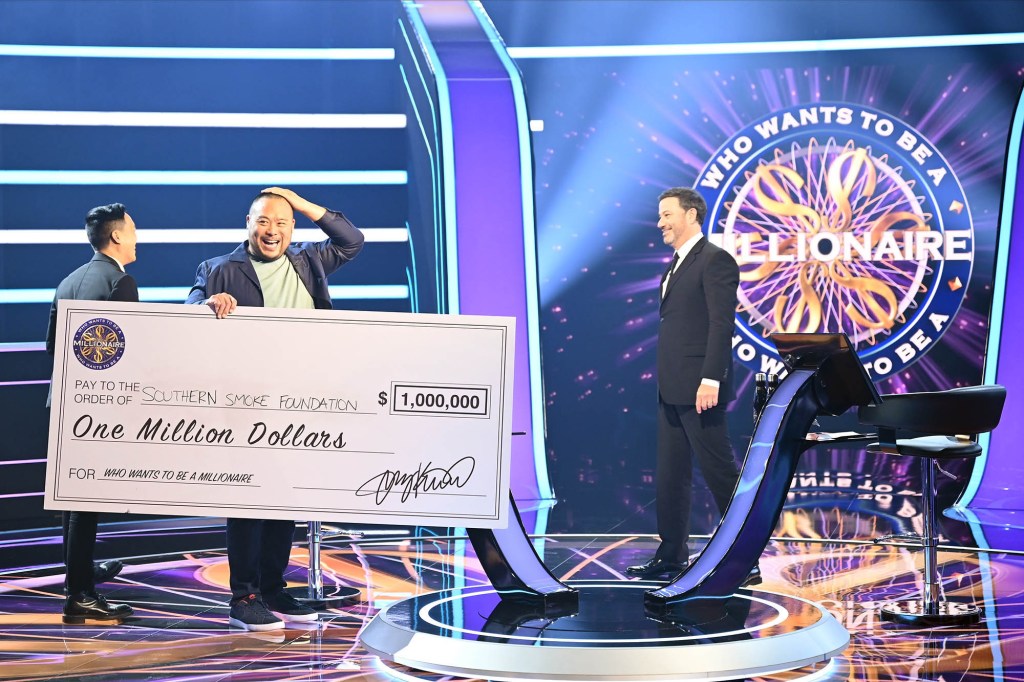 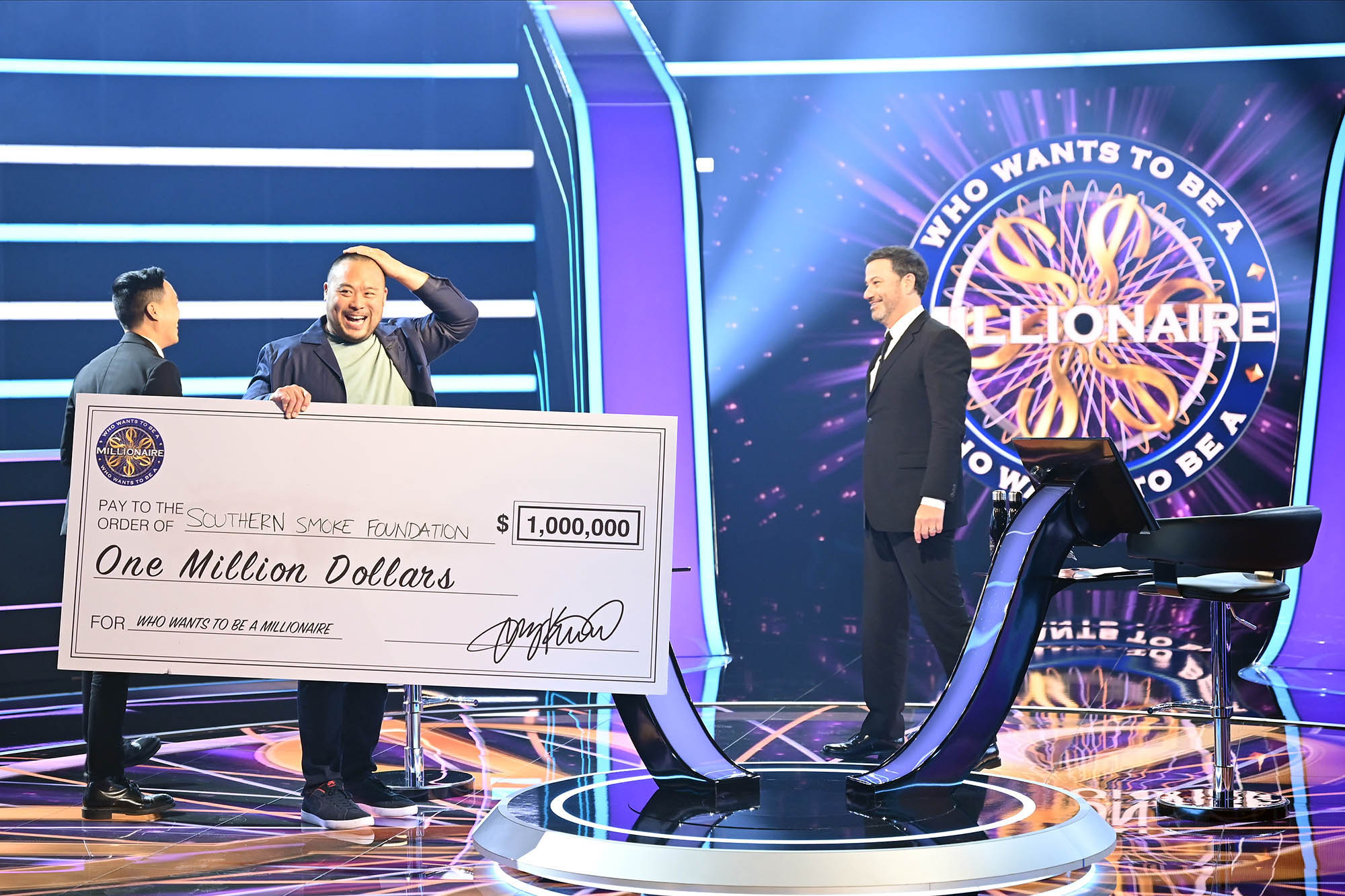 An astonished David Chang displays his check for $1 million on "Who Wants to Be a Millionaire." 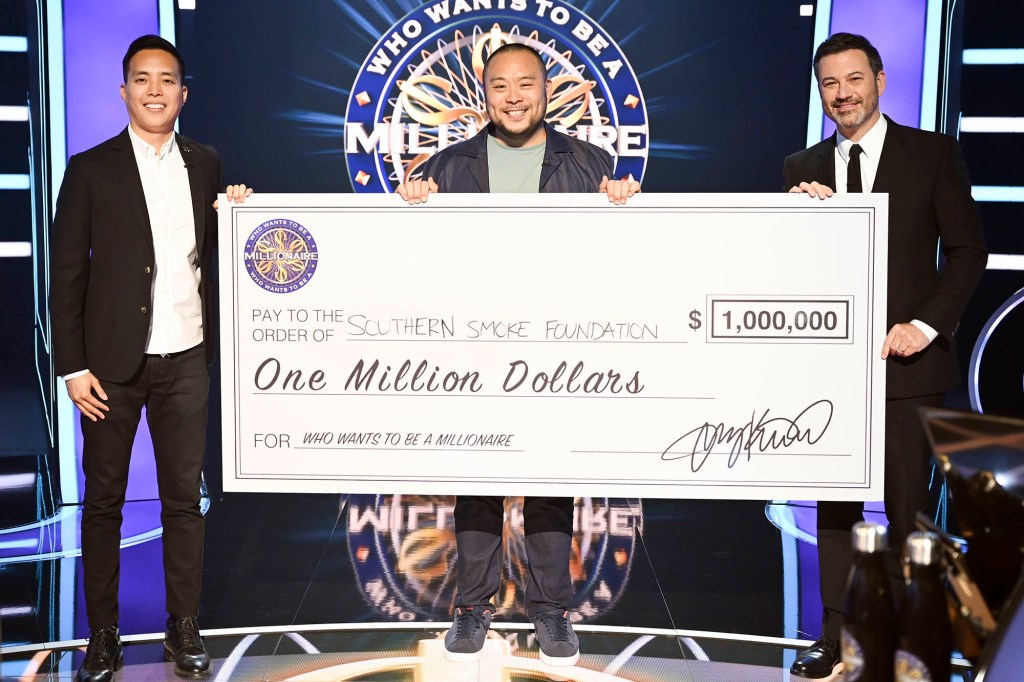 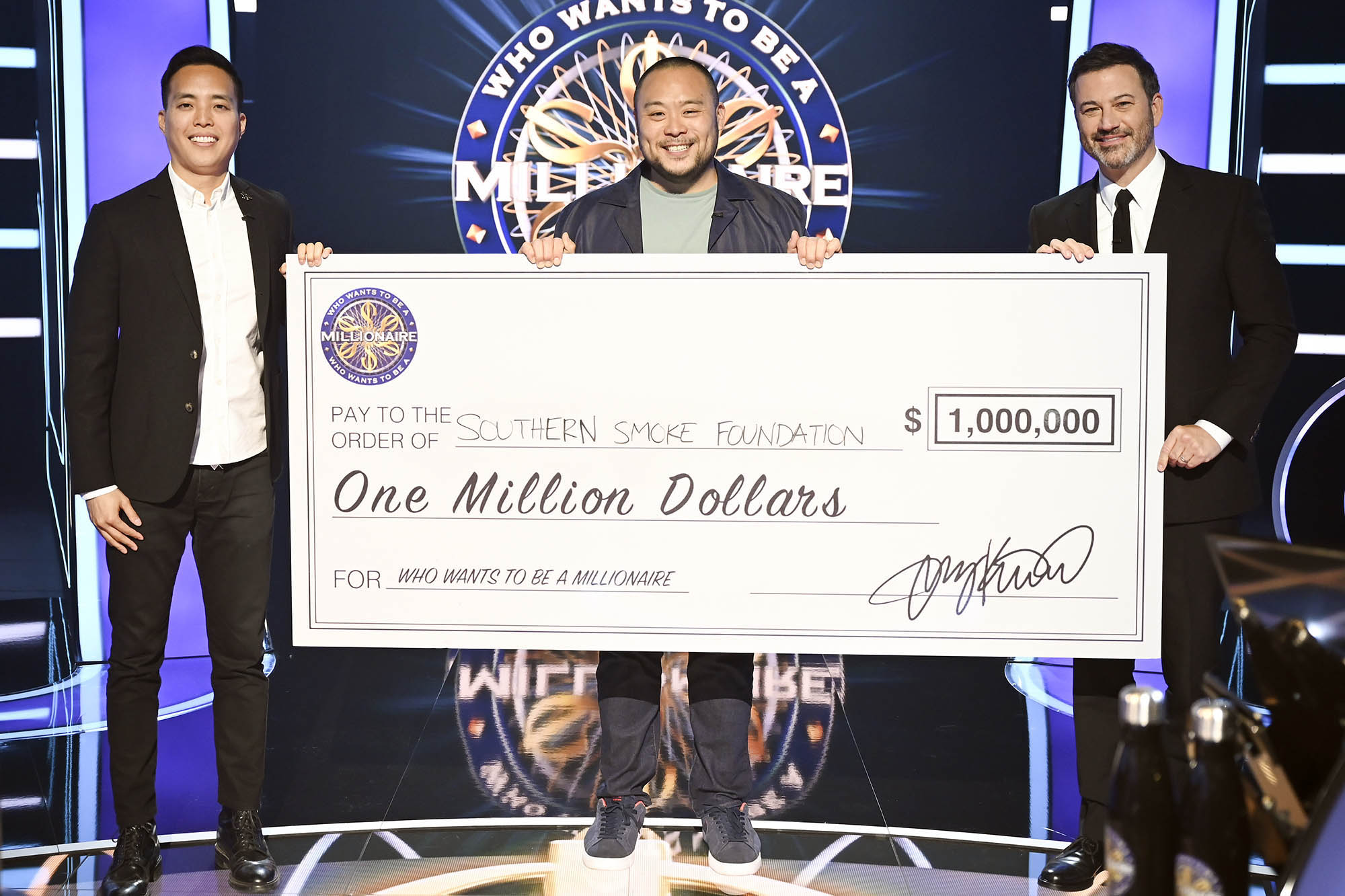 Alan Yang, David Chang and Jimmy Kimmel show off Chang's $1 million win on "Who Wants to Be a Millionaire." 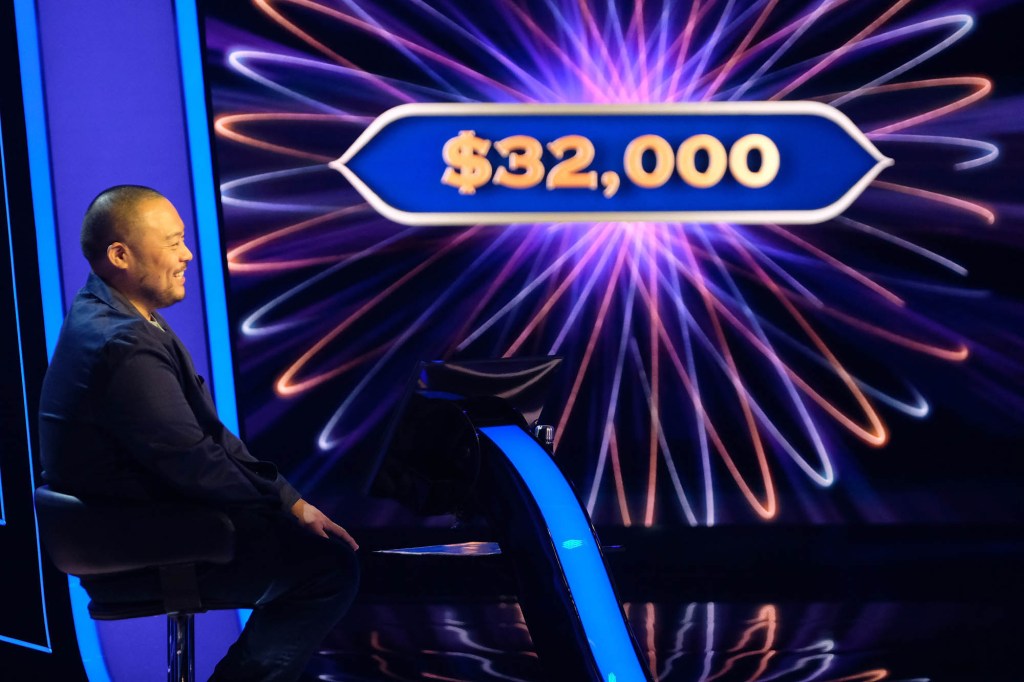 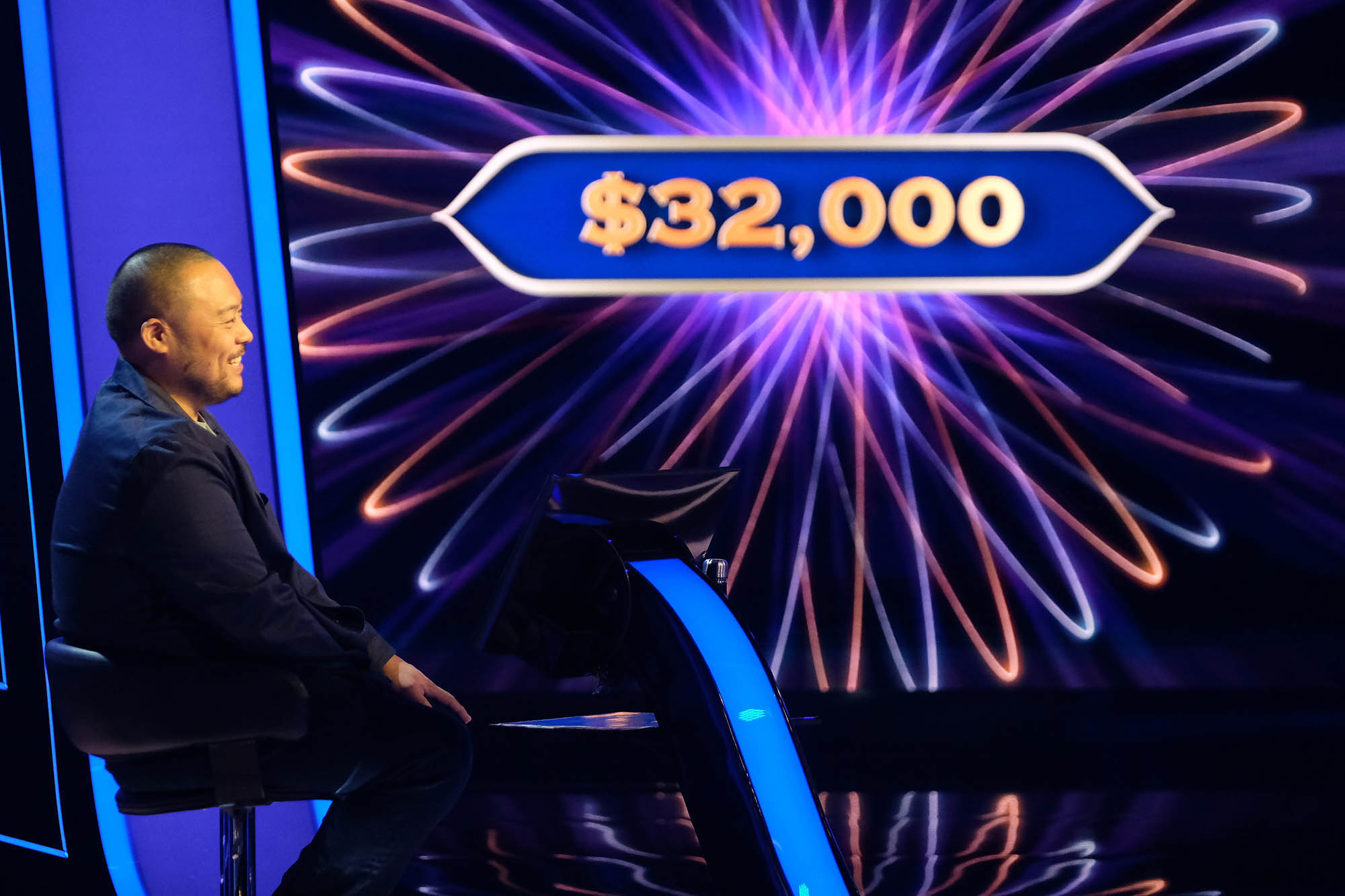 Aubameyang may miss the match against Manchester United. His mother is sick
The PFL is a football UFC. KAMAZ offered Khabib a place in the team
The Premier League will lose the competition for juniors after Brexit. And permits for foreigners in vain feared - they are easy to obtain (although Kant and Solskjaer coach would not be able)
Solskjaer pro 1:2 with Sheffield: We should be criticized, because there is no result. The guys have been great for a few months
Juve congratulated Buffon on his 43rd birthday: Happy birthday, Superman!
Semin about Miranchuk: Well done, fighting for his future! It stands up to the competition in Atalanta
Jose Mourinho: I'm not a friend of Klopp, but I have no problems with him
Source https://nypost.com/2020/11/30/david-chang-first-big-celeb-champ-on-who-wants-to-be-a-millionaire/

U.S. Economy Report Card for 2020 Should Be Better Than Predicted

Don’t Despair the Survival of the Filibuster

The Fate of the Filibuster

US: Germany is ‘highly valued’ station for American troops

Help! My Sons and I Want My Daughter to Dress More Appropriately.

Include Punjabi as official language in J&K: Punjab CM writes to PM Modi

Ask a Teacher: My Kids’ Teachers Refuse to Return to School Even After Vaccination. What Am I Missing?

The Biden Administration Is Repealing the Global Gag Rule. That’s Not Enough.

The Little Things Is Shameless Copaganda

How Is The COVID-19 Vaccination Campaign Going In Your State?

Virginia parent boils over in frustration against school shutdown: video

Trump tried to 'booby-trap' Medicaid expansion. Biden now has a fight ahead.

Establishing Trust in 2021: Innovation and an Imperative for Embracing Data Privacy, Transparency and Security

Republican Rep. Kinzinger: I voted to impeach 'knowing ... it could very well be terminal to my career'

Vaccination Day at Dodger Stadium: Hours of Traffic and 7,730 Shots

“Take every shift as it comes”: No respite for UK hospitals

So You Want to Open a Hotel? Now?

How the Coronavirus Turns the Body Against Itself

Here’s What We Would Nominate for Best Picture

‘The Capitol Insurrection Was as Christian Nationalist as It Gets.’

From Michael Lewis, a ‘Superhero Story’ About the Pandemic

The New Virus Strains Make the Next 6 Weeks Crucial

4 Things to Know About the GameStop Insanity

What if the ‘Karate Kid’ Isn’t the Hero?

What Can Covid-19 Teach Us About the Mysteries of Smell?

Why a Trump Third Party Would Be a Boon for Democrats

How Do We Regain Trust in Institutions?

German Neo-Nazi Sentenced to Life for Murder of Merkel Ally

Senate weighs jumping Biden judicial picks ahead of the queue

Shark and ray populations have dropped 70% and are nearing 'point of no return,' study warns

Snow blindness can sneak up on you, but prevention is easy