Some 4 million dogs in the U.S. are diagnosed with cancer every year, often the same kinds humans get. And since we share many of the same genes with our canine companions, dogs with naturally developing cancers are being enrolled in clinical trials, with doctors and scientists using what they learn to speed potential treatments to them and us. It's called comparative oncology and it's now funded in part by the White House's Cancer Moonshot Initiative.

This week on 60 minutes, correspondent Anderson Cooper met scientists from the National Institutes of Health as they collected DNA samples at a dog show in Connecticut. Leading the team was Elaine Ostrander, a senior geneticist at the NIH.

"Dogs live in our world. They get all the same diseases we do. They eat our food. They're exposed to the same environmental pollutants," Ostrander told Cooper. "But they also have all the same genes that we do. And they have mutations in those genes that make them susceptible to everything you and I get - whether it's diabetes or cancer or neuromuscular diseases. Everything humans get, dogs get." 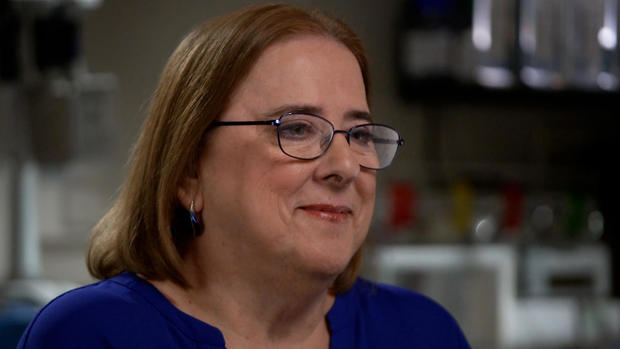 Ostrander said it's easier to study genes in dogs than humans because for the last 200 years they've been bred to emphasize specific traits like distinct noses, tails and sizes.

"So before Victorian times," Cooper asked Ostrander, "dogs were pretty much the same?"

"There was some variation," Ostrander said. "We know that from fossil and archaeologic records, but almost all the variation you see running around in-- in the rings today, that's all happened in the last 200 years."

"So that means it's probably gonna be a really small number of genes responsible for most of the major differences," Ostrander continued.

It turns out just one gene determines if a dog has cream colored hair or black. Other genes determine long hair or short. And Ostrander's team at the NIH has discovered some physical traits in dogs, like ear position, hold surprising clues about human health.

"This was a study looking at prick ears versus floppy ears. And that's due to a mutation in-- in one gene called MSRB3," Ostrander said. "But what's really interesting about this story is that when this gene is perturbed or more dramatically mutated in humans, we get a form of deafness."

Ostrander said some of the most promising genetic research in dogs involves cancer.

Some breeds get certain types of cancers more often -- making it easier for researchers to locate some of the genes responsible. Scottish terriers, for instance, are about 20 times more likely to get bladder cancer than the average mixed breed dog.

"If I were to look at a group of humans with bladder cancer, the story would be so much more complex," Ostrander said. "There would be different genes in different populations. There'd be different mutations. Different contributions of environmental effects. So when I look in one breed, I get much simpler stories."

Dogs are diagnosed with many of the same cancers found in humans - lymphoma, melanoma, brain cancer, breast cancer and the deadly bone cancer osteosarcoma.

Osteosarcoma is aggressive and malignant. More than 10,000 dogs in the United States are estimated to get it each year, but only about 1,000 people are, mostly children and young adults. 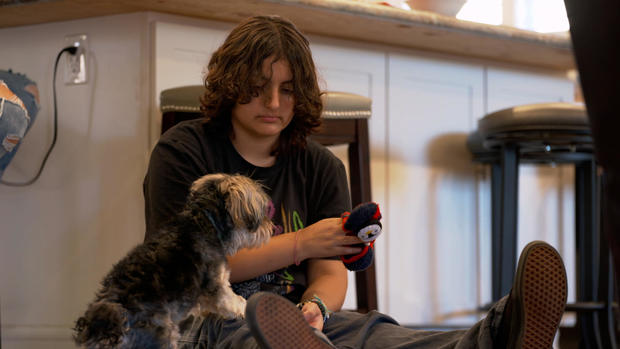 Krystie Gomes with her dog, Benny

Krystie was used to getting bruised on the soccer field, so she and her mom, Kathy Feder, chalked it up to a sports injury. But after months of physical therapy, her doctor discovered osteosarcoma had eroded most of Krystie's thigh bone.

Doctors removed the remaining bone and replaced it with a 9-inch metal rod. Months of grueling chemotherapy withered Krystie to 72 pounds. Then, her pediatric oncologist Dr. Elyssa Rubin said, the cancer came back - this time in Krystie's lungs.

"Patients, once their tumor comes back, are at a really high risk, probably 80% of the time will get new tumors," Rubin said.

"Have there been a lot of new treatments for osteosarcoma?" Cooper asked.

"Unfortunately, no," Rubin said. "We've been using the same chemotherapy for about the last 60 years or so."

"Is that because it's a rare form of cancer?" Cooper asked.

"Yeah. It's harder to study 'cause there's smaller number of patients to, you know, study in large trials," Rubin said. "And also since it's rare, not a lot of funding of-- goes to a lot of trials for it."

But there were trials in pet dogs of an experimental immunotherapy treatment for osteosarcoma that began in 2012, led by University of Pennsylvania professor and veterinarian Dr. Nicola Mason.

"This is listeria, causes food poisoning," Mason said. "This particular listeria has been genetically modified so that it is far less virulent." 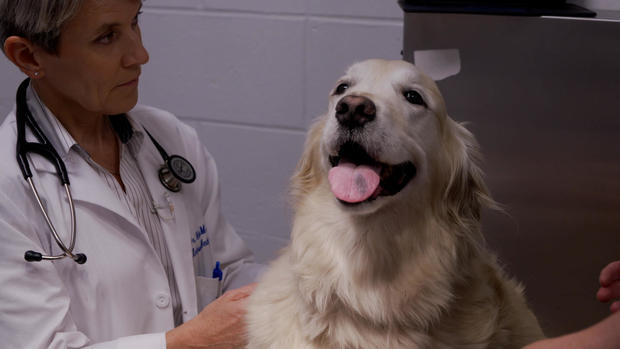 The listeria had also been modified to contain a specific protein -- called HER2 -- that's found on some osteosarcoma cells. Once injected into the dogs' bloodstream, the listeria awakened their immune systems, making them feel sick. It also triggered killer immune cells to patrol the body and destroy the cancerous cells.

Sandy, a 9-year-old golden retriever, joined a nationwide trial in 2018. She'd had her front leg amputated because of osteosarcoma. During the trial, Dr. Mason said, Sandy's immune system reacted to the listeria just as she'd hoped.

"Her body temperature started to increase, peaked around about four hours, and then started to drop down again," Dr. Mason said. "We sort of want to see that because it tells us that the immunotherapy is in fact stimulating her immune response, which is what we want to happen."

When Sandy was first diagnosed, her life expectancy with the standard care of amputation and chemotherapy was around a year. But that was four years ago and Dr. Mason said there's no sign of cancer.

Other results from the first listeria trial in pet dogs were encouraging too, showing the dogs "tolerated" the immunotherapy and that it "significantly increased duration of survival time." Those results were submitted to the Food and Drug Administration.

"When the infusion's actually happening," Cooper asked her, "do you remember it afterward? Or, do you basically sleep through it?"

"Just sleep. And then when I wake up, it hits like a truck," Krystie said. "Bad headache and nauseous. And I hate nauseous and headache, two things I don't like. And it's two things guaranteed."

First, Krystie was given medications that made her sleepy. Once she was dozing, the listeria started dripping into her IV. An hour later, that truck krystie was talking about hit her. Hard.  But similar to what happened to Sandy, the golden retriever,  the listeria appeared to awaken Krystie's immune system.

After ten minutes, her headache got better. A few hours later, she was able to leave the hospital.

The National Cancer Institute is spending more than $20 million to analyze cancer samples from pet dogs all over the country and oversee comparative oncology trials to improve treatments in humans and dogs.

Krystie, who's now well into her freshman year in high school, had no signs of cancer in her last scan. She continues to get immunotherapy every three weeks. Between treatments and homework, you'll find her with her yorkie, Benny, a gift from her mom, Kathy Feder. One more dog that's helping her in her recovery.

"It's kind of amazing to think that you're both on the cutting edge of medicine," Cooper told Feder.

"I know," Feder said. "And I don't think she realizes how important this is."

Couple’s gender reveal uses a toilet: We ‘wanted something different’

Why Bonnie Raitt Deserved Song of the Year at the Grammys

Opinion: The head scratching anomaly at the heart of the Proud Boys

At my parents' house in Turkey, it felt like the shaking would never end

Bill Maher jokes about ‘Overtime’ debut on CNN: ‘Did they go nuts?’

Salman Rushdie breaks silence after attack: I have PTSD, nightmares

Americans have low confidence in leaders, GOP at risk in political disputes: POLL